Lindsay Hassett had the unenviable job of replacing Don Bradman as captain of Australia, but his approach won friends and admirers.

Lindsay Hassett followed Bradman both as captain of Australia and as the embodiment of the national tradition of pocket-sized batting geniuses. He was of course nowhere near Bradman’s class as a batsman, but the two men differed most in their approach to life: Hassett was far more light-hearted and puckish. In 1953 he surrendered the Ashes to England but his team won many friends.

Hassett was born at Geelong and was a brilliant sportsman at Geelong College. His name first got noticed when he was a 17-year-old, scoring 147 not out for Combined Victoria Country XI against the West Indians in 1930/31 (it was not noticed everywhere:Wisden called him Bassett), but it took him several more years to establish himself in Victoria’s first team.

In the early 1930s he had a spell of seven ducks for South Melbourne – and he reckoned he was plumb lbw and dropped twice when he was still in line for his eighth. He made 150 and never looked back. He was chosen to tour England in 1938 and had the chance of 1,000 in May. The runs dried up but nonetheless he played in every Test of the series, the first four of his 43 Tests.

In 1945 he was chosen to lead the Australian Services to Britain for the Victory Tests. He declined a commission and did it all on a sergeant-major’s pay of 12 shillings a day. The tour was hugely popular and re-established cricket’s role in public life.

He began the 1946/47 series against England with a stand of 276 with Bradman, though it was a grinding performance compared to the batting styles of the 1930s. Hassett, like the game itself, had changed. Before the war he was a quick-footed attacking player, reliant on the cut and pull, as one would expect from someone of 5ft 6in, but he was also famous for his ability to take on Bill O’Reilly and hit him over the top. 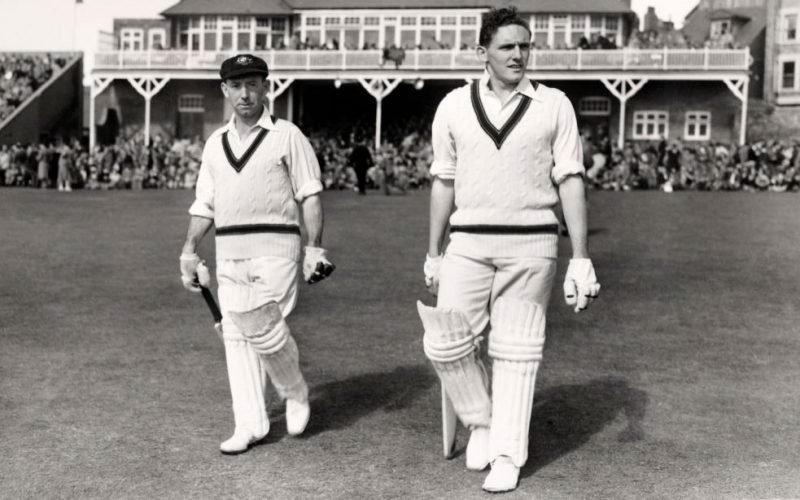 Lindsay Hassett (left) and Alan Davidson walking out to bat at Scarborough, circa 1953

Now he was much more patient and cautious. In 1948 he became Bradman’s vice-captain and his 137 played an important role in the victory at Nottingham that set the tone for the series. It was said he was chosen as Bradman’s successor by only one vote. It may have been remembered that, among other pranks, he had once tied a goat to Bradman’s bed.

But he was highly successful against South Africa, West Indies and England and his batting remained absolutely staunch. He was 40 at the end of the 1953 tour of England but had scored centuries at Trent Bridge and Lord’s. When he finally lost the Ashes, he made a gracious and humorous speech, having been introduced as “The Happy Warrior”.

“There are others who have made more runs and taken more wickets, but very few have ever got more out of a lifetime”

He was a quick, smart fielder. Cardus described his century at Lord’s in 1953 as “four and a half hours of cricket so fashioned that the watchmaker’s eye was required to detect a loose screw or loose end here or there.” He once remarked in a press box during a boring passage: “I’m glad I wasn’t up here when I was down there.” “There are others who have made more runs and taken more wickets, but very few have ever got more out of a lifetime,” wrote Richie Benaud. As an epitaph, “Happy Warrior” will do nicely.