Learie Constantine was one of the first great cricketers to emerge from the Caribbean, but he was much more than that. After his death in 1971, Wisden published this assessment of a remarkable life.

The parents of the child born in Diego Martin, Trinidad, almost 70 years before, may in their highest ambitions have hoped that he would play cricket for the West Indies. They cannot have dreamt that he would take a major share in lifting his people to a new level of respect within the British Commonwealth; that along the way he would become the finest fieldsman and one of the most exciting all-rounders the game of cricket has known: and that he would die Baron Constantine, of Maraval in Trinidad and Tobago, and of Nelson, in the County Palatine of Lancaster, a former Cabinet Minister and High Commissioner of his native Trinidad.

Learie – or Connie to 40 years of cricketers – came upon his historic cue as a man of his age, reflecting and helping to shape it. He made his mark in the only way a poor West Indian boy of his time could do, by playing cricket of ability and character. He went on to argue the rights of the coloured peoples with such an effect as only a man who had won public affection by games-playing could have done in the Britain of that period.

Learie Nicholas Constantine, born September 21, 1902, was the son of Lebrun Constantine, a plantation foreman who toured England as an all-rounder with the West Indian cricketers of 1900 – when he scored the first century for a West Indies team in England – and 1906. In 1923 they both played for Trinidad against British Guyana at Georgetown, one of the few instances of a father and son appearing together in a first-class match; both of them long cherished the occasion. In constant family practice, the father insisted on a high standard of fielding which was to prove the foundation of his son’s success.

The younger Constantine had played only three first-class matches before he was chosen for Austin’s 1923 team to England when he distinguished himself largely – indeed, almost solely – by his brilliance at cover point. On that visit he learnt much that he never forgot, by no means all of it about cricket: and he recognised the game as his only possible ladder to the kind of life he wanted.

As C.L.R. James has written he revolted against the revolting contrast between his first-class status as a cricketer and his third-class status as a man. That, almost equally with his enthusiasm for the game, prompted the five years of unremitting practice after which, in 1928, he came to England under Karl Nunes on West Indies’ first Test tour as an extremely lively fast bowler, hard-hitting batsman and outstanding fieldsman in any position. 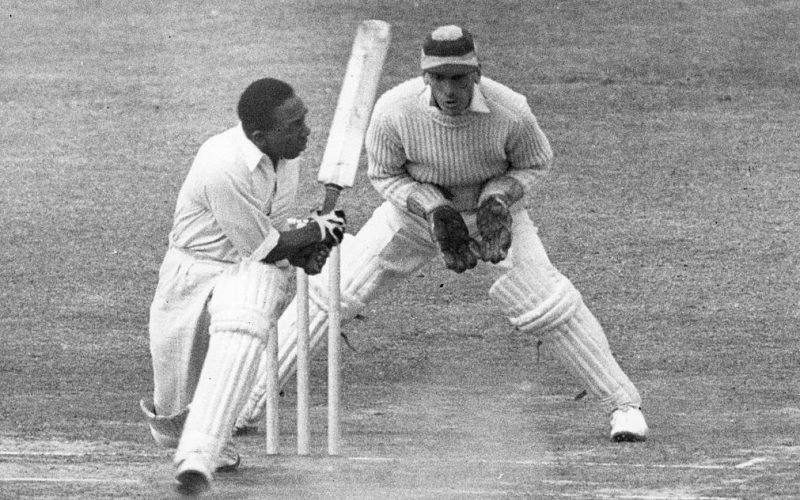 Muscular but lithe, stocky but long armed, he bowled with a bounding run, a high, smooth action and considerable pace. His batting, which depended considerably upon eye, was sometimes unorthodox to the point of spontaneous invention: but on his day it was virtually impossible to bowl at him. In the deep he picked up while going like a sprinter and threw with explosive accuracy; close to the wicket he was fearless and quick; wherever he was posted he amazed everyone by his speed and certainty in making catches which seemed far beyond reach. His movement was so joyously fluid and, at need, acrobatic that he might have been made of springs and rubber.

Although he did little in the Tests of that summer, he performed the double and in public esteem was quite the most successful member of the party. He provided splendid cricketing entertainment. Everyone who ever watched him will recall with delight his particular parlour trick – when a ball from him was played into the field he would turn and walk back towards his mark: the fieldsman would throw the ball at his back, Connie would keep walking and, without appearing to look, turn his arm and catch the ball between his shoulder blades; no one, so far as can be ascertained, ever saw him miss.

Crowds recognised and enjoyed him as a cricketer of adventure: but the reports alone of a single match established him in the imagination of thousands who had never seen him play. At Lord’s, in June, Middlesex made 352 for six and West Indies, for whom only Constantine, with 86, made more than 30, were 122 behind on the first innings. When Middlesex batted again, Constantine took seven for 57 – six for 11 in his second spell. West Indies wanting 259 to win were 121 for five when Constantine came in to score 103 out of 133 – with two sixes, twelve fours and a return drive that broke Jack Hearne’s finger so badly that he did not play again that season – in an hour, to win the match by three wickets. Lord’s erupted: and next day all cricketing England accepted a new major figure.

That performance confirmed the obvious, that Constantine was, as he knew he needed to be, the ideal league professional – surely the finest of all. He wanted a part-time living adequate for him to study law. England was the only place, and cricket his only means, of doing both. His batting could win a match in an hour; his bowling in a couple of overs, his catching in a few scattered moments. This was the kind of cricket nearest his heart: and he expressed himself through it. No man ever played cricket for a living – as Constantine needed to do more desperately than most professional cricketers – with greater gusto. 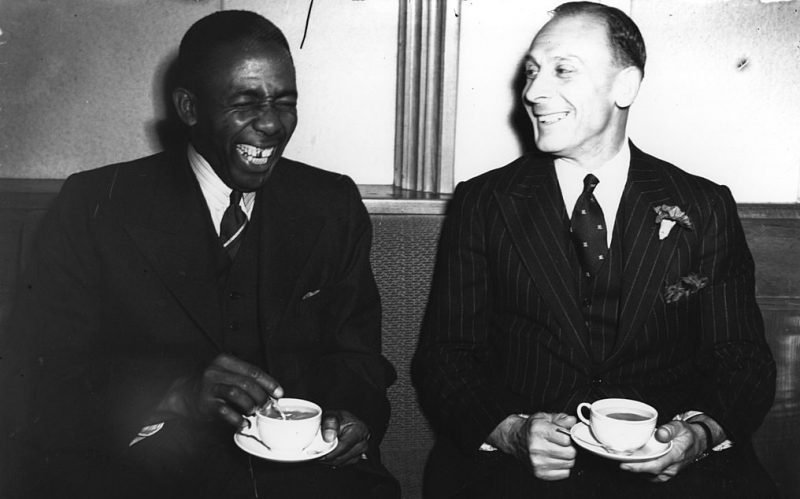 Learie Constantine with Sir Jack Hobbs at the Overseas House, London, circa 1939

Any club in the Lancashire leagues would have been grateful to sign him. Nelson did so with immense satisfaction on both sides. Constantine drew and delighted crowds – and won matches: Nelson won the Lancashire League eight times in his ten seasons there – an unparalleled sequence – and broke the ground attendance record at every ground in the competition. Less spectacularly, he coached and guided the younger players with true sympathy. Among the people of Nelson, many of whom had never seen a black man before, Connie and his wife, Norma, settled to a happy existence, which they remembered, with nostalgia to the end. In 1963, the Freedom of the Borough of Nelson was bestowed on the man who then was Sir Learie Constantine.

At Georgetown, in 1930, when West Indies beat England for the first time, George Headley made a major batting contribution; but it was Constantine who twice broke the English batting with four for 35 and five for 87, figures not approached by any other bowler in the match. At Port of Spain in 1934/35 he levelled the series – which West Indies eventually won by one match – when, after scoring 90 and 31, he took two for 41 and ended his second innings three for 11 (in 14.5 overs) with the masterstroke of having as great a resister as Maurice Leyland lbw with only one ball of the match remaining. In his last Test, at The Oval in 1939, when he was 37 years old, his five for 73 took West Indies to a first-innings lead.

As he grew older he grew more astute. As his pace dropped – though he was always likely to surprise with a faster ball or deal a yorker of high speed – he developed a superbly concealed slower ball; and at need he was an effective slow bowler with wrist or finger spin. He continued to play in charity matches well through his fifties when he could still make vivid strokes, bowl out good batsmen and take spectacular catches. 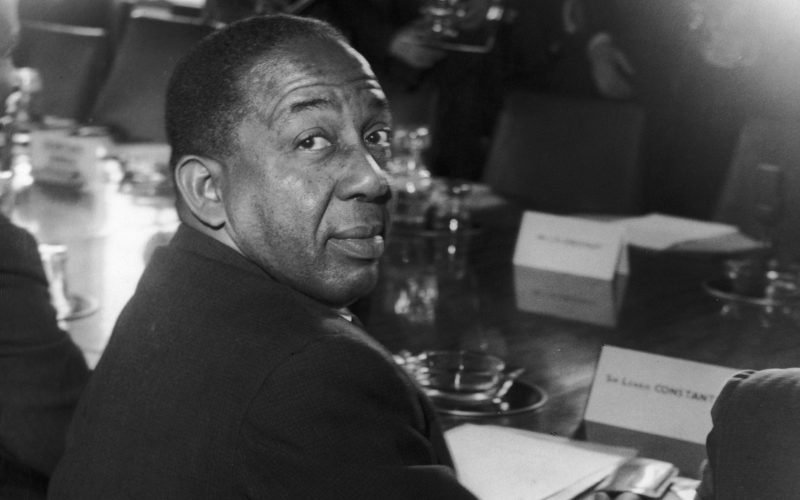 Sir Learie Constantine at the Trinidad and Tobago independence conference at Marlborough House, London, circa May 1962

In his younger days some thought him bouncy or unduly colour conscious; if that were so, Nelson warmed him. It would have been strange if so dynamic and effective a cricketer had not bubbled over with confidence. Certainly, though, he gave unhesitating and helpful counsel, and generous praise to his amateur colleagues in the Nelson team. Meanwhile he fought discrimination against his people with a dignity firm but free of acrimony.

Half Learie Constantine’s life was spent in England and, although his doctors had long before advised him that a lung condition endangered his life if he did not return to the warmer climate of the West Indies, he died in London. He remained in England during the Second World War as a Ministry of Labour welfare officer with West Indian workers. In 1944 he fought one of the historic cases against colour prejudice when he won damages from the Imperial Hotel in London for failing to receive and lodge him. He was deeply moved – and never forgot it – when the other players – all white-skinned – elected him captain of the Dominions team that beat England in the magnificent celebratory, end-of-war match at Lord’s in 1946. He rose to the occasion in a fine forcing partnership with Keith Miller and his shrewd captaincy decided a narrow issue with only minutes to spare.

By then, however, his serious cricketing days were drawing to an end. He did occasional writing and broadcasting. Among his books are Cricket in the Sun, Cricket and I, How to Play Cricket, Cricketers’ Carnival, The Changing Face of Cricket (with Denzil Batchelor), and Colour Bar. Years of dogged study were rewarded when he was called to the Bar by the Middle Temple in 1954. Returning to Trinidad he was elected an MP in his country’s first democratic parliament; became Minister of Works in the government and subsequently High Commissioner for Trinidad and Tobago in London from 1962 until 1964. He was awarded the MBE in 1945; knighted in 1962; made an honorary Master of the Bench in 1963; and created a life peer in 1969. He served various periods as a governor of the BBC, a Rector of St Andrews, a member of the Race Relations Board and the Sports Council.

A devout Roman Catholic, of easy humour and essential patience, he lived a contented domestic life with his wife and his daughter, who is now a schoolteacher in Trinidad. His outlook was that of a compassionate radical and he maintained his high moral standards unswervingly.

To the end of his days he recalled with joy the great moments of his cricket and the friends he had made. His wife survived him by barely two months: and Trinidad posthumously awarded him the Trinity Cross, the country’s highest honour.