No England player of the 21st century has generated as many column inches and online debate as Kevin Pietersen. When he left the international game in 2014, Wisden looked back on his remarkable career.

They were three shots – three shots from the bat of Kevin Pietersen – that changed English cricket history. The first Test at Lord’s in July 2005 was a hugely hyped event that pitted the all-conquering but ageing Australians, holders of the Ashes since 1989, against an emerging English side on a roll. It was the hardy old males against the ambitious young bucks – and it was going to be a fight to the death.

Or was it? England’s highly charged assault on the Australian batsmen – gunning them down for 190 – had been instantly nullified by Glenn McGrath. England’s vessel was listing badly. Pietersen, making his Test debut, survived that onslaught, circumspectly at first, and remained to play an innings of utmost importance, an innings that contained those three shots.

We had already seen what he could do. A month earlier, during a one-day international at Bristol, he had flayed Australia, stealing an unlikely win with a daring 91. But this was Test cricket – serious, nation-defining stuff. McGrath had left England reeling, and now Brett Lee and Shane Warne toyed with the wounded animal. At 101-8, the innings was sliding into oblivion.

His batting was seldom safe, rarely sensible, sometimes unsuccessful. But it was always memorable

The circumstances hardly encouraged a counter-attack: McGrath had found his length, waiting for the pitch to do its work and the batsmen to succumb. Pietersen’s response was to bludgeon the first ball of an over back past the bowler, head high, for four. McGrath wasn’t used to that. But there was better to come.

Next ball, Pietersen took a step or two towards his opponent. McGrath banged it in a touch shorter. Pietersen opened his shoulders and – as he might put it: boom! – the ball, still rising, was met with a colossal swing of the bat. It soared skywards, flying 80 yards, higher than the great Pavilion, clearing the rails and landing in the eighth row of the members’ seating area. It may even have woken up a few slumberers, who could then applaud Pietersen’s half-century as he thrashed the next ball through the covers.

Now, to complete the trilogy, he turned his attention to Warne. Pietersen had been defending against him cautiously, picking up the odd single. Warne teased away, on and just outside off stump, a perfect length, with a hint of turn and subtle variations of pace and trajectory. OK, said Pietersen. He planted his big front leg down the pitch and, using his massive reach, slog-swept a good length ball off the stumps. The contact was clean, and the ball flew flat into the hospitality boxes in the Grand Stand. Not many did that on their Test debut against Warne. But Pietersen did – and, though he was out next ball attempting a repeat, his audacity had a lasting impact. 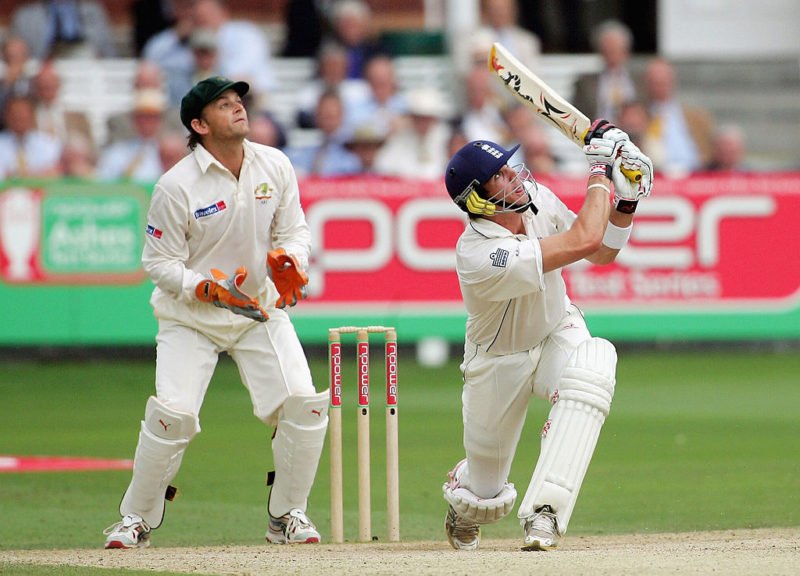 Everyone remembers the 2005 Ashes for Andrew Flintoff’s heroics, but it was Pietersen’s bravado and fearlessness that showed England the way. Emboldened by his two half-centuries at Lord’s, they came out at Edgbaston 11 days later and scored 407 in 79.2 overs, with Pietersen hitting 71, in union with Flintoff. Then came that daring 158 at The Oval. A star had been born.

At his best, Kevin Pietersen was the Picasso of batting: bold, outrageous, avant-garde. His innings were a mixture of the brazen and bizarre. Some were almost incomprehensible, defying logic and geometry, born of experimentation, suffused with magic. He had, as his grateful captain Michael Vaughan suggested after that Oval knock, a little bit of genius in him.

Pietersen did not play each delivery on its merit, as per the manual. There were no rules. His shots were not governed by the line or length of the ball, but by where he decided to hit it. He was not prepared to wait for the ball to arrive: he went in search of it, taking it early, on the up, hitting it through or over the fielders.

Related Story: Was Kevin Pietersen’s Test place on the line at The Oval in 2005?

He was a batsman of the modern world. He was impatient. He wanted it, now. He imposed himself. There was no front-foot/back-foot divide: at 6ft 4in he could step forward to everything, reaching far in front, rising to his full height if the bounce surprised him. He struck the ball as he desired. If that was by standing on one leg – flamingo-style – or temporarily turning himself into a left-hander, so be it.

Two of his favourite shots were the outrageous reverse slog-sweep off Muttiah Muralitharan in a Test at Edgbaston in 2006, and a pair of switch-hits – hands swapping places on the bat – off New Zealand’s Scott Styris in a one-dayer at Chester-le-Street in 2008. All three went for six, and MCC felt obliged to discuss the switch-hit’s legality; as Pietersen himself wrote in one of the few compelling passages of an autobiography otherwise devoid of cricket, provoking that discussion was one of his proudest achievements. Rightly, MCC ruled in its favour. 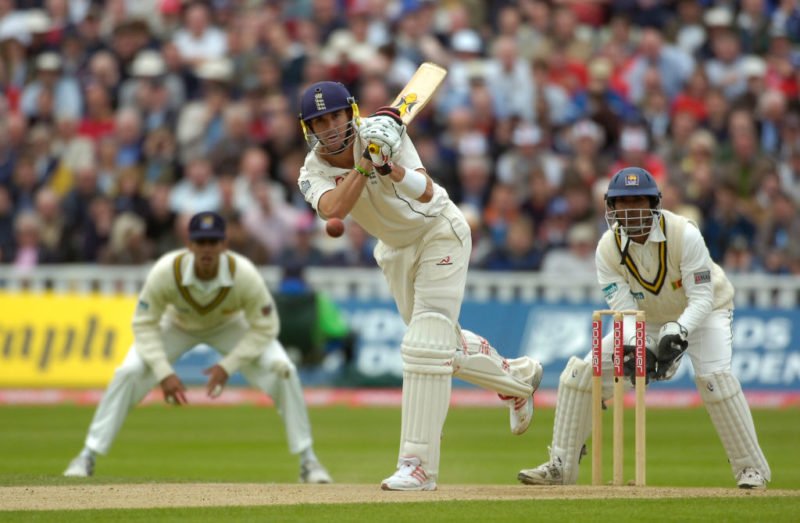 Kevin Pietersen at Edgbaston in 2006, scene of his reverse slog-sweep

And yet his method was based on pragmatism. Pietersen began his cricketing life with his brothers in his backyard in Pietermaritzburg. It was a narrow space, requiring dexterity. The one-hand-one-bounce rule meant you could be caught off the wall or ground if you didn’t place your shots carefully. It was here he learned to use his wrists to manipulate the ball into gaps. His brilliant range of leg-side strokes would bring him more international runs than any England batsman.

Like Viv Richards, he often looked as if he hit across the line of the ball. But, if you analyse his and Richards’s shots, Pietersen wasn’t hitting across the ball at all: his bat came down resolutely straight. It was simply a last-minute turn of the wrists that deposited the ball into those leg-side spaces. There was little risk. It was the perfection of his timing, and the scale of his ambition, that made those strokes so breathtaking and destructive. And, of course, they didn’t come about without hours of preparation.

He was a batsman of the modern world. He was impatient. He wanted it, now

Pietersen has an unusual body: tall and strong, but also lithe and athletic; light on his feet, almost catlike. It allowed him to get into contorted positions to play unique shots, such as the waltz towards the bowler and across the stumps to power a shortish ball from a seamer through midwicket, and mess up his length. Or, against Warne, he would put his foot on the line of middle stump, get low to the ground, angle his body slightly towards the off side, and smear a straight ball on the up through extra cover. He was taking the ball early, at the top of its bounce, gauging its spin, and hitting it along the ground, while using his hands, far out in front of his body, to control the direction of the stroke. That is very difficult.

He liked living close to the edge, where others were waiting to give him a push, and the adrenalin coursed most freely: averaging over 150 in a losing cause in a one-day series in his native South Africa in 2004/05, when many of the locals literally turned their backs on a man they considered a traitor, was classic Pietersen.

And it was no coincidence that his three greatest Test innings all came in adversity. The 158 in 2005 at The Oval came on the final afternoon, after England – needing to bat most of the day for the draw that would secure the Ashes – had slipped to 67-3, and later 126-5. At first he was uncomfortable against Brett Lee’s bouncers. And so, after surviving anxiously until lunch, he flogged rather than flinched, rode his luck, and hauled England to safety. At Headingley against South Africa in 2012 he was angry and emotional at contract disputes, perceived injustices, and baiting from his supposed friends in the opposition. He obliterated the world’s best pace attack for 149, spanking Morne Morkel’s bouncers over deep midwicket and almost decapitating Dale Steyn with a straight-drive. Now that’s what you’d call bullying. 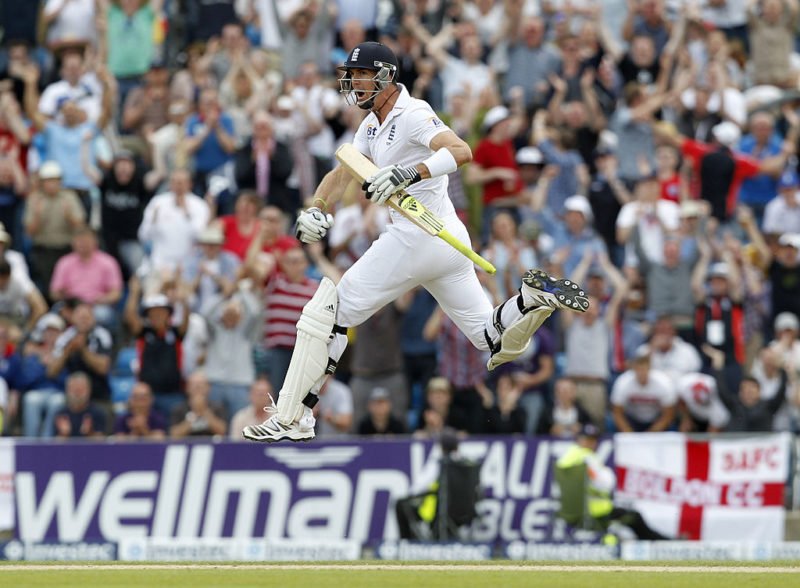 Pietersen celebrates his cathartic century against South Africa in 2012

To cap them both was an extraordinary 186 a few months later on a turning wicket in Mumbai. This was the result of the torment he had suffered at the hands, not of rampaging fast bowlers or mystery spinners, but of plain old slow left-armers. M. S. Dhoni had been turning to Yuvraj Singh – a “pie-chucker”, Pietersen had once called him. He denied there was a problem, but – repeatedly confronted by the genre – his frenetic behaviour at the crease suggested otherwise.

The culmination of this twitchiness had been two failures – both bowled getting himself in an awful tangle – at the hands of Pragyan Ojha in the first Test at Ahmedabad. A fixation had become a phobia, and England were 1-0 down heading to Mumbai. Now, after a conversation with Warne during which he finally admitted his strange fallibility, Pietersen changed his technique. Against Ojha he decided to stay back, rather than lunge forward in search of the ball, and looked initially to hit to off, rather than work against the spin to his preferred leg side.

After a few early fours against the off-breaks of the fading Harbhajan Singh, he was a man transformed. The assault he launched on Ravichandran Ashwin (52 off 46 balls) and Ojha (74 off 105) was the most withering the likes of Sunil Gavaskar and Rahul Dravid said they had witnessed. Harbhajan (37 off 43) was hammered through the off side, Ashwin launched over leg, and Ojha slog-swept for six. The crowning glory was a semi-advance at Ojha to send the ball, with a dramatic flourish, screaming over extra cover and into the crowd. He described it as “one of the top three shots of my career”. It was a spectacular performance and, when he had finished, India were broken. England won their first series there for 28 years.

It was once said of Frank Woolley that “his runs are thin-spun as he walks the tightrope between success and failure”. The same applies to Pietersen. He was capable of destroying any attack, yet of getting out in the most exasperating manner. His batting was seldom safe, rarely sensible, sometimes unsuccessful. But it was always memorable. The strange thing – if his book is anything to go by – is that he doesn’t seem inclined to remember much of it. Perhaps one day he will.