Ken Barrington was England’s most reliable batsman in the 1960s with a formidable record against the world’s best attacks. After his breakthrough year in 1959, he was named a Wisden Cricketer of the Year.

Down the years many great batsmen have been developed at Kennington Oval, the home of Surrey County Cricket Club, and last summer it seemed that another had emerged in Ken Barrington. In all matches, he scored 2,499 runs at an average of 54.32 an innings and he certainly fulfilled the promise he had shown in his earlier days.

Born at Reading on November 24, 1930, Kenneth Frank Barrington pays tribute to his father, who spent 28 years in the Forces and served in the two Great Wars. Ken was little more than a toddler when his father taught him to hold a cricket bat and throw a ball. He remembers playing cricket when he was eight or nine at Katesgrove School, Reading, which he left at the age of 14.

At first he worked in a local garage, but soon he forsook the motor industry to become assistant groundsman to the Reading Cricket Club at Earley and that move has kept him in the game ever since. In those days he considered himself a right-arm slow bowler with an aptitude to turn the ball from leg. Reading put him in their first team and he was satisfied to bat at eight or nine.

The turning point in his career came in 1947 when he was 16 and playing for Reading Wednesday at Guildford. Someone was impressed by his leg-spinners and without his knowledge contacted Surrey who invited him to play for the Colts the following week. He took five wickets in his first game and continued to appear for the Colts for the remainder of the season.

The next year, 1948, found him a professional on the Surrey staff, but he played in only one second eleven match and was still reckoned a leg-spinner when he joined the Army in 1949. The matting pitches in Germany were ideal for his type of bowling and he took heaps of wickets. 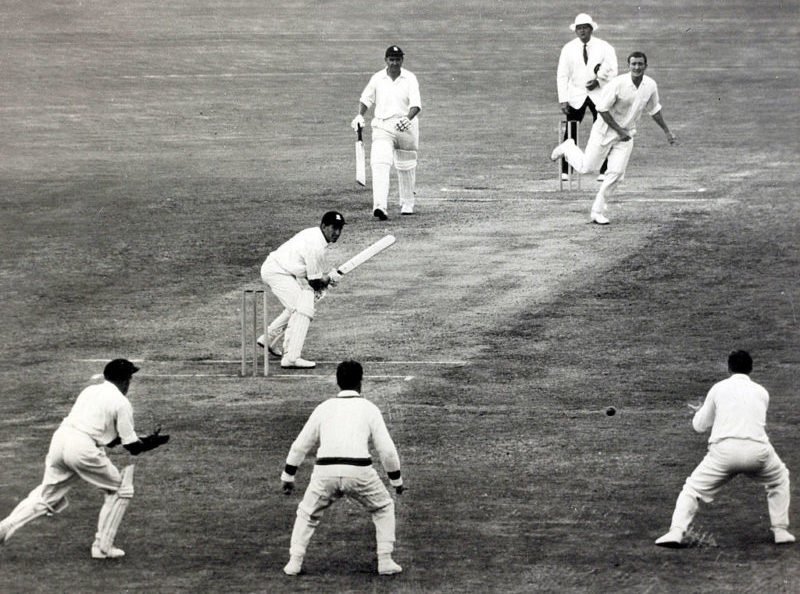 Barrington batting against Australia in Sydney, 1963. The talismanic batsman was prolific when Down Under.

Returning to The Oval in 1951 it became obvious to all those who saw him at the nets that here was a stylish ready-made batsman. Under the skilful coaching of Andrew Sandham he developed his powers as a run-getter and more or less forsook bowling. That season he made 354 runs, highest score 73, in the Minor Counties competition, and the following summer saw a big advance for, hitting three hundreds, he made 1,097 runs, average 57.73.

Barrington realised his ambition next season, 1953, when he made his debut for the Surrey XI against MCC at Lord’s. He also played against the Australians at The Oval and appeared in seven county matches, but it was a modest beginning, his aggregate for the summer being 237 runs, average 18.23.

Real progress came in 1954 when he averaged 40.23 in 25 innings and hit three hundreds while scoring 854 runs, his maiden century being 108 not out against Gloucestershire at The Oval. He and Laker, who also hit his maiden Championship century in that game, put on 198, their stand falling only six short of Surrey’s best for the eighth wicket.

The year of 1955 was a notable one for Barrington. He scored more runs than previously, 1,580, gained his county cap and he played twice for England against South Africa. Moreover, the Cricket Writers’ Club voted him the Most Promising Young Player of the Year. He was also chosen for the MCC A team tour of Pakistan, but his elevation to international status was premature and four years elapsed before he was honoured again. 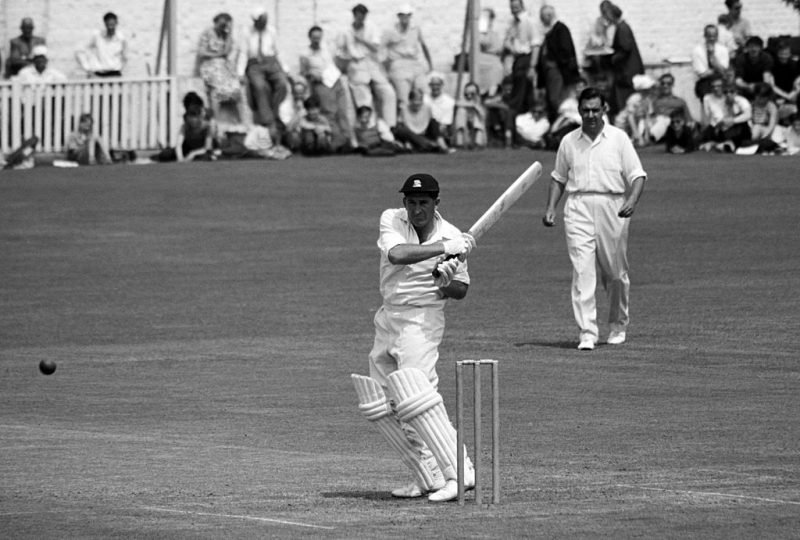 Ken Barrington batting for Surrey during a match against Kent, circa 1965

For a time Barrington remained somewhat static as a batsman. Indeed, after all his promise he had two comparatively lean years in 1956 and 1958, but in 1957 his runs numbered 1,642 and he hit six centuries, yet one felt that the best of him had not been seen. It should be borne in mind that during these formative years for Barrington, Surrey were winning the Championship regularly on pitches that encouraged the bowlers. Under Surridge and May, the batsmen were expected to make their runs in reasonable time and many people were of the opinion that Barrington did not show the enterprise that his ability warranted.

Barrington, on the other hand, considers that his first five or six years in the Surrey team provided the sound education that he needed to perfect his defence, as well as the experience required to get to the top of the cricketing world. He admits he also learned much from being able to watch great players, particularly Peter May.

Always a punishing type of batsman, Barrington came out in his true colours in the sunny days of 1959. Beginning with 97 and 25 against Cambridge University at Fenner’s, he trounced the Warwickshire bowling in Surrey’s first Championship match at Edgbaston by making 186 and 118 not out. Selected for all five Tests against India he showed consistency with these scores: 56 at Trent Bridge, 80 at Lord’s, 80 at Headingley, 87 and 46 at Old Trafford and his only failure was in the final Test at The Oval where he had to be satisfied with 8. He was an obvious choice for the MCC tour of West Indies.

Related Story: Wisden’s under-24 team of the 2022 County Championship

Built on solid lines with a mop of dark hair, Barrington has always possessed a powerful square cut and brilliant cover drives. Nowadays he is equipped with a very wide range of strokes and when he is master of the situation he provides plenty of entertainment for the onlookers. The straight uplift of his bat is a model for anyone to copy. From his earliest days he was a fine fielder with a deadly return to the wicket. In recent years Surrey have employed him close to the bat and when Stuart Surridge retired he went to first slip in 1957 as if trained for the position and held 64 catches in his first season there.

While Surrey have not needed Barrington as a slow bowler during the heyday of Laker and Lock, M.C. Cowdrey, on the occasion of his first Test as captain of England at Old Trafford last summer, gave him the opportunity to show that he can still pitch a steady length besides giving the ball a good tweak, and he took five Indian wickets in the two innings.