Keith Boyce was an explosive all-rounder for Essex and West Indies in the 1970s. His Wisden obituary remembered a hugely popular figure.

Keith Boyce played in 21 Test matches for West Indies in the early 1970s but was better-known for being one of the most exciting and successful imports into county cricket. He spent 12 years with Essex from 1966 to 1977, and it was appropriate – and maybe no coincidence – that these were years when Essex won nothing but had an enormous amount of fun.

Boyce started in Barbados as a leg-spinner, but had to open the bowling in a match against the International Cavaliers in 1964/65. Trevor Bailey was so impressed that he signed him for Essex before he had even watched him bat. Boyce had to spend two years qualifying, but when he made his English first-class debut (after just the one appearance for Barbados), he took nine for 61 against Cambridge. When he was allowed to play competitive matches, Boyce became an instant star.

He was an uncomplicated, aggressive fast bowler, sometimes slowed down by no-ball problems, and – though Bailey did not know it at first – an equally aggressive if not always disciplined batsman, whose tours de force were all the more memorable for their irregularity.

He was an obvious power in one-day cricket and was the first player to reach the 1,000 runs/100 wickets double in the Sunday League. But he occasionally translated his methods into Championship cricket: he scored a hundred in 58 minutes against Leicestershire in their Championship year of 1975, with no contrivance involved whatever. He then took 12 for 73 in the match. Perhaps only Essex of the 1970s could have failed to win such a contest. Boyce was a spectacular fielder, who could throw accurately on the turn, and an all-round enthusiast.

He seemed to fit rather less well into West Indian teams than he did at Essex, but played a vital role in the recapture of the Wisden Trophy in 1973, with match figures of 11 for 147 at the Oval and eight for 99 at Lord’s. Boyce became one of Wisden’s Five Cricketers in 1974, and had another triumph in the first World Cup final a year later, when he scored a rapid late-order 34 and took four Australian wickets, alongside one for Clive Lloyd and five run-outs. 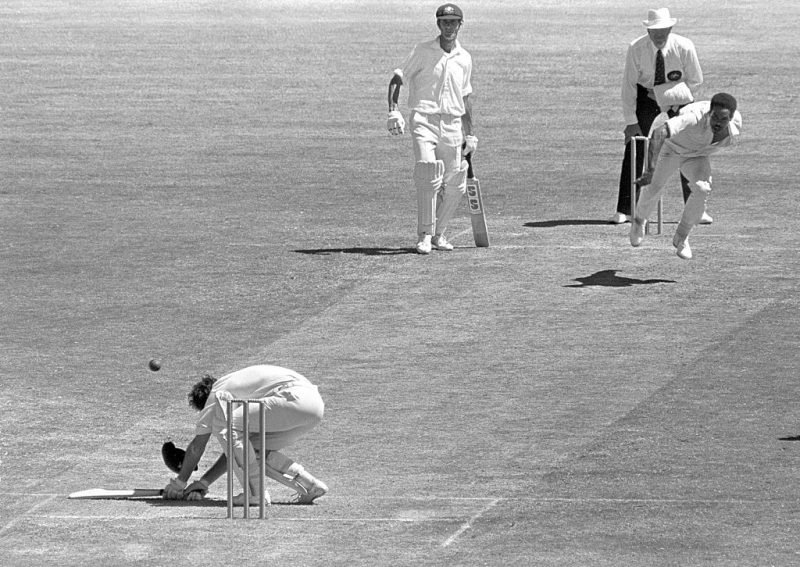 Debutant Graham Yallop loses his cap while ducking a bouncer from Keith Boyce at the SCG, circa 1976

However, he faded out of Test cricket after being part of the team slaughtered in Australia in 1975/76. In his penultimate Test, at Adelaide, he was left stranded on 95 and was destined never to make a Test century.

By now his heavy workload was beginning to have its effect on his knees and he retired, after a tearful public farewell at Chelmsford in 1977. Boyce was known as a prodigious drinker and went through some difficult years after his return to Barbados: his marriage broke up and his house was blown away in a hurricane.

However, he had settled down and had a job running the Barbados Cricket Association lottery when he collapsed. The archetypal Boyce story came when he was supposed to be blocking, and got out attempting a huge hit. He said blithely that he thought it would waste more time if the fielders had been forced to go and look for the ball.