Kapil Dev was India’s greatest all-rounder and part of a quintet that dominated the game in the 1980s. In the 1995 Wisden Cricketers’ Almanack, Mike Selvey marked his retirement.

Perhaps the hardest thing to appreciate about Kapil Dev finally exchanging his cricket box for the TV commentary box is the fact that he was only 35 years old when he did so. Well, give or take a bit maybe: he might be a touch more geriatric than that; it is often suggested that at the time he was born, whenever that was, it was not necessarily the custom in northern India to register the year of birth. But that misses the point: however old he was, he seemed to have been around for a lot longer, prancing in to shore up the Indian attack and joyfully retrieving an innings with uninhibited squeaky-clean hitting. An Indian team without him will never seem quite the same. 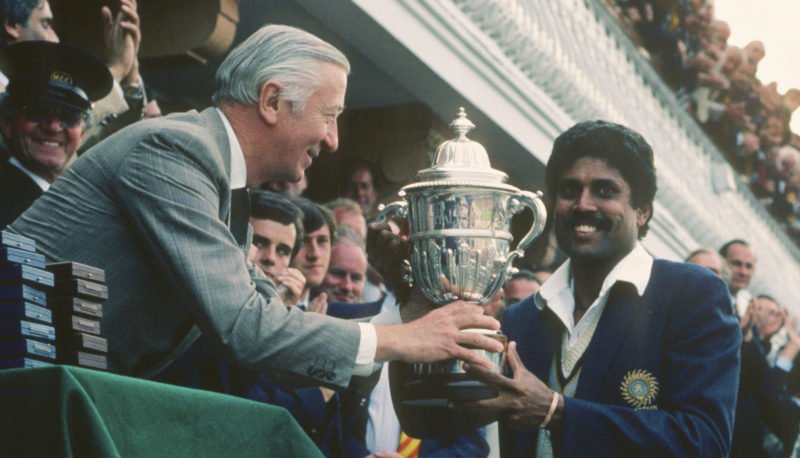 India’s finest; one of the world’s best

With his departure comes the end of an era that has been blessed with a quartet of all-rounders unmatched in the history of the game, beginning in the early 1970s with Richard – later Sir Richard – Hadlee and Imran Khan, progressing to the laddo Botham, and finally, with his Test debut in October 1978, to the man who became known to his countrymen as the Haryana Hurricane.

What deeds from these four! Between them, they took 1,610 Test wickets and scored 17,379 runs. With the possible exception of Hadlee, each was equipped technically to play international cricket as a specialist in either role. But what a contrast: Hadlee the Inquisitor, with a surgeon’s touch and an accountant’s brain; Imran, the haughty, proud Pathan; Botham, the bull elephant who lived cricket and life on the edge and Kapil, flamboyant and cavalier, charming but deadly. Today, Wasim Akram alone is left to carry a torch for the standards set by these four.

His bowling may have lacked Hadlee’s relentlessly searching examination, or Imran’s leaping, muscular pace, or Botham’s bludgeon and will-power, but it was deceptively effective

Kapil has perhaps been regarded as the most lightweight of the group. But with 434 wickets and 5,248 runs, he is the one who proved, in the end, to be the most prolific with both ball and bat. That has much to do with the fact that he played 131 Tests compared with Hadlee’s 86, Imran’s 88 and Botham’s 102. And, as the last to survive, he was in a position to make sure that he finished top of the heap. But he laid out his credentials as soon as he entered Test cricket. His teeth may have flashed a disarming smile but this was a formidable competitor worthy of his fierce Punjabi ancestors.

Kapil has always regarded bowling as his primary role. And on February 8, 1994 he took the wicket of the Sri Lankan, Hashan Tillakaratne, to go past Hadlee’s world-record haul of 431 wickets. For the latter part of his career, it had been a hard slog, chipping away bit by bit at the target, like someone climbing a rock face and gradually running out of handholds with the top of the pitch in sight. Towards the end the years caught up and he was reduced to little more than medium-pace, with away-swing going invitingly early. 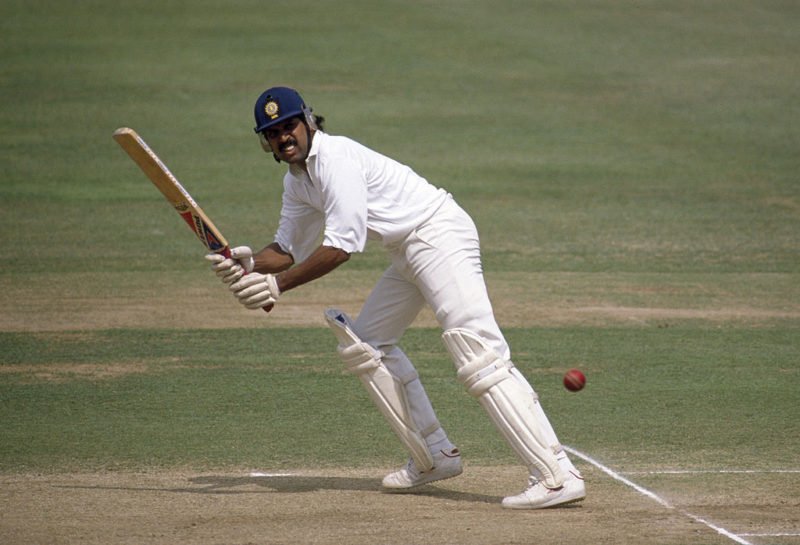 Kapil batting in his last Lord’s Test in 1990

But it hadn’t always been so. In his prime, he was much like the young, lithe Botham, with pace enough – goaded by the irrational Indian belief that their bowlers were born only to beguile – to render footwork leaden. This was accompanied by snaking late out-swing, helped by a contortionist’s action so far round that it presented his left shoulder-blade to the batsman, and a wicked break-back that struck with the speed of a cobra. Superficially, his bowling may have lacked Hadlee’s relentlessly searching examination, or Imran’s leaping, muscular pace, or Botham’s bludgeon and will-power, but it was deceptively effective for all that.

Yet in the fullness of time, he may be remembered more for his carefree, hawk-eyed batting. He was helped by the fact that he was an all-rounder and so had the freedom to play as he did: one discipline fuelled the other. The rate at which he was capable of scoring was phenomenal. At Lord’s in 1982, he brought the England bowling to its knees, hitting 13 fours and three sixes, an innings of 89 that came from just 55 balls, well on course then for what would have been the fastest Test century in history. And in his last Lord’s Test, in 1990 – Gooch’s match – he scored the 24 India required to save the follow-on by hitting Eddie Hemmings for four successive straight sixes while the last man, Hirwani, blinked myopically at the other end and got out next ball. 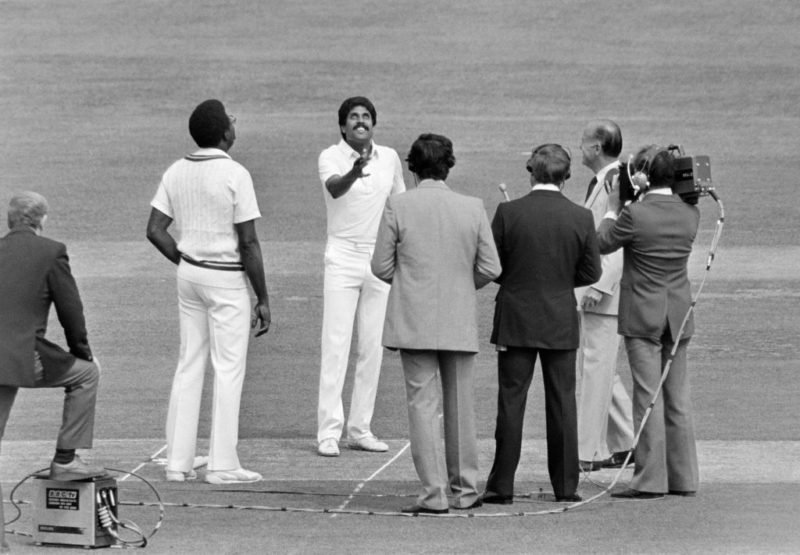 Tossing up before the World Cup final in 1983

And yet perhaps his finest moment came not in a Test but in a limited-overs international against Zimbabwe, not even a Test-playing nation then, at, improbably enough, Tunbridge Wells. In 1983, it was Kapil’s lot to lead India in the World Cup, and he found himself at the crease on a damp pitch, with the scoreboard reading 17-5. He was to play what he has described as the innings of a lifetime, scoring an unbeaten 175 as India reached 266-8 and went on to win the game.

Eventually, they progressed to the final at Lord’s where, against all the odds, they beat West Indies, then arguably the most potent cricket force ever to set foot on the ground. Kapil and India showed they could be taken, and an illusion was shattered: West Indies have not won the World Cup since.