Jonty Rhodes is remembered for his electrifying fielding, but he was also a fine Test batsman. In 1999, he was named a Wisden Cricketer of the Year.

There were many sceptics when 22-year-old Jonty Rhodes was selected for South Africa’s 1992 World Cup squad. He could field, but could he bat? At best, he was regarded as someone who might be useful in a one-day team. Rhodes, however, was already thinking ahead and said his ambition was to be a good Test player.

Six years later, on South Africa’s first full tour of England in nearly 40 years, cricket followers in both countries thrilled to the best of him. By now, he was accepted as the best outfielder in cricket – if anything, better than he was as a youngster – and indispensable in one-day cricket. It was Rhodes the batsman who was a revelation. He scored 367 runs in five Tests against England at an average of 52.42, despite being unlucky with three umpiring decisions.

Three of his innings were memorable. He made his team’s top score, 95, at Edgbaston, and took South Africa to safety with positive strokeplay. He played even better at Lord’s, where he hit 117, his second Test century, and with Hansie Cronje steered South Africa from the peril of 46 for four to a platform from which they gained a crushing win. In the deciding Test at Headingley, he made a glorious 85, which helped South Africa from 27 for five to the brink of an improbable – but ultimately unattainable – triumph.

Back in May, Rhodes had confirmed his status as a one-day player when he took the Man of the Series award in the Texaco Trophy. He rounded off his summer in the Triangular Tournament with a miraculous leaping catch at short cover to dismiss Robert Croft off a full-blooded drive. At least, it would have been miraculous for anyone else.

Jonathan Neil Rhodes was born in Pietermaritzburg on July 27, 1969. Sport was always a part of his life. His mother Tish played tennis. His father Digby, a former athlete and rugby scrum half, was deputy headmaster of Merchiston primary school, where young Rhodes played in the First Eleven. Rhodes senior was a firm believer in the value of fielding. “If you didn’t come off with grass stains on your flannels he thought you hadn’t done your job,” says Jonty. 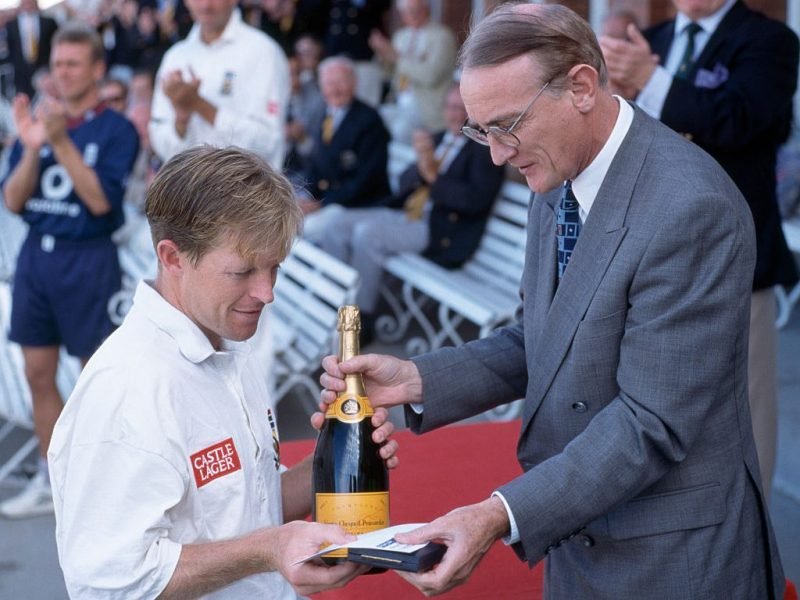 He made a century for Natal in the under-13 provincial cricket week, but soccer was his first love: he was the leading scorer at a junior provincial tournament. “Kevin Keegan and Pele were my heroes and I dreamed of playing in England.” At Maritzburg College, he switched his goal-scoring skills to hockey, was selected for the national hockey squad before the end of cricketing isolation and, as recently as 1996, was invited to try out for the Atlanta Olympic Games but suffered an untimely hamstring injury.

Although his rise in cricket was not as rapid or spectacular, in 1987 he became vice-captain to Cronje in the South African Schools XI and made a century on his first-class debut, for Natal against Western Province in 1988-89. But it was his fielding and ability to score quickly, rather than weight of runs, that earned him selection for the World Cup, and there was some surprise when he was preferred to Cronje for South Africa’s first post-isolation home Test, against India at Kingsmead in 1992-93. Rhodes, however, maintained an average above 40 for his first 15 Tests, making a match-saving century against Sri Lanka in Moratuwa in 1993/94.

Gradually, though, his batting performances dwindled. “I didn’t have the best technique in the world,” he admits. Test bowlers refused to allow him his favourite cut and pull shots. When Bob Woolmer took over as national team coach in 1994/95, he worked with Rhodes on playing straighter. Natal coach Graham Ford oversaw a slight change in grip, to reduce the amount of bottom hand, while Woolmer’s simple advice to focus on the ball was invaluable. But it was only in England that he re-established himself as a first-choice Test player.

He has runs on his side, however, whether he scores any or not. Steve Waugh, for instance, says that there is a lessening of intensity whenever Rhodes is not playing for South Africa. He is often described as the best fielder in the world, but Rhodes shrugs this off: “There are so many different aspects of fielding. I don’t believe you can say any one person is the best. I like to think I am one of the best stoppers. My strengths are stopping runs, holding catches and putting pressure on opponents.”

As he nears his 30th birthday, he admits there is a physical toll. “I enjoy diving, but when I use both hands I land on my chest and it causes whiplash to my neck. I visit a chiropractor once a month. There will come a time when the body says ‘no more’. Before regaining his Test place, he thought the 1999 World Cup might be his swansong, but now he will take each season as it comes. Enjoyment is paramount. “It is a game,” he says. “I play cricket because I love it.”

Religion, though, is crucial in his life. He says he will always walk if he knows he is out, and recall a batsman if he takes a catch on the bounce. “The Lord doesn’t like cheating,” he says. Such a policy makes bad decisions doubly cruel, but Rhodes says: “Averages are not everything, it’s also about that old thing of how you played the game.” In 1998, Jonty Rhodes played it exceedingly well.