Johnny Wardle was part of a great line of Yorkshire left-arm spinners that included Wilfred Rhodes and Headley Verity. After a successful Ashes series in 1953, he was chosen as a Wisden Cricketer of the Year.

To laugh at the hard knocks of life is a characteristic of the North Country miner, and John Henry Wardle, the Yorkshire left-arm slow bowler, born at Ardsley, January 8, 1923, is typical of a calling which would have claimed him had it not been for a great natural aptitude at cricket. His father was a miner.

Humour on the cricket field, especially in a Test Match between England and Australia, is rare. The seriousness of the occasion precludes funniness unless the antics of a No.11 batsman trying to put his bat to a top-class bowler are considered funny. 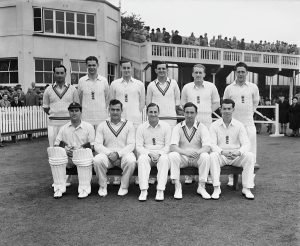 Yet who could do anything except chuckle – at Lord’s of all places – when Johnnie Wardle was hit on the thigh by a Lindwall express and he immediately began to rub his elbow? Or, when the attempted cover-drive soared over the slips, this same player took an imaginary bit of chalk and rubbed his bat, and, on another occasion for the same type of miscued stroke, he seriously applauded himself for the four runs which resulted. Most humour comes at the predicament or the expense of a third party. The best humour comes from the man making fun of himself.

As a youngster at the Brampton-Ellis Senior School, Wardle revealed that first boy at the school who managed to hit a six on their spacious playing fields. When hitting, kicking, throwing and bowling, it was apparent that he had a highly developed ball sense.

Mad keen on cricket and all ball games, young Wardle moved to the Wath-on-Dearne Grammar School when he was 11. The seniors at school failed to realise the urge and latent possibilities in the boy who frequented the nets whenever they were at practice. In that hard, practical wayof senior boys, they kicked him out unceremoniously. 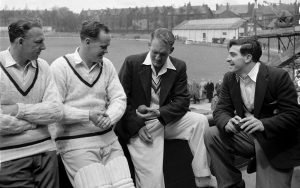 At 14 he was still considered one of the juniors in the school at Wath, but in the neighbouring village of Brampton, where they had a club playing in the Southern Yorkshire league, there was encouragement and frequent inclusions in the side. By dashing home from school and hurrying to the cricket ground he managed to be on hand whenever the side playing in the Mexborough league were a player short. His lively enthusiasm brought him many games with the men.

It was in one of these games that boy John Wardle had his sweetest moment. The school captain came to play for an opposing team and Wardle bowled him for a duck.

His inclusion in the school team came automatically, and at the end of his first season he had scored more runs, taken more wickets and was credited with more catches than any other player in the side. He won a Herbert Sutcliffe bat with a bowling performance of eight for four.

At the school prize distribution, there were five school cricket caps on the headmasters desk for presentation. Says Johnnie: “I expected my name to be called. After four had been given away I was out of my seat and moving along the row to get the fifth, but it wasn’t for me.” With that capacity to laugh at the knocks, Wardle chuckles, “I did feel a fool, and I never got a school cap.”

He left school at 15 to become an apprentice fitter at the Hickelton Main Collery, and it is worthy of note in his next five seasons – playing for Hickleton, Brampton and Denaby – he won the League junior bowling prize four times. In the 1940 season he made his first century, 104 not out against Mexborough, and a few weeks later he took all ten wickets for 36 runs against Rockingham.

It is worth reporting too, that when was only 17, Major Frank Buckley gave him trials as an inside-forward with the famous Wolverhampton Wanderers football club and desired to sign him. But Wardle decided otherwise because so many of his local cricket clubs were wanting him to turn professional, what with his job and being paid for cricket, he was better off staying in Yorkshire.

In 1943-44, when playing for Denaby in the Yorkshire Council League, Wardle established a record by taking 113 wickets in the season. He was known throughout Yorkshire as one of the most promising left-handers in the country and when, after the war, Yorkshire played their first friendly fixture with Lancashire in 1945, Wardle was included in the team for Old Trafford. He did little except note the virtues of length and direction as demonstrated by the veteran left-handed Arthur Booth, who took eight wickets for 54 runs in the second innings.

"I believe that a player should be sent on tour to get added experience. He needs to have plenty before he goes"

Booth was chosen as the bowler best suited to fill the gap in the Yorkshire team caused by the loss of Headley Verity, but two swashbuckling innings of 64 and 48 for Yorkshire against Derbyshire at Sheffield a fortnight later served to keep Wardle’s name to the fore. He played regularly for the Yorkshire Second XI in 1946, and when Booth fell ill, in the first match of the 1947 season, Wardle was the natural replacement. In all matches he took 86 wickets for 25.64 apiece and averaged 18.18 with the bat. Among his performances were six wickets for 28 runs against Surrey at Bradford and seven for 66 in W.E. Bowes’ benefit against Middlesex at Leeds. He was chosen to go to the West Indies with G.O. Allen’s side.

One of the disappointments of the tour Wardle says: “I was far too inexperienced. I believe that a player should be sent on tour to get added experience. He needs to have plenty before he goes.” However, in the long run the experience was good. From the 1948 season onward Wardle has taken a hundred wickets easily.

Yet there is no reason to believe that Wardle has stopped spinning the ball. Returns of six for 12 and six for 18 against Gloucestershire, six for 20 and six for 19 against Kent, and seven for 49 against Middlesex are performances in recent years which give the lie to such a suggestion. 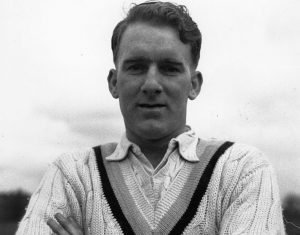 Against Australia at Lord’s last season he bowled – in his capacity of stock bowler – 75 overs and took five wickets for 188 runs. On a turning pitch in the last Test match in Manchester when Australia lost eight wickets for 35 runs, Wardle took four victims at a cost of only seven runs.

Alert and reliable in the field, a hard hitting batsman who violated Roses Match tradition by hitting five sixes in an innings of 79 against Lancashire, Wardle in one way or another is always a useful member of a side. He went to the West Indies again last winter, and it was hoped he would reveal that final polish ensuring his selection for Australia and England fight to retain the Ashes this winter.

With fierce competition for spin-bowling places in the England team, Johnny Wardle played in just 28 Tests, the last one in 1957. He took 102 wickets at 20.39.