John Wisden, a pioneer of cricket who founded the Almanack, was born on September 5, 1826. On the centenary of the founding of his sports business, the 1951 Wisden published this tribute.

The name of Wisden is a household word wherever cricket is played, or indeed spoken about. The centenary of the firm which still bears the name of its founder was a notable event in the annals of 1950.

Outstanding in his day as a fast bowler, despite his small stature, John Wisden ensured the survival of his name by founding the “Cricket and Cigar” shop which has grown and flourished into the great business of today with its worldwide ramifications.

"Easily the smallest fast bowler who ever made history"

He reinsured his fame by starting 14 years later The Cricketers’ Almanack, which has become the acknowledged chronicle of cricket, the universal referee in any argument over the history of the game. The first issue ran to a mere 112 pages, compared with the 1,000 pages of the current number.

The story of John Wisden, his life and times, is set out in detail in A Wisden Century, written by John Hadfield in honour of the centenary. The facts may be briefly summarised.

John Wisden was born in 1826, the son of a Brighton builder. His father died when he was still a boy, and he went to live, as a pot-boy, with Tom Box, the wicketkeeper whose fame later became a legend. With Tom Box he began to learn his cricket. He was described in the chronicles of the time as a hungry-looking lad glad of one’s sixpence for his trouble, but by 1845 he had been chosen to play for Sussex against Kent, and he made his first appearance at Lord’s in the following year when Sussex played their annual match against the MCC. He took six wickets. 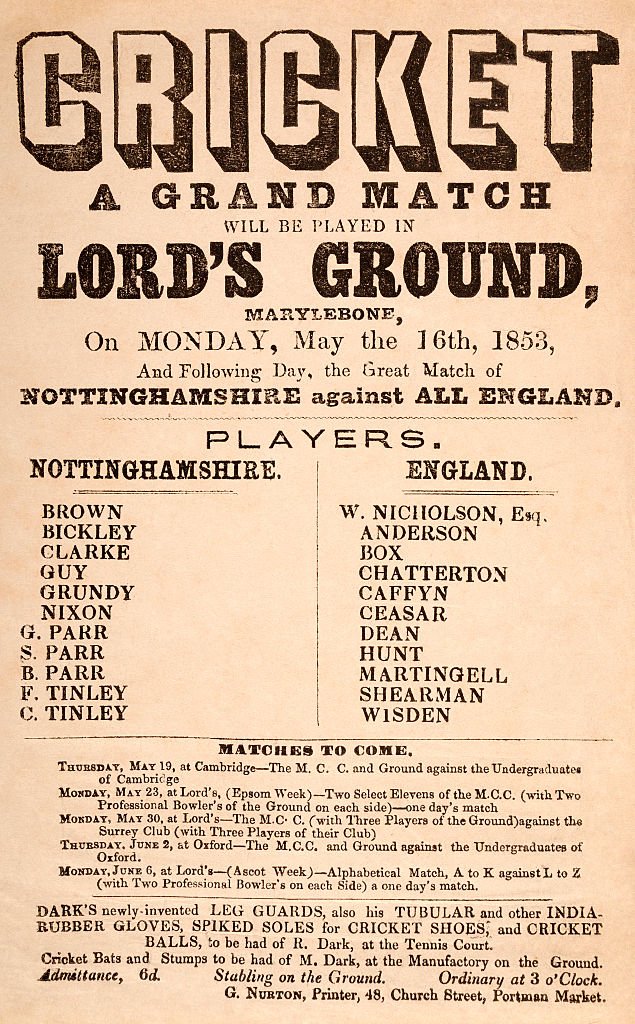 From 1846 until 1863 John Wisden played regularly for Sussex, and Mr HS Altham, in his History of Cricket, describes him as the mainstay of an eleven “which might almost claim the county supremacy in the interregnum between the great days of Kent and the revival of Surrey cricket at the newly opened Kennington Oval,” and as easily the smallest fast bowler who ever made history. It was not long before he came to be known as ‘The Little Wonder’, a title given him by Bob Thoms, a famous umpire of the day, and batsmen were soon to fear his fast and ripping deliveries.

He performed many great feats of bowling. In 1848 he took 15 Kent wickets and 14 Nottinghamshire wickets; in 1849 he took 13 wickets against MCC and Ground at Lord’s, and the same number against the same opponents in the following year. His greatest performance was in 1850, when he appeared, strangely enough, for the North against the South at Lord’s, and in the second innings, bowling from the pavilion end, took all ten wickets clean bowled, a record which still stands unequalled.

From 1852 to 1855 Wisden was professional bowler at Harrow School, where the teaching of cricket was in the hands of the Hon. Frederick Ponsonby, afterwards the 6th Earl of Bessborough. The accuracy of Wisden’s bowling was of great value for coaching. It was not surprising, therefore, that Harrow School itself recognised the centenary when the Head Master accepted a John Wisden Prize of a bat and a ball to be awarded annually to the boy with the best bowling analysis.

In 1846 Wisden was invited to join the All-England Eleven, started by William Clarke, which played a great part in popularising and raising the standard of cricket. Clarke took his eleven all over England, playing against 18’s, 20’s and 22’s, and thus establishing the professional cricketer as a man with some prospect of a career.

For a time all went well, but Clarke was in his way a martinet, and soon several of his professionals were in rebellion against him. Wisden headed the revolt and, with his fellow-Sussex bowler, Dean, started a rival organisation called the United England Eleven. John Lillywhite, Adams and Jimmy Grundy joined them, and in August 1852 they played their first match, at Southampton, against twenty gentlemen of Hampshire. 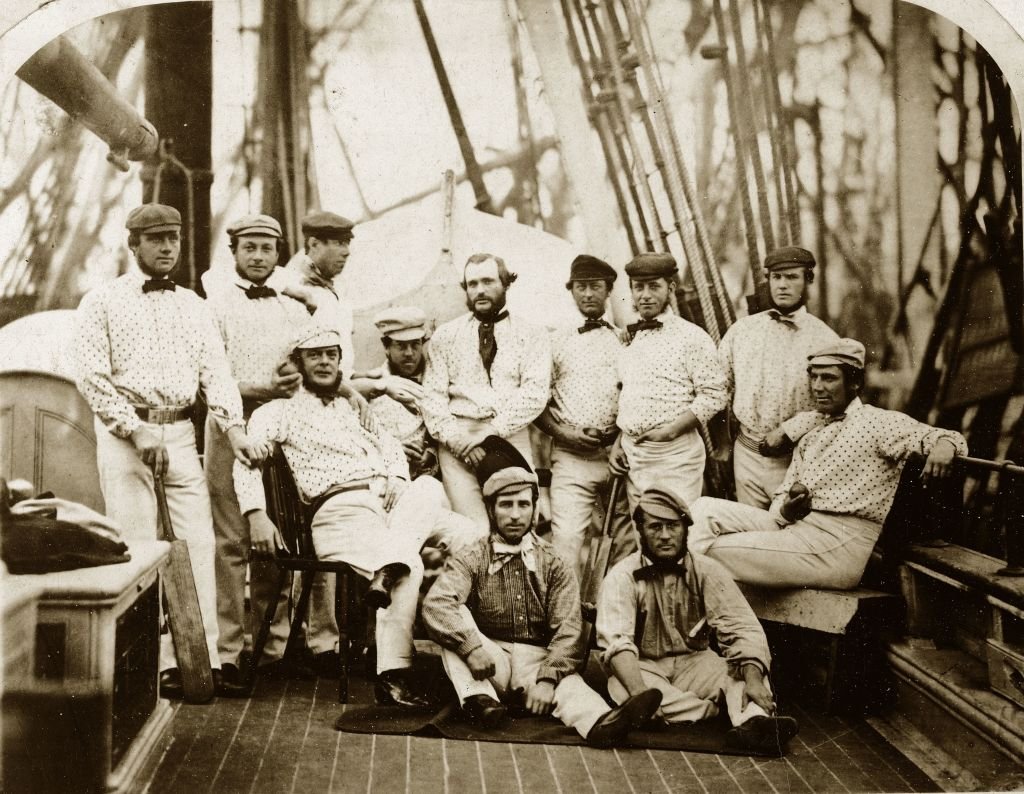 England’s 12 Champion Cricketers on board a ship at Liverpool bound for America. Wisden seated on left

For the next decade England’s professional cricket was divided into two camps, with Wisden’s United England Eleven attracting many of the greatest players of the day. After Clarke’s death in 1856 George Parr became captain of the All-England Eleven and, in 1859, he and Wisden became associated as joint proprietors of a cricket ground at Leamington, and brought the two elevens together in a tour to the United States and Canada. This visit was one of Wisden’s chief contributions to cricket. It set the precedent for all subsequent tours.

The House of Wisden had its beginning nine years before this tour. John Wisden, already part-proprietor with George Parr of the Leamington ground, started in 1850 Parr and Wisden’s Cricket Club, with which he associated the business of sports outfitter. Five years later he moved to London and opened a “Cricket and Cigar” depot in Coventry Street off the Haymarket. There, “radiant with watch and chain of gold”, he became at once the well-to-do, courteous proprietor of a West End cricket emporium.

On Wisden’s death in 1884 the business passed to his manager, Henry Luff. The latter part of the nineteenth century saw a very large growth in the popularity of all games and sports. With this expansion there naturally came an increasing demand for all kinds of sports gear. Under Luff’s enterprising management the House of Wisden set out to satisfy the public’s needs, from boxing gloves to badminton, from fives to footballs. The firm has never lost its impetus. In the course of time several other businesses have become absorbed into its organisation. 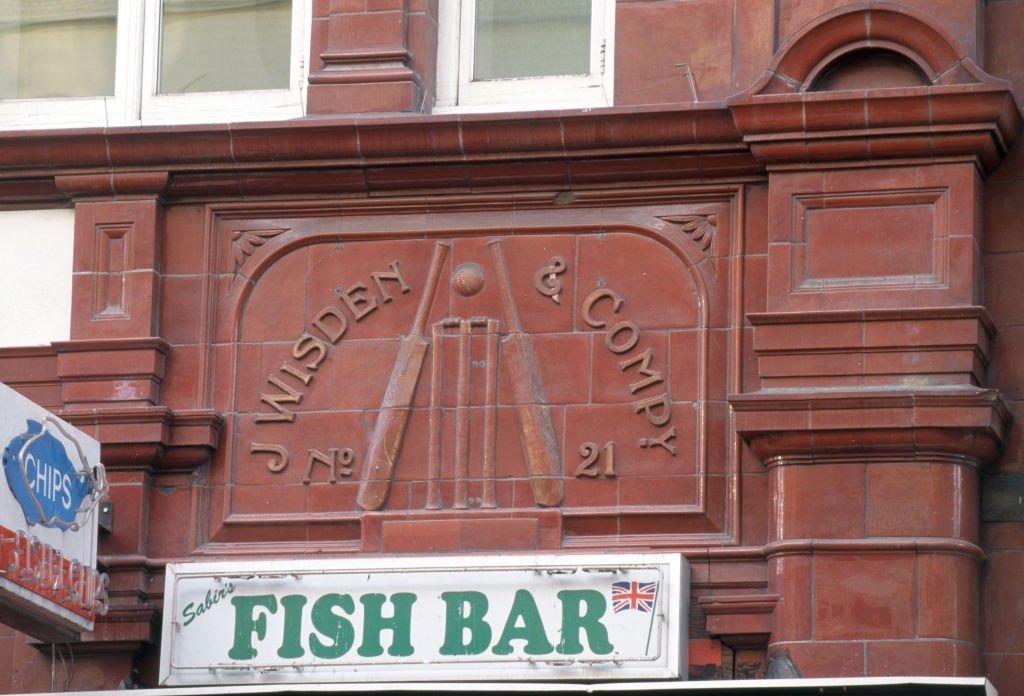 By its amalgamation in 1920 with the well-known Kent firm of Duke and Son, its main factory became fixed at Penshurst. Thus it is as a neighbour – but not, alas! as a cricketer – that I pay my tribute to the House of John Wisden & Co.

Fortunately, cricket has an appeal far wider than the mere playing of it. WG Grace occupies a place in the history of sport which is still unshaken by any rival. Don Bradman is a hero to thousands who will never hold a bat straight. It is a national game, a true reflection of our peculiar temperament. But, like a sturdy plant, it has struck its roots and thrived on a variety of soils along with a number of other growths of indigenous British origin.

It seems natural, therefore, that a message of goodwill to the firm on its centenary from the Prime Minister should have its counterpart in a similar message from the Australian Prime Minister.” Wisden and cricket are synonymous”, said Mr. Menzies. So it seemed to Mr. Oliver Lyttelton, who presided at the firm’s centenary luncheon and introduced the principal guest, Mr. Harold Wilson, President of the Board of Trade. He, too, appeared to share the same opinion. The many great performers at the game, past and present, who rose to toast the memory of the firm’s celebrated founder, at the bidding of that doyen of cricketers, Sir Plum Warner, bore witness to the accuracy of Mr. Menzies’ words.

“Wisden and cricket are synonymous.” Let this message from Australia be the tribute of the whole British Commonwealth at once to a famous cricketer, to the great enterprise which he founded, and to the game of cricket wherever it is played.