John Edrich came from a famous cricketing family, but had to make his own way in the game. In 1966 his efforts for Surrey and England saw him named a Wisden Cricketer of the Year.

Among the pioneers of enterprising batsmanship during the past decade, the name of John Edrich, the solid, diminutive Surrey left-hander, stands high. He loves to hit the ball. A firm in St. Neots makes his bats which his county colleagues call “The Brown Bombers” because they were recommended by Tony Brown, of Beddington. A product of the famous family of Norfolk cricketers, John is a young cousin of William John Edrich, whose stirring deeds for Middlesex and England will always be associated with his illustrious partner, Denis Compton.

John Hugh Edrich was born at Blofield, near Norwich, on June 21, 1937, and in due course became the fifth member of the family to appear in county cricket. He learned his cricket at his home on a concrete pitch and says as far back as he can remember he always had a bat in his hand. His father first bowled to him when he was around the age of five. From the time he was eight until he was 17 he was educated at Bracondale School, Norwich. He was only 14 when he played for Blofield village on Saturdays and South Walsham on Sundays, for whom he hit his first hundreds. In those days he also kept wicket and at Easter attended the cricket coaching classes at Britannia Barracks, Norfolk, conducted by C.S.R Boswell, the Norfolk and former Essex player.

At one time captain of Norfolk colts, Edrich made his first step into bigger cricket in 1954 when he played for Norfolk in the Minor Counties competition and showed sufficient consistency to head their batting with an average of 34.28, top score 56.

During the following winter he began to think seriously about his future. He did not consult his parents, and cousin William was in Australia with MCC. He wondered whether he should apply to Lord’s for a trial, but he went to Bill’s father who pointed out that it might be wiser for him to stand on his own two feet instead of relying on W.J. to push him at Middlesex and possibly be accused of family favouritism.

So John wrote to Surrey, enclosing a report from L.A. Barrett, the Norfolk captain. A satisfactory trial at The Oval followed, and in 1955 he topped the Surrey batting in the Minor Counties, making 762 runs average 44.82, highest innings 100. Edrich appreciates the sound coaching he received at The Oval, first from Andrew Sandham and later from Arthur McIntyre. Surrey lost him full time for two seasons while he was doing National Service, but he played a fair amount of cricket and in 1956 at Southampton hit what he terms his first important century, 100 not out for The Army against Hampshire. 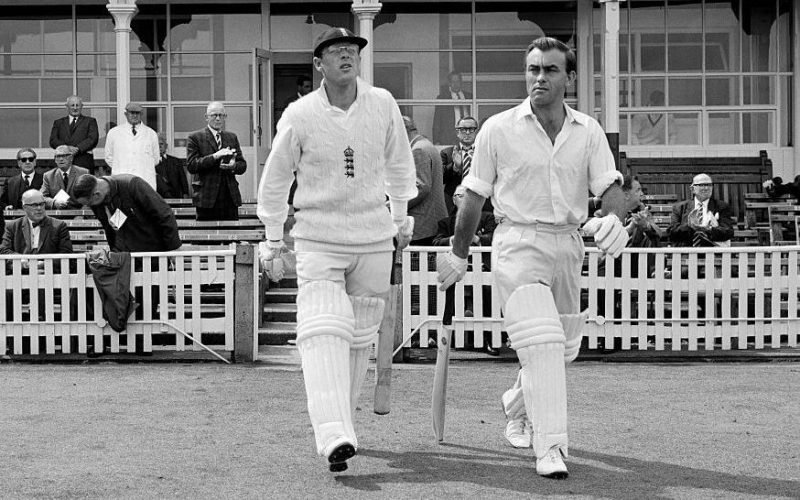 John Edrich (right) and Geoff Boycott walk out to open the England innings at Edgbaston, 1968

On his return to civilian life in 1958, Edrich remained one of the useful reserves at Surrey’s command. This was the year Surrey completed their record seventh successive Championship, and the title had already been decided in their favour when in the last match of the season he made his debut in first-class cricket on a sporting pitch at The Oval. Worcestershire, who won by 117 runs, dismissed Surrey for 57, their lowest total of the summer, but Edrich was not disgraced; he took out his bat for the top score, 24.

Now we come to the most vital phase of his career. Edrich was still only 21 when the summer of 1959 began and again Surrey were in the thick of the fight for the Championship which in the end they had to yield to Yorkshire with Gloucestershire second. For Edrich it was a momentous season. His chance came at the last moment in the Whitsuntide match at Trent Bridge because Clark and Fletcher were unfit.

Until then he had never opened an innings in his life, but they sent him in first and in this, only his second first-class appearance, he hit 112 and 124 against Nottinghamshire. He followed with two more centuries in his next three matches and completed his 1,000 runs in 19 innings. Small wonder his claims were being advanced for a place in the England team when a broken finger put him out of action for four weeks; a similar injury kept him idle in the last three matches.

Nevertheless, in all games in his first season, Edrich scored 1,799 runs, average 52.91, including seven hundreds. He has never looked back. In fact, in his seven England seasons his aggregate had never fallen below 1,700; in 1962 it reached 2,482 and last summer 2,319. Before he went to Australia with MCC last winter, he already had 39 first-class hundreds to his credit.

Altogether, Edrich has broken the first finger of his left hand four times and claims he is the only batsman who can be lbw when struck on his hand. That friend of many sportsmen, W.E. Tucker, solved his trouble by grafting a piece of leg bone into his hand! 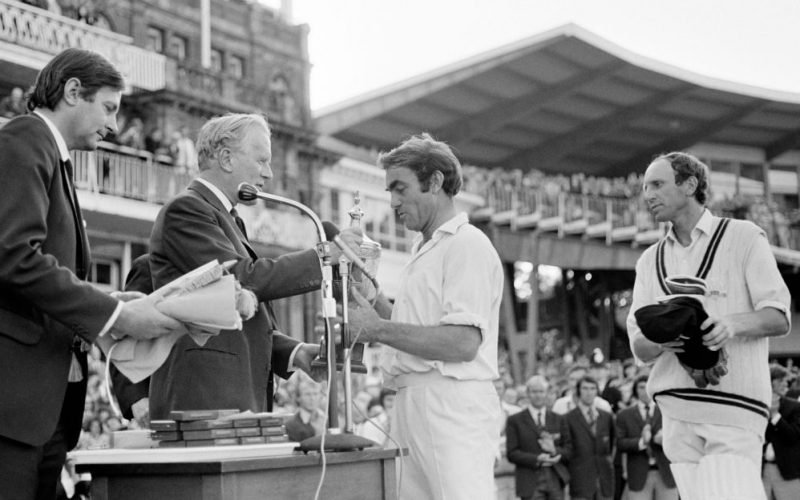 John Edrich is presented with the Benson and Hedges Cup at Lord’s, July 1974

While Edrich has flourished with Surrey, he has had a chequered career as an England player. He first appeared for his country in three Tests against West Indies in 1963, but six innings facing Hall, Griffiths and Sobers yielded him only 108 runs. The following winter he went to India with MCC, but a throat infection kept him out of the first three Tests and his scores against India in the last two were confined to 41 and 35.

Just as injury to colleagues gave him his first break for Surrey, so did it twice provide the chances for him to make his mark for England. An injury to Boycott compelled the selectors to look for another opener in 1964 for the second Test against Australia. Choice fell on Edrich and he achieved the rare and coveted distinction of hitting a century at Lord’s in his first match against Australia, 120 out of a modest total of 246. Edrich did little in the next two Tests at Headingley and Old Trafford and not only was he dropped from the final at The Oval, but also from the MCC team that toured South Africa.

Few opening batsmen hit the ball as hard as Edrich

Nor was he picked for the first two Tests against New Zealand last summer and it seemed that Boycott and Barber had become England’s established opening pair, but the Yorkshire player had to drop out at Headingley and Edrich celebrated his recall to the England team by batting superbly for 310 not out; he was on the field throughout the match. A full description of his innings and the various records he set up on that occasion can be found in the match report in the New Zealanders section of the Almanack.

Few opening batsmen hit the ball as hard as Edrich. His zest for sixes equals that of Harold Gimblett, the Somerset opener of 30 years ago. Last summer, Edrich cleared the boundary 49 times. The number must have been higher had not Peter Pollock, the South African fast bowler, put him out of action at Lord’s in the very next Test following his triple hundred. 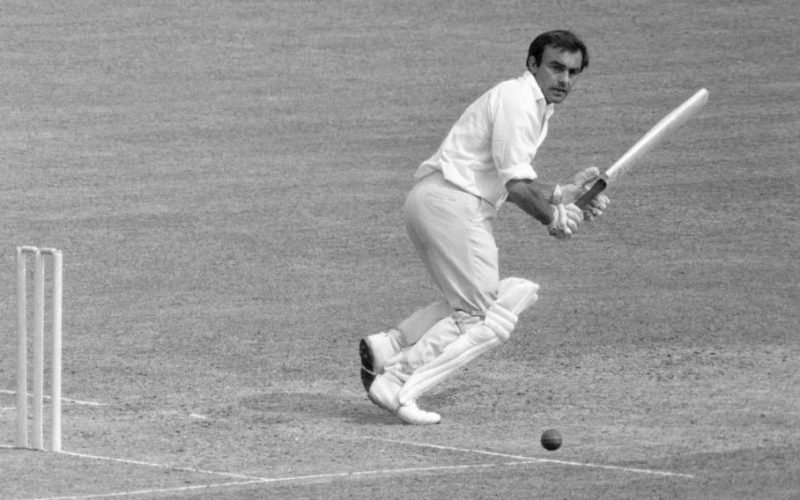 From his early days, John Edrich scored freely off the back foot, excelling with the square drive. Now he possesses a fine range of powerful strokes. He is adept in placing the ball either side of cover and he can hook and pull at will, but best of all is the way he goes forward to meet the half volley to drive it high and straight, or over mid-on, for six.

At one time, when Surrey were short of stumpers they encouraged Edrich to practise his wicket-keeping under the tutelage of McIntyre, but as his batting ripened those ideas disappeared and he had to work hard to become an efficient fielder, close to the bat and in the deep.

Edrich has enjoyed many profitable opening partnerships for Surrey with his captain, M.J. Stewart – with whom it should be added he first played for England. Both study each other; if one is going well, the other will let him have the major share of bowling, or if one is in difficulty the other will do his utmost to shield him over a troublesome period. Sometimes, the left-hander, is better suited to deal with a certain type of bowler or vice-versa. Still, only 28, Edrich should remain a star for Surrey and England in the game to which he has dedicated his life.

With more than a hundred first-class centuries, Edrich more than lived up to his early promise. He played in 77 Tests, making 5,138 runs at 43.54.