In an era when the best players in the world regularly appeared in county cricket, Joel Garner earned his reputation as much with Somerset as with West Indies. He was a Wisden Cricketer of the Year in 1980.

One of the several splendid cricketers who has played his part in lifting Somerset to the pinnacle of cricket in England, and West Indies to holders of the World Cup, is Joel Garner, at 6ft 8in the tallest man to have played Test cricket. Garner and his West Indies companions in the fast bowling set, Colin Croft, Wayne Daniel, Michael Holding and Andy Roberts, all tower over six feet and they comprise the most menacing combination of fast bowlers the game of cricket has known.

What impresses most about Garner is his athleticism. Off the field he seems gangling and awkward. His legs are like stilts, and he has a slight stoop in his walk, not unnatural for one who constantly has to contort himself to get through doors and into beds designed for more conventional frames. Yet he is fast and supple as a fielder and well co-ordinated as a bowler. So far he has not been troubled by the spate of back and muscle injuries which seem to afflict so many other athletes who carry such bulk.

Joel Garner was born on December 16, 1952, bred and raised on the island of Barbados, the idyllic, 166 square miles’ island in the eastern Caribbean, famous for its beaches, its rum and its cricketers. The game thrives there in magnificent climate and ideal conditions as it does nowhere else in the world. Cricket is more than just a game, it is a way of life, and the number of outstanding players born in Barbados is nothing short of a phenomenon. The most famous of all is Sir Garfield Sobers, quite simply the greatest all-round cricketer there has been. The late Sir Frank Worrell, like Sobers, was knighted by the Queen for his services to the game. 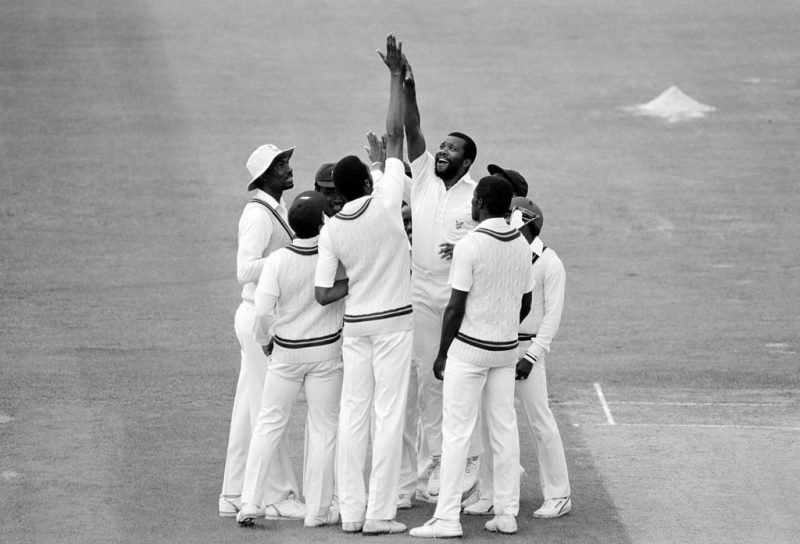 So Garner and other young Barbadians grow up in a strong cricketing environment. Almost from the time he could walk, Garner and his mates would be hitting a ball about with an improvised bat – on the road, on the beach, anywhere with a bit of room. By the time he entered Foundation School, one of the island’s leading grammar schools, at the age of 12, Garner already knew what cricket was all about. He had natural ability, and this needed only to be polished by the former Barbados Test players, employed as coaches by the government. It is a formula which has been well-established over the years, churning out players as if on an unceasing assembly line.

From school, Garner went into the Barbados youth team, into a club side, into the full Barbados team and, finally, into Test cricket with West Indies. The process took 10 years, but Garner was probably luckier than most. To begin with, he had as coaches Wes Hall and Charlie Griffith, who had created havoc with the world’s batsmen in the 1960s.

“At school, we had Seymour Nurse and Everton Weekes as the main coaches, and sometimes Manny Martindale,” says Garner. “We knew they were great players and we all wanted to get as far as they’d done. It was Charlie who made me change my action. I used to deliver with a round-arm, double swing, which he said would not do at all. In a few months, I was doing it the correct way.”

"The trouble is that Garner's hand delivers over the top of the sightscreen, which makes him impossible to sight early"

His cricketing career then moved apace; it was almost as if some fairy godmother had waived a magic bat to clear the path for Joel Garner. First, Test duties in Australia kept Vanburn Holder and Keith Boyce away, and injuries ruled out Holding and Daniel to give Garner his chance of Test selection in 1977. In his first Test series, against Pakistan, he took 25 wickets, while Croft, who owed his place to the same particular piece of fate, claimed 33.

Since 1976, Garner has spent his summers in England, playing first for Littleborough in the Central Lancashire League. In his first season, he took 110 wickets at under 13 apiece, and in the next two seasons, 1977 and 1978, his remarkable all-round form took the club to the top of the table. Each season, his 100-plus wickets cost fewer runs, ranging from 8.54 each to 6.70, and he also topped 500 runs for the summer. His weekend League exploits attracted Somerset’s attention in 1977, and Littleborough’s flexible attitude brought a contract for mid-week county cricket for the next two years.

His part in Somerset’s double success during 1979 admits no arguments as to his potent and continuing ability to swing matches. In the four games in the Gillette Cup, which Somerset won, Garner’s 43 overs brought a total of 17 wickets for 92 runs. This included the best return for a final of 6-29. In the John Player League, which Somerset also won, the West Indian played in 13 of the 16 and ended with 16 wickets for 296 in 96 overs. Curiously enough, he played in all three matches that Somerset lost, one of the quirks of the cricket game. 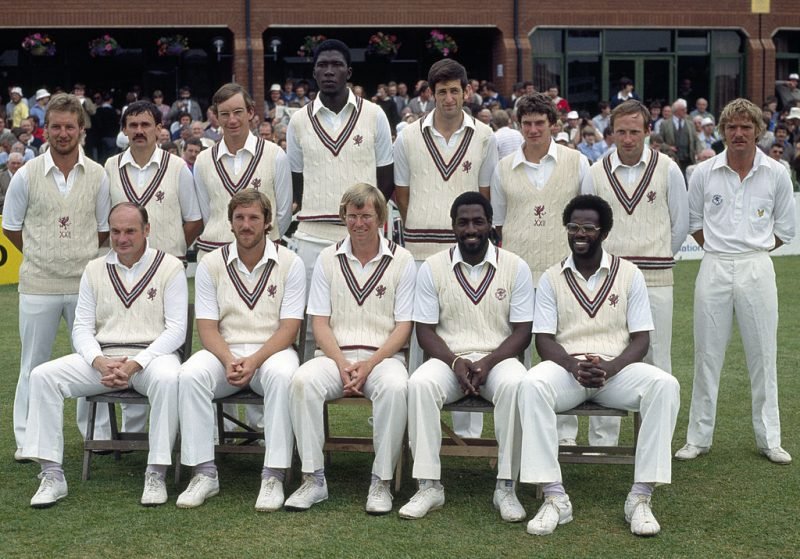 Joel Garner with his Somerset team-mates

Garner, in fact, is not really fast. The top men generate speed through the air of between 90 and 95 miles an hour, if the scientific measurements are to be believed. Garner would be between 75 and 80. Where he is most awkward is in the sharp lift he can achieve from his immense height. The steeper the lift, the more difficult it becomes to counter – hence Garner’s success. In addition, Garner also possesses the ball which complements the bouncer ideally, the yorker. Speared into the batsman’s toes, it is meant to trap the batsman softened by the bouncer.

England’s captain, Mike Brearley, itemised another advantage of Garner’s height. “The trouble is that Garner’s hand delivers over the top of the sightscreen, which makes him impossible to sight early,” he said. “When you have one ball getting up chest height and another coming in at your toenails, it’s jolly difficult to survive, especially when you’re looking for quick runs as we were.”

Now only 27, Garner is still young for a Test cricketer. He is an immensely strong individual who, unlike so many fast bowlers, does not take everything out of himself with a massive approach to the crease. Moreover, he usually bowls very straight, the sort who can regularly rip away troublesome tailenders.

"He is never a broody bowler. There's no fuss or bother, although he does not really appreciate being told not to bowl short"

Brian Rose, the Somerset captain, says Garner is easy to handle: “He is never a broody bowler. There’s no fuss or bother, although he does not really appreciate being told not to bowl short. But we’ve all been thumping it in to him to keep it up and results have been marvellous.”

Garner’s experience with Somerset has been dramatic from the start. In his first match, against the 1977 Australians at Bath, he dismissed McCosker with the fifth ball of the match [a fine slip catch by Botham] and went on to take 6-137 in Somerset’s first victory over the Australians in 84 years of trying.

Right now, West Indies cricket is on top of the world – and so is Joel Garner. Things have gone his way, and he has been talented and sensible enough to make the most of his chances.