Jan Brittin was one of England’s greatest women cricketers, with records galore in Tests and ODIs. Her Wisden obituary in 2018 celebrated a great talent.

There was much more to the gilded career of Jan Brittin than the statistics that identify her as one of the greats of the women’s game. Team-mates held her in awe, and opponents were often lost in admiration for her relaxed, classical technique. “I loved watching her bat – even when she was getting runs against us,” said the former New Zealand captain Debbie Hockley. Brittin’s 19-year England career – 1979 to 1998 – bridged two distinct eras: in her first Test, Rachael Heyhoe Flint was a team-mate; in her final series, she opened with Charlotte Edwards.

Although Brittin scored high marks for artistic impression, it did not compromise her competitiveness. “She looked after herself, when the rest of us were happy to eat rubbish and have a few drinks,” said England team-mate Jackie Court. “She was a professional in an amateur era.” Brittin held two records that, given the reduction in women’s Tests, may never be beaten. She is the leading scorer in the format, with 1,935 runs at just under 50 in 27 matches, and the leading centurion, with five. She made 2,121 runs at 42 in 63 one-day internationals, also with five hundreds.

And she was a magnificent fielder. “She was a wonderful athlete,” said Enid Bakewell. “She would field at mid-off or cover and nobody ever took a run to her. She watched the angle of the bat intently to see where the ball would go.” Her electric work led to a landmark moment: because her legs were so often grazed and bloody from sliding stops or diving catches, it was decided to switch from skirts to trousers.

Brittin came from a sporting family. Her father Kevin played cricket for Surrey and football for Tottenham Hotspur at junior levels, and ran a sports shop in Surbiton. She excelled at hockey – she played three indoor internationals for England in 1987 – but at the age of 12 attended a steam fair with her grandparents, and performed impressively on a catching machine. The woman running it recruited her instantly for Tadworth Cricket Club. Her progress was rapid. While a student at Chelsea College of Physical Education in Eastbourne, she made her Test debut, aged 19, against West Indies in 1979; her scores were modest, her potential huge.

By the time of New Zealand’s visit in 1984, she was a mature talent and poised for a summer of extraordinary dominance. Now in her preferred position of opener, Brittin made 338 runs at 112 in the three Tests, and 258 at 128 in the ODIs. Wisden said: “She used her feet well and despatched the ball elegantly to all quarters of the field, bringing back memories of a former outstanding England batsman, Molly Hide.” She ended the season on the cover of The Cricketer. Her exploits won her a crate of champagne, which she happily shared with team-mates before they went to Australia that winter. “It would never be allowed now,” said Brittin. “But it certainly added to team bonding,” She made her first overseas century in the First Test at the WACA, but Australia won the Ashes 2–1. 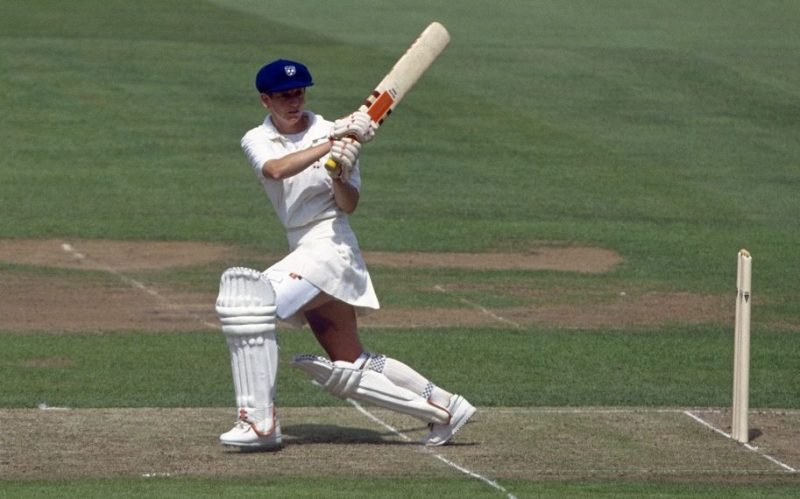 She regarded the 1993 World Cup as her career highlight. She had been part of the team that had lost to Australia at Christchurch in February 1982, and in December 1988 had top-scored for England in the final with 46 not out, only for Australia to knock off the runs at the MCG. “The ground seemed a very large and a very lonely place,” she said. Five years later she began the tournament with a hundred against Denmark at Banstead, and made another against India at Finchampstead. She found the final an emotional occasion: she was reduced to tears when she and her opening partner Wendy Watson were given a rousing reception as they walked through the Lord’s Long Room on their way out to the wicket.

But the tears soon dried, and she again top-scored, with 48 in England’s 195 for five. New Zealand folded in reply, and Brittin took the catch that won the World Cup, running back to cling on to Catherine Campbell’s slog. “Dropping it was never an issue,” wrote Mike Selvey in The Guardian. “Up went her arms – the ball was last seen heading aerially towards Swiss Cottage.” Brittin described it as “the stuff of dreams”. By the time England lost in the semi-finals in Chennai in 1997, she was the leading run-scorer in women’s World Cups, with 1,299 at 43 in 36 matches, a record that passed to Hockley in the final. Against New Zealand at Guildford in 1996, Brittin opened with the 16-year-old Edwards, old stager and tyro putting on 63. “To know I was going to open the batting with my hero Jan Brittin – wow,” said Edwards. “It was four days I’ll never forget.”

Related Story: Watch: 1 over, 55 to win – Brian Lara, the leg-spinner, into the attack

Brittin’s valedictory season in 1998 was a personal triumph. In three drawn Ashes Tests she scored 450 runs at 112, including 146 at Guildford and 167 at Harrogate, batting more than 24 hours in all. After that she concentrated on her golf handicap, coaching at her former county Surrey, and beginning a new career in teaching, after working for British Airways for most of her cricket career. “For girls of my generation she was our first female role model,” said the former England captain Clare Connor. “She was so beautiful to watch.”