Jack Russell was a rare beacon of light for England during the dreadful Ashes summer of 1989. His efforts – with the bat as well as the gloves – made him one of Wisden’s Cricketers of the Year in 1990.

At the beginning of 1989, Jack Russell had played only one Test for England and was not considered a good enough batsman to merit a place in the one-day squad to face the Australians. By the end of the year, he was the only Englishman who could justifiably expect a place in anyone’s World XI.

In the course of a summer of England mediocrity on the field, and damaging South African recruitment off it, Russell sailed serenely through the storm, proving he could reproduce his supreme wicketkeeping performances for Gloucestershire in the intensity of Test cricket.

He was one of only two ever-presents in the England side (the other was the captain, David Gower), and when he went to India for the Nehru Cup in October – now as one of the old hands in the new-look squad – Russell was outstanding. In the most demanding of conditions, he demonstrated that in one-day cricket, as much as in Test cricket, a team needs its best gloveman behind the stumps. Russell was in a class of his own in the six-nation tournament, and in the space of six months he had, quite simply, established himself as the best wicketkeeper in the world. 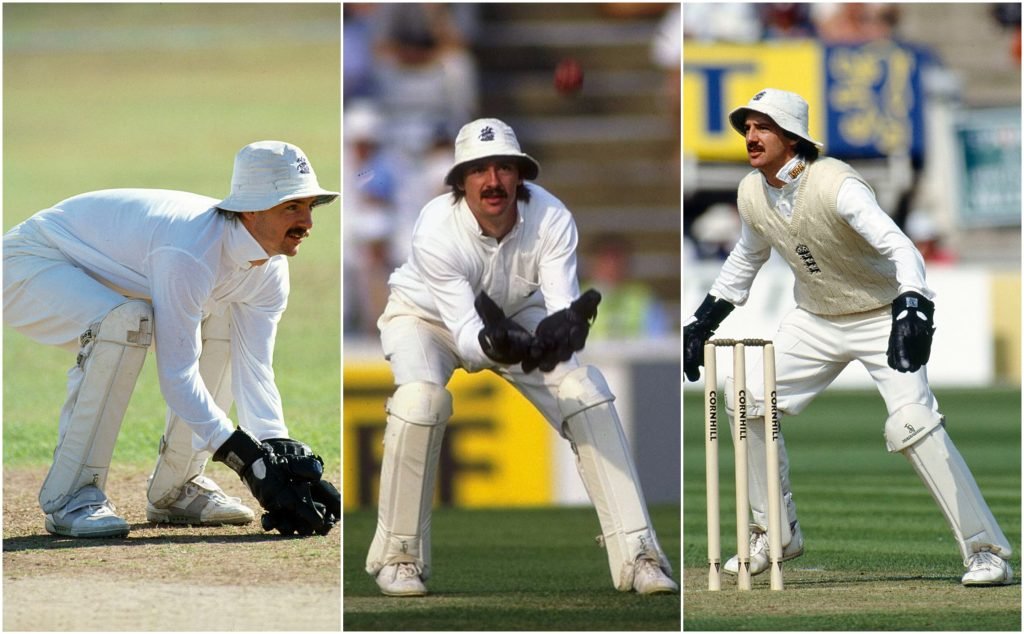 A late bloomer, Russell soon established himself as one of the best wicketkeepers in the world

Yet, as is often the case with the best – and Russell is, believe many experts, in the Knott-Taylor class – his work goes unnoticed until the rare fumble. The irony of Russell’s year was that it was his batting, a weakness which had delayed his England selection by at least a year, that brought England’s supporters to their feet during a summer when they spent most of the time sat glumly, with not even a rain-cloud to provide relief. They did not have many opportunities to feel pride, but Russell the batsman produced at least a few.

Related Story: Outside Asia, is Jack Leach the Test spinner England are looking for?

Early arrivals on the first day of the second Test at Lord’s might have noticed a curious sight at the Nursery End nets. A group of MCC groundstaff boys were hurling scarlet plastic balls at an England cricketer from 15 yards. For 20 minutes, Russell did not play a shot. He simply ducked and swerved, avoiding each delivery. The Australians had decided in the first Test that the left-handed Russell was vulnerable – plain scared, if you like – to anything bowled short and fast at the body. Russell, with Alan Knott as his adviser, was determined to work it out, and subjected himself to a trial by teenagers, which many of his colleagues would have found demeaning.

He also decided that the best response to the verbal bouncers he was getting from the Australian close-fielders while he batted was to answer back in good, old-fashioned Anglo-Saxon. Jack, 5ft 8in and 9st 8lb with his boots on, gave the startled Aussies an earful as well as his best shots. And in the process, he salvaged England’s first innings with an undefeated 64. “That day I played the most important innings of my career. I crossed a mental bridge,” says Russell. “They tried the short-pitched bowling and I coped, they tried all the verbals and I had a go back. You know, they didn’t say another word to me out in the middle all series.” 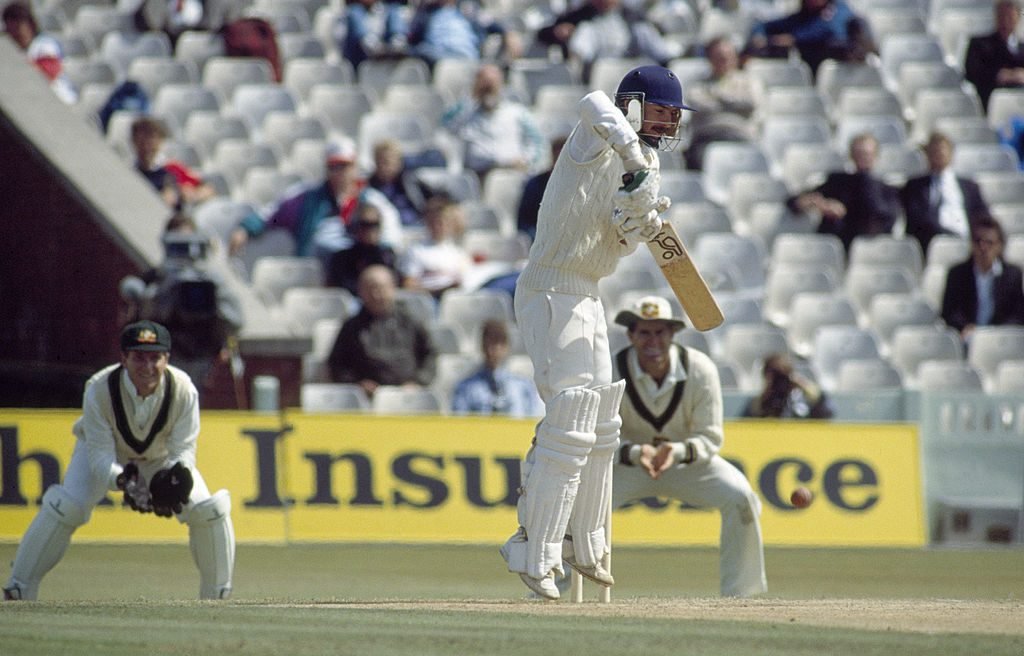 Jack Russell, batting for England during his marathon 128*, in 351 minutes in the fourth Ashes Test

Russell gripped on to his advantage like a terrier with a bone. In the next Test, at Edgbaston, he was the second-highest scorer in England’s first innings, with 42, and then up at Old Trafford for the fourth Test came his greatest moment – on a day that became known as Ash Tuesday for English cricket. England were in the throes of surrendering the Ashes amid the turmoil caused by the announcement of Mike Gatting’s rebel party for South Africa, three of whom were sitting in the England dressing room at the time.

Russell had gone to the crease the previous day with the scoreboard reading 38-5 and an innings defeat looking a certainty. It seemed hopeless, but Russell played one of the gutsiest innings you are likely to see. For almost six hours, he held up Australia’s celebrations by scoring 128*, his maiden century, not only in Test cricket but in all cricket. It was an achievement matched by only one other Englishman this century, Billy Griffith against West Indies in 1947-48; it was a great, and almost match-saving, achievement. And yet, it scarcely received the acknowledgement it deserved amid the rest of the day’s news. To Jack, however, it meant the earth. 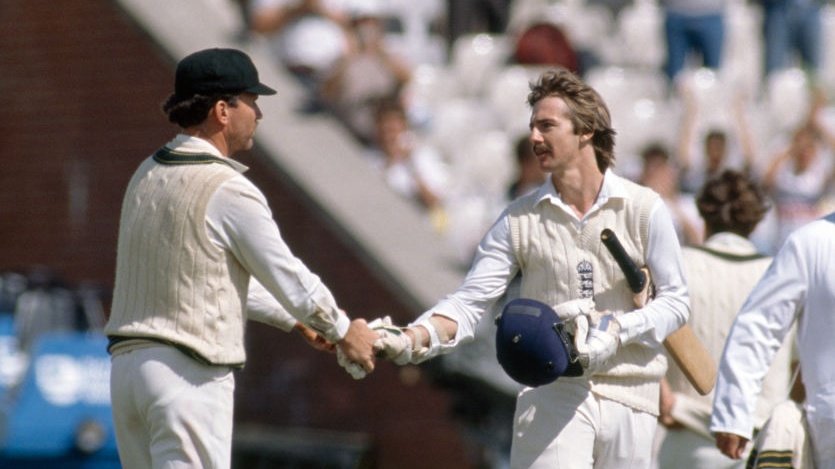 He had come so close to his maiden century on his Test debut eleven months earlier, when he went in as nightwatchman against a Sri Lankan bowling attack that was not up to county standard. He edged to 94, and when he got himself out, he thought then that his chance of a Test hundred would forever elude him. When he reached 94 again at Manchester, he seized up with nerves. “Those six runs seemed to take six hours. I didn’t know what was going on around me,” he recalls.

“I didn’t care about South Africa or the Ashes for a while, I had tunnel vision. Afterwards, the disappointment of losing another Test and the Ashes outweighed any personal satisfaction, and I don’t think my achievement sunk in until a couple of days later, when I walked out for a match at Jesmond, and the crowd gave me a standing ovation and started to cheer.” Russell finished the Ashes series as England’s third most successful batsman, with 314 runs and an average of 39.25.

Robert Charles (Jack) Russell was born in Stroud on August 15, 1963. He played cricket for his local comprehensive school, and at Stroud Cricket Club with his father, John. As captain of the boys’ team, young Jack – he has always been Jack – gave himself the honour of opening the batting and bowling. Then, two days before his 14th birthday, he saw a catch on television that changed his life. “McCosker … caught Knott … bowled Greig, Headingley ‘77″. He reels it off as if it were yesterday. “Low down, one handed, across first slip. Brilliant. I thought then that I would like to be able to do that. That’s where it started, that was the inspiration.”

Russell was soon a boy among men in Stroud’s first team, alongside his father, and within four years he was keeping wicket for Gloucestershire’s first team. Derbyshire’s England wicketkeeper of the time, Bob Taylor, soon saw a like spirit and talent in the quiet, slight lad with the West Country accent, and gave Russell all the help he could. More recently, Alan Knott had turned from being boyhood hero to friend and adviser, helping Russell toughen his mental approach for the five-day game, whether keeping or batting. 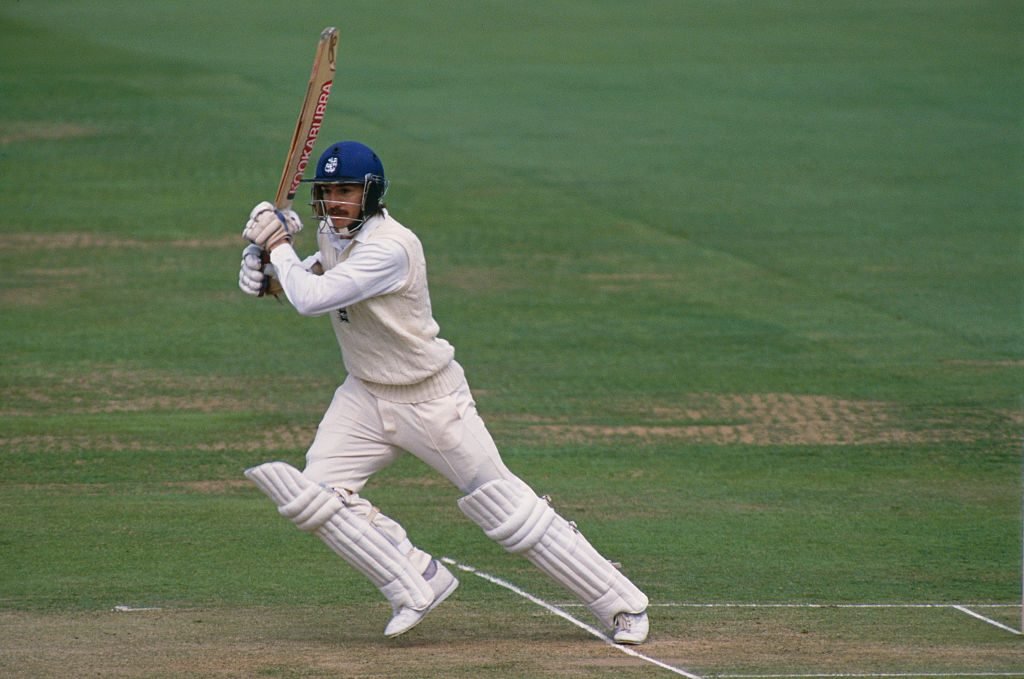 Russell attributes his success to Alan Knott, who helped him toughen his mental approach for the five-day game

Like Knott, Russell, in his floppy white hat and taped-up pads, looks as dishevelled as a truant schoolboy behind the stumps, but he is immaculate in his preparation and work. He has the fitness of a jump jockey and the finesse of a fencer. And like most wicketkeepers – as with goalkeepers in soccer – he is cheerfully self-contained: an independent spirit in a team game.

He eats nothing but steak and chips on tour – not always easy in the likes of Nagpur and Gwalior – and when he wants to relax, it is not with the headphones and lager can to which most of his colleagues turn. Rather, it is an adventure out into the local surroundings, whether that be the tranquil banks of the Severn in Worcester or the teeming shanty towns of Bombay, sketchbook, pencil and camera in hand.

Russell had discovered a penchant for drawing, and the hobby he took up to pass the time on rain-affected English summer afternoons has become a second profession. His work has created such an impression that he has had books published and his work exhibited in a London gallery. Jack Russell, the ‘keeper with drawing power.