Ivo Bligh captained England on the tour that led to the creation of the Ashes. His Wisden obituary, in the 1928 Almanack, recalled his contribution to the game.

As a small boy he received some coaching from Farmer Bennett, and at Cheam, where he had some of the Studds among his companions, his bowling gained him a place in the Eleven. Naturally, he developed his cricket considerably whilst at Eton, and in his four matches against Harrow and Winchester – in 1876 and 1877 – made 106 runs with an average of 26.50, his highest innings being 73 against the latter side in 1876. Eton won three of the four games with an innings to spare: the other, against Harrow in 1877, was drawn with the position fairly open.

A feature of Mr Bligh’s batting was his driving – he was 6ft 3ins in height – and, until ill-health handicapped him, he was a capital long-field and point. At Cambridge he gained his Blue as a Freshman, being the last choice, and so was a member of the famous team of 1878, which played eight matches and won them all – that against the Australians, at Lord’s by an innings and 72 runs.

His association with the Kent eleven, owing to ill-health, extended only from 1877 to 1883, during which period he played in 47 matches, scoring 1,490 runs with an average of 18.86 and occasionally, during the absence of Lord Harris, leading the side. There can be little doubt that, had he remained in full vigour, he would have developed into a really great batsman, for he was only 21 when his breakdown occurred. In 1879 and 1880 he had represented the Gentlemen against the Players three times, and, although he played no large innings in the matches, he showed consistent cricket in making 55 runs for three times out. 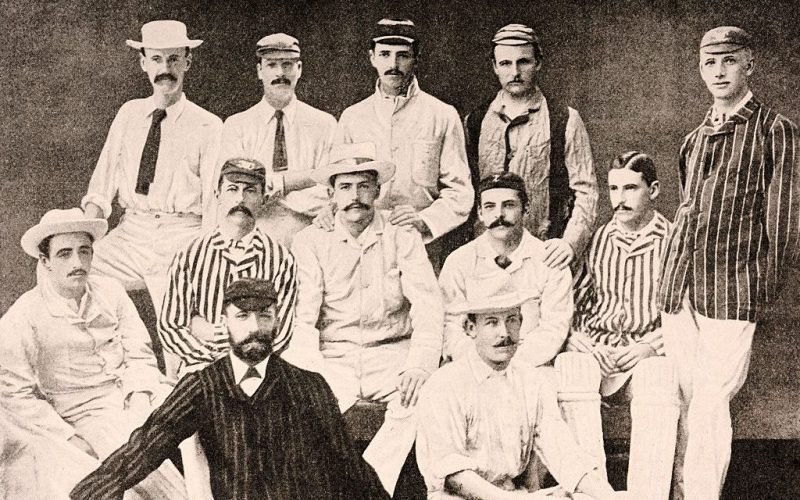 The most interesting episode of his short career was his visit to Australia in 1882/83 as captain of a team in an endeavour to regain for England the laurels lost in the historic Test at The Oval the previous summer. The Australians, under W.L. Murdoch’s captaincy, had then, it will be remembered, won, after a thrilling finish, by seven runs – a result which led to the term The Ashes being coined. The said Ashes were supposed to have been taken to Australia, and hopes ran high that Mr Bligh’s team would recover them.

As it happened, Mr Bligh was successful in his quest, for, meeting Murdoch’s men in three matches the Englishmen, after losing the first by nine wickets, won the second by an innings and 27 runs and the third by 69 runs. It is true that in a fourth game later in the tour, Australia – not solely Murdoch’s men – were successful by four wickets: still, the rubber having been gained against the side which had defeated us at The Oval, honours were considered to have been won by the Englishmen.

Mr Bligh’s interest in cricket remained as great as ever after he had dropped out of first-class matches, and he was president of MCC in 1900 and of the Kent CCC in 1892 and 1902. Apart from cricket, he had whilst at Eton distinguished himself greatly at rackets, having been champion in the singles in 1876 and one of the champions in the doubles in both that year and the next, while he represented Cambridge at tennis in the singles in 1879 and 1880, and in the doubles in 1878 and two following years.

Later on he played a fair amount of golf, but his great love was always cricket – the game with which his family had been associated for nearly 150 years. Lord Darnley was one of the most genial and kind-hearted of men. Only a short time before he passed away he penned some interesting reminiscences of Mr F. R. Spofforth for publication in Wisden.