Imran Khan made his presence felt both as a thoughtful leader and as a quality all-rounder during Pakistan’s 1982 England tour. He was named a Wisden Cricketer of the Year the following spring.

In the early part of last season, before he had turned into the glamorous public figure he was soon to become, Imran Khan was playing as usual for Sussex in the County Championship. During their game at Edgbaston, Imran hooked a ball from one of Warwickshire’s pace bowlers down to the fine-leg fielder, who caught it but then carried it over the boundary: not out. Nothing daunted, Imran tried another hook-shot at the very next ball, and gave a simple catch to square leg. On seeing this indiscretion, a Sussex colleague commented: He would be a great player if only he used his head.

By the end of the season Imran had combined thoughtfulness with a natural ability which had always been outstanding. What brought about this transformation, as Imran readily admits, was his appointment to the captaincy of his native Pakistan. This sense of responsibility turned a fine cavalier into a great cricketer.

Whether the newly transformed Imran had become the equal of Ian Botham as an all-rounder made one of the liveliest debates of the summer. On the one hand, Imran did not have the batting record in Test cricket which Botham had; on the other, Imran as a pace bowler probably had the edge over Botham as he then was. Indeed some critics, Mike Brearley amongst them, rated Imran as the best of all contemporary bowlers even at the relatively advanced age of 29.

Imran Khan Niazi was born in Lahore on November 25, 1952. His father was a Pathan landowner in the region to the north of Baluchistan. His mother was one of three sisters of the Burki tribal family: one sister gave birth to Javed Burki, who became an Oxford Blue and captain of Pakistan; the other gave birth to Majid Khan, a Cambridge Blue and captain of Pakistan. Like his cousins, Imran was born to affluent circumstances in which he could devote as much time as he wished to the development of his cricket. The school which he attended, Aitchison College in Lahore, is considered the most prestigious in Pakistan, and there he was guided by one of the country’s best coaches, Abdurrabb. During his schooldays he also slipped while climbing a tree, and broke his left arm when trying to cling on to a branch. The arm was set badly in hospital and has given Imran trouble ever since – not in his bowling, but he has to practise constantly at holding his bat, otherwise his grip stiffens up.

In 1971, at the age of eighteen, he was chosen to tour England and made his Test début there. In his one Test match, at Edgbaston, he had no success as an in-swing bowler, being far too immature at that age, as he himself knew; so much so that he returned to school after the tour, joining Worcester Royal Grammar, from where he gained admission to Keble College, Oxford. According to Imran, being university captain in 1974 was little use in giving him experience of later office, but he developed his batting at Oxford to the extent of two centuries in a match against Nottinghamshire. He also launched his reputation for being able to deliver a fearsome bouncer that would swing in at a right-handed batsman’s head. Worcestershire, not surprisingly after the help they had given him, were dismayed when he decided to leave after only one full season with them.

Imran’s sudden move, which brought him a three-month suspension in early 1977, took him to Brighton, where the swinging pace of life and of the Hove pitches was more to his taste. There he became a dashing No. 5 batsman, and experimented with his bowling action until he had mastered the out-swinger. He considers that his time spent with World Series Cricket was decisive in making him a complete bowler, for while Mike Procter advised him on his run-up, John Snow assisted him in turning his left shoulder more towards fine leg, to help achieve the out-swinger. Imran feels that he has been technically competent as a fast bowler only since 1979/80.

Unfortunately for Imran, Pakistan had no more than a handful of Test matches over the next two years in which he could display his full prowess. When he did have the chance to prove himself, in Australia in 1981/82, he was judged to be the player of the three-match series. During that series against Australia he overtook Fazal Mahmood’s record of 139 wickets for Pakistan. Having missed their following two Tests against Sri Lanka, after joining the boycott by senior players, he took fourteen wickets against them in Lahore to register his best Test performance.

His feat, therefore, against England last season, of taking 21 wickets in three Tests, was nothing extraordinary by his recent standards, which have been of the highest. He began with six wickets in England’s first innings at Edgbaston, bowled with magnificent stamina in their second innings at Lord’s, and took another eight wickets at Headingley. His run-up made a most exhilarating spectacle as he charged in, leaning forward from the waist, and leapt at the crease; so did the end-product of some extremely fast, in-dipping yorkers and virtually unplayable out-swingers. 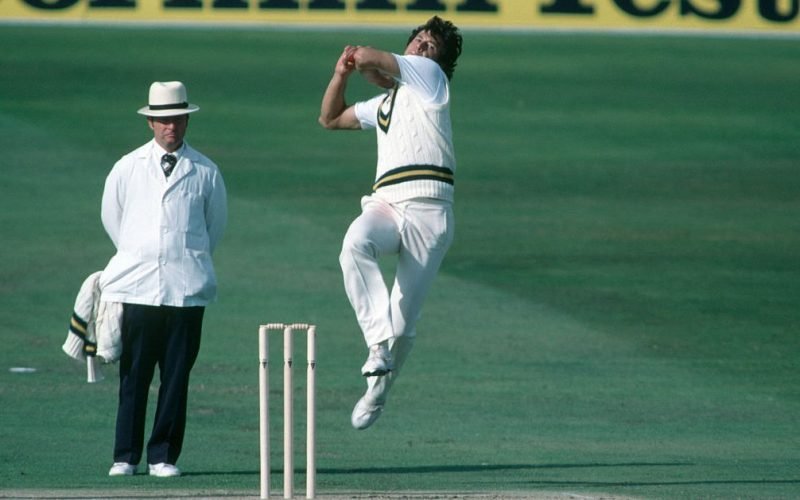 This much, however, was expected of Imran Khan. The surprise was his common-sensical approach to batting now that he had the captaincy. It had been given to him as a compromise candidate in the dispute between Javed Miandad and Pakistan’s senior players, but he was more tactically astute than a mere novice. He could justify not taking a new ball on the last afternoon at Lord’s – a tactic which he thinks is too often a cliché – by arguing that Mudassar did not know how to use one. As to the charge of over-using Abdul Qadir in the third Test, Imran felt it was sheer bad luck that Qadir had one of those off days to which every leg-spinner is subject. But Imran primarily places the blame for his 2-1 defeat – with much justification – on the ill-discipline of his batsmen.

Imran’s own batting, meanwhile, was progressing so rapidly that his No. 7 position, and record of only one Test century, had become false labels by the time of Headingley. There he scored more runs in the match that anyone else, and he was dismissed only once, when hitting out with the last man in. The maturity with which he chose his strokes was astonishing to those who had known him only as a Sussex player.

Having won belated fame in his 30th year, Imran’s private life became a regular subject of discussion in certain newspapers. As he was not married at the time, and handsome of face and build, the matter of his future wife was widely speculated upon. Imran himself, however, said that he did not intend marriage so long as he was playing full-time cricket, which could keep the females amongst his admirers in suspense for the next two or three years at least.

Imran Khan went on to become one of the game’s greatest all-rounders and Pakistan’s first-ever World Cup-winning captain in 1992. A popular figure ever, he’s currently serving as Pakistan’s 22nd Prime Minister.