Ian Johnson had an ill-timed ascnet to Australia captaincy, but he was a respected figure and an occasionally destructive off-spinner.

Ian Johnson captained Australia in 17 of his 45 Tests. Unfortunately for him, he took over in the mid-1950s, when Australian cricket was decidedly inferior to England’s for the first time since before the Bradman era, and he became the first 20th-century captain to lead Australia to defeats in successive Ashes series.

His problems were worsened because he had been controversially preferred to Keith Miller, and many Australians regarded him almost as a usurper. Inter-state rivalry had played a part in Johnson’s selection, but it was also a rather English sort of decision: Johnson, who had something of an amateur’s bearing, appealed more to many members of the Australian establishment than the more wayward Miller. But he was a fine cricketer and, in some respects, a visionary.

Johnson made his debut for Victoria as an 18-year-old and emerged, after wartime service, as a mainstay of Australia’s attack. He was an off-spinner in a country traditionally keener on wrist-spin and, according to EW Swanton, “probably the slowest bowler to achieve any measure of success in Test cricket”.

His action was compared to a corkscrew (and occasionally had its legality queried), but in the right circumstance his flight and dip could not merely tantalise batsmen, but madden them. Against England at Sydney 1946/47, he floated the ball into the breeze to take six for 42 in 30.1 eight-ball overs.

Though he did little in the Tests in England in 1948, Johnson reasserted himself in South Africa in 1949/50, taking 5-34 to help win the Durban Test. But his form declined after that, and he failed to make the 1953 tour of England. Later that year, he succeeded Lindsay Hassett as captain of Victoria, but there seemed little chance of him playing for Australia again. 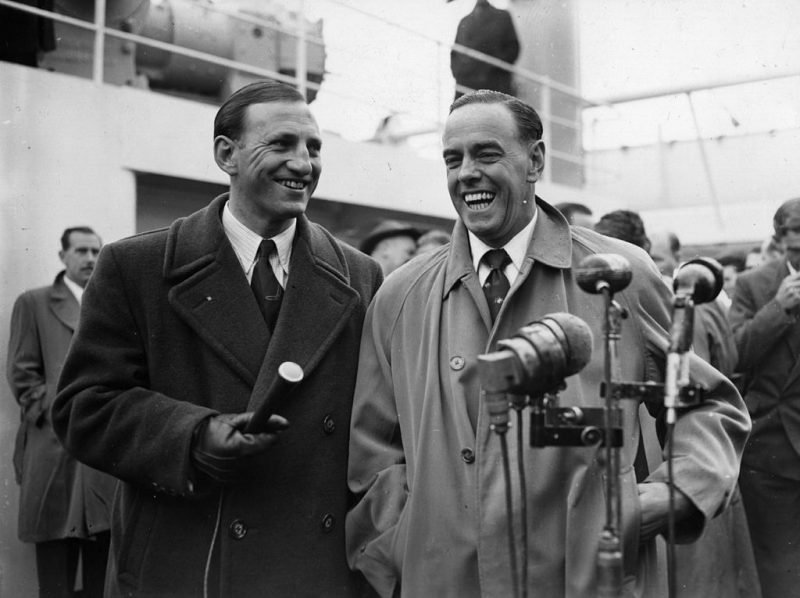 That changed after a pep-talk from Hassett himself at a New Year’s Eve party, when he hinted that Johnson could be captain of Australia if only he put his mind to it. By the end of the year, the prophecy had come true. Johnson can hardly be remembered as a great Test captain: of his nine Ashes Tests in charge, in 1954/55 and 1956, Australia lost four and won just two. But his finest hour came in between those series when he led their first Test tour of the Caribbean, only 12 months after a notably bad-tempered visit by England.

They won not merely the series but the people’s hearts, with a charm offensive that led to much favourable comparison with the stand-offish English: “Ian did the best PR job of any captain I’ve ever seen,” said Alan Davidson. But Johnson’s own form was patchy, and this worsened the dressing-room tensions: some malcontents called him “myxomatosis” because he only bowled when the rabbits were in, and he was seen by others as dictatorial. The 1956 tour was unwinnable, and impossible to survive. After an epilogue in the subcontinent on the way home had mixed results, he retired.

Related Story: Quiz! How well do you remember the 2013 Ashes?

The following year Johnson began the second half of his career. He was chosen ahead of 44 other candidates to be secretary of the Melbourne Cricket Club. This really did cement his place in the Australian establishment, but he was a progressive administrator: the MCG remained the beating heart of Australian sport, and Johnson was there, mostly smiling, through 26 years of dramatic change.

For 56 years he was married to Lal, daughter of Roy Park, who played one Test for Australia. He had a knack for getting things right: on his South African tour in 1949/50 he wrote a series of pieces for the local paper, the Sunday Express. One touched on the racial question. “You’re living in something of a fool’s paradise,” he warned.