Pakistan’s explosive Test series victory against England in 1992 came with a talismanic performance from Wasim Akram. He was promptly named a Wisden Cricketer of the Year.

Whatever the controversy surrounding their methods – and this is detailed elsewhere in Wisden – there is no question that in 1992 Wasim Akram and Waqar Younis were the most successful cricketers in the world. Opening the bowling for Pakistan, they had a variety and aggression that made them as potent a pair as the game has seen.

In the Test series in England, Wasim took 21 wickets in four Tests. In the other tour matches he was even more devastating and finished with 82 first-class wickets in all at 16.21 each. He had already made his name as a batsman of sometimes astonishing power. In January 1993 he was suddenly appointed to succeed Javed Miandad as Pakistan’s captain, with Waqar as his deputy. Few cricketers were so obviously destined for the game’s aristocracy, but his elevation came even sooner than his admirers had expected. As captain he will be recognised more clearly and more widely as head of state than whichever general or politician holds the nominal office in Islamabad.

None of this was obvious in his boyhood. Wasim Akram was born in Lahore on June 3, 1966, to a moderately affluent middle-class family, in which his father was mostly concerned with his son’s happiness rather than his success. His mother was the more ambitious for him, but her thoughts hardly embraced professional sport.

They sent him to the fee-paying Cathedral School in Lahore, where all the lessons, other than Urdu, were conducted in English. In the tradition of the English public school, the Cathedral’s scholars were expected to play games. Wasim, dreaming of the feats of Zaheer Abbas, Asif Iqbal and Mushtaq Mohammad, needed no urging to play cricket.

At 12 he was opening the bowling and batting for the school team. At 15 he was captain, his whole life consumed by cricket, at school, in nets at home, in the garage with his brother, and in street games played with a tennis ball. These matches were played of an evening in the lanes of old Lahore. As many as 10 or more teams would compete in a tournament, each side contributing an entry fee, the eventual winners scooping the pool. 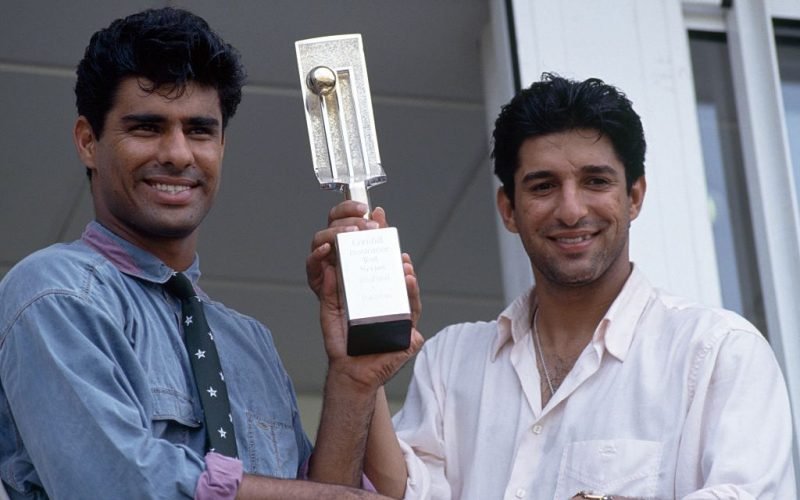 Wasim and Waqar starred in Pakistan’s series win in England in 1992, with 43 wickets between them

It was fast, intensely competitive, as much a test of eyesight, reactions and stamina as ability. Wasim was so outstanding that local clubs took notice. When he took four wickets for Ludhiana against Lahore Gymkhana, including those of Ramiz Raja and Intikhab, he won nomination to the talent camp, a summer examination of Lahore’s best 100 young players, promoted by the Pakistan Board.

He was then 18 and his big in-swing and formidable hitting attracted attention. In his class were Ramiz Raja, Mohsin Kamal and Ijaz Ahmed, and he won further nomination to the Pakistan Under-19 camp in Karachi. There the sight of this tall, lively left-armer offering so much promise delighted Pakistan’s former fast bowler, Khan Mohammad, who soon taught him to lift his arm in the delivery stride, adding pace.

By sheer chance Javed Miandad, seeking practice, took a turn in the Under-19 net. He was so impressed by the youngster’s ability to move the ball at speed, while retaining control, that he insisted Wasim be included in a squad of 14 for a three-day Patron’s XI match against the New Zealanders at Rawalpindi.

Wasim, again at Miandad’s insistence, displaced the better-known Tahir Naqqash in the final selection and fewer first-class debuts have been more impressive: 7-50 in the first innings, two more wickets in the second. His scalps included John Wright, Bruce Edgar and John Reid. In such circumstances a Pakistani newspaper’s description of Wasim as a sensation was restrained.

Wasim Akram making a Test century in Australia – a feat that eluded the likes of Shivnarine Chanderpaul, Allan Lamb, Nasser Hussain and John Wright, all of whom played at least 10 Tests in the country.pic.twitter.com/IK5YYMsuQg

He then made his international debut in a one-day match against New Zealand at Faisalabad and, only two months after his entry at Rawalpindi, he was chosen to tour New Zealand. According to Miandad, he did not even realise the Pakistan Board would pay him. In his second Test, at Dunedin, he took 10-128. It was early 1985, and he was 18 years old.

His reputation soon reached England and Lancashire began tracking him almost immediately. Advised by Imran Khan to seek experience of English conditions before Pakistan’s 1987 tour, he spent a summer with Burnopfield in the Durham League, where he remembers a tiny, freezing flat, wet grounds, and playing on in the rain. Wasim signed an unparalleled six-year contract for Lancashire, in secret, on the first night of the 1987 tour. He burst on English cricket the following summer with a maiden first-class century in his second Championship match, against Somerset, and a performance of Sobers-like proportions against Surrey at Southport. There he took 5-15 including a hat-trick, made a half-century in the first innings and then, with Lancashire struggling, scored 98 off 78 balls. The scores were level when he was last man out, caught on the boundary.

For some time Imran had been saying that Wasim was the world’s greatest all-rounder.

In conversation later that summer he emphasised the point made by so many overseas professionals: “You try to play too much first-class cricket. You sacrifice quality for quantity.” Wasim expressed himself much more happily in the one-day competitions where he became, probably, the most feared opponent, able to turn a one-day game, with bat or ball, in two or three overs.

Championship cricket, on Old Trafford’s improving square, he found to be frustrating, culminating in an outburst in 1991 that led to an umpires’ report and a £1,000 fine by the county club. For weeks there were rumours, as Wasim struggled with a recurring groin strain, that he would not return. The situation was resolved by a new contract that may have made Wasim the world’s best-paid cricketer until, that is, Surrey came to settle with Waqar.

Meanwhile, his reputation as a Test cricketer was growing all the time. At Adelaide in 1989/90, he had a partnership with Imran Khan that saved Pakistan from what looked like imminent defeat and took them to the edge of victory. Wasim’s driving to the long, straight boundary of the Adelaide Oval was as powerful as anything ever seen on the ground. Imran was the junior partner. For some time Imran had been saying that Wasim was the world’s greatest all-rounder. Here was the evidence.

After 1992, it is possible to say more than that. He stands at the moment as perhaps the fastest and most destructive left-arm bowler the world has seen.