It was on his second tour of England in 1996 that Mushtaq Ahmed announced himself as a world-class leg spinner. In 1997, he was a Wisden Cricketer of the Year.

By taking 45 wickets in six Tests for Pakistan between November 1995 and August 1996, Mushtaq Ahmed confirmed his status as the final member – alongside Shane Warne and Anil Kumble – of a glittering triumvirate of wrist-spinners who adorn the modern game. Mushtaq is the most enchanting of the lot.

Warne’s success stems from prodigious spin and accuracy, Kumble’s from prodigious bounce and accuracy; like superbly schooled sheepdogs, both pen batsmen down before picking them off with clinical ruthlessness. Mushtaq prefers to lure batsmen to their end in the traditional manner. He is the arch-deceiver, possessing every nefarious variation in the wrist-spinner’s armoury. Unlike the others, he has a googly which is indecipherable to most international batsmen. His instincts are to outwit opponents rather than wear them down.

He is the most impetuous of the trio, which is often betrayed by the frenzied nature of his appealing. He cannot hide his exasperation when a batsman thrusts his front leg down the pitch in the pretence of playing a shot without being penalised by umpires, who are often equally bamboozled by his spin.

“Sometimes,” he says, “I tell the umpire a straight one is coming, so watch out” – a ploy that has yet to meet with conspicuous success. He has usually been the most expensive of the three in his headlong pursuit of wickets rather than maidens. Indeed, at Brisbane in November 1995, this profligacy led to his omission from the Test team.

Sometimes his variations were too pronounced and too frequent. When he was at Somerset in 1995, many opponents, following the advice of Martin Crowe, started to play him as an off-spinner because he impatiently bowled so many googlies. For a while his county colleagues nicknamed him Tauseef after the Pakistani off-spinner of the 1980s. In Australia he talked to Warne, more about the mental approach to wrist-spinning than the mechanics. Warne stressed the benefits of restricting batsmen and of preying on their frustration. Mushtaq took note.

Recalled for the two Tests in Hobart and Sydney, he gathered 18 wickets; there were ten more at Christchurch against New Zealand. But his maturity was confirmed in the three-Test series against England in the summer of 1996. He spun Pakistan to victory on the final afternoons at Lord’s and The Oval. His innate competitiveness was now allied to patience, and this became clear to all at Lord’s. Having bowled 48 overs since taking a wicket in England’s first innings, he suddenly mesmerised the batsmen, conjuring figures of five for 11 from 57 balls between lunch and tea.

On the last day at The Oval, he bowled 30 overs unchanged from the Vauxhall End to take six for 67, which he regards as his finest Test spell yet. He recognised that Mike Atherton was the key English batsman, and on both final days he dismissed him when bowling – Warne-style – from around the wicket. Once Atherton was gone, the rest of the English order was nonplussed as Mushtaq whirled out an assortment of unrecognisable deliveries. In the glow of victory, his grateful captain, Wasim Akram, proclaimed that Mushtaq was better than Warne. 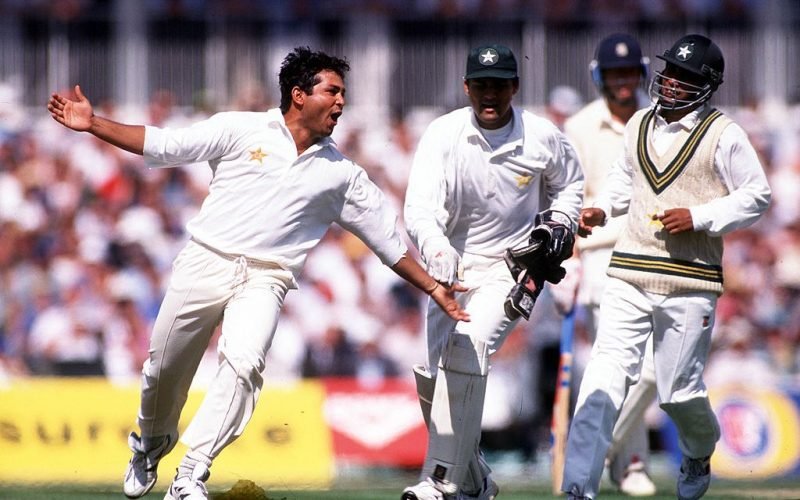 His conversations with Warne had been productive, but his first role model was inevitably Abdul Qadir, Pakistan’s impish leg-spinner of the 1980s. As a nine-year-old in Sahiwal, where Mushtaq Ahmed was born on June 28, 1970, he would bounce up to the wicket aping Qadir and he soon discovered that he could torment much larger school friends with his looping, teasing tweakers. He first haunted English batsmen at the age of 17 during the notorious 1987/88 tour by Mike Gatting’s side, taking six for 81 for the Punjab Chief Minister’s XI in his hometown.

In January 1990, he flew out to Australia to replace Abdul Qadir and made his Test debut in Adelaide. However, his first international excursion was notable for the wrong reasons; in the next match, a state game in Melbourne, he was warned for running on the pitch by umpire Robin Bailhache, who eventually instructed the captain for the day, Ramiz Raja, to remove Mushtaq from the attack. The Pakistan team refused to accept this ruling and walked off the ground; play could be resumed only after an uneasy compromise had been hatched.

The 1992 World Cup in Australia and New Zealand prompted happier memories. Pakistan won the tournament and Mushtaq’s bag of 16 wickets was a vital contribution. In the final against England he took three crucial wickets – Hick, who was completely baffled by that googly, Gooch and Reeve. Curiously, at this stage of his career Mushtaq, despite being a wrist-spinner, was more effective – and more secure – in Pakistan’s one-day team.

During the victorious 1992 tour of England, during which he captured 15 Test wickets, he was signed up by Somerset. He quickly proved to be an inspired recruit. In two and a half seasons he took 217 Championship wickets. He became as popular as any of his illustrious predecessors at Taunton – in the dressing-room, the committee rooms, the kitchens and the members’ stand. Cricket chairman Brian Rose recalls: “The whole process of signing him took five minutes – he was so keen to come. He has been the model overseas player; he wins matches for the club and adds members. At Taunton, he is happy to bowl all day and he usually does; in the absence of Waqar Younis he is even allowed the luxury of bowling at the tail.”

But a 40-over spell from Mushtaq is never dull; every over is an adventure. One of his ambitions is to take 100 wickets in a season for Somerset – his best haul so far is 92. He is also the most entertaining of tailenders, who once won a Test with his bat, when he added 57 with Inzamam-ul-Haq for the last wicket to defeat Australia in Karachi in 1994-95. His batting, like his motoring, should be keenly observed; it is erratic and potentially destructive.

Mushtaq’s Test career continued until 2003; in 52 matches he took 185 wickets at 32.97. In that year he joined his second county, Sussex, and became one of the most successful bowlers in the modern history of the Championship.