John Reid was a fine all-rounder and a tough captain of a struggling New Zealand side. He was named a Wisden Cricketer of the Year in 1959.

There is a paddock beside a house in the Hutt Valley in New Zealand where a grandfather used to take his grandson with a bat and teach him to hit the ball back to him from various angles. The budding cricketer was John Richard Reid, the New Zealand captain, who was born at Auckland on June 3, 1928. Soon his parents moved to Wellington and later he went to Waiwhetu and Hutt Valley High Schools. HE Isherwood was the grandfather who instilled this love of cricket into John Reid and taught him to place the ball.

Another person who encouraged him was CA Browning, a knowledgeable cricketer himself and headmaster of the primary school where cricket and rugby football were the passions of most of the boys. Reid was good enough to play in Wellington representative schools sides at both games and as soon as he went to the Hutt Valley High School he had the unusual experience of gaining a place in the first team when only 14.

His love of sport, which also included athletics and swimming, brought about a decline in health, for he was playing cricket in the summer every day from 3.30 to 5.00 and then taking part in men’s club matches in the evenings. Rheumatic fever compelled a halt, but he was soon in the field again and in his last year at school, 1946, he was Head Prefect and Captain of Cricket.

Returning to Rugby, he dislocated his right shoulder. This prevented him bowling, but, always adaptable, he turned to wicketkeeping and was chosen to represent Wellington in the Brabin Shield, a competition for players under 21 – in fact a junior Plunket Shield.

Too much sport brought about a second attack of rheumatic fever and this time he had to spend four months in hospital. It finished his rugby and left his heart weak in two places, for he found his wife – she was first nurse at the hospital. By 1947 he was perfectly fit again and made his debut in first-class cricket for Wellington, for whom he made his highest score, 283 against Otago at Basin Reserve, 1951/52. Reid, whose present occupation is with an oil company, now plays for Otago, for whom he achieved his best bowling performance, 7-20 against Central Districts at Dunedin, 1956/57. 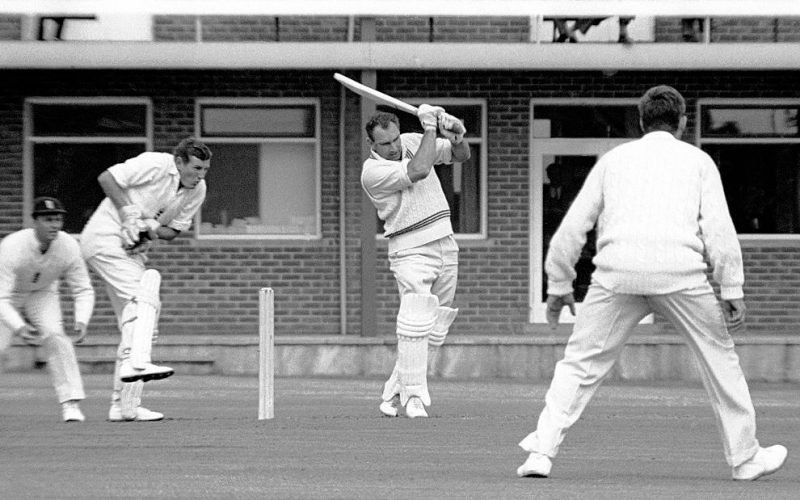 He was only 20 when chosen to tour England with WA Hadlee’s side in 1949 and he soon realised, by watching more experienced men, that he had much to learn, particularly in batting. In those days Reid was mainly a forward player, but as Wisden said at the time, he learned rapidly, improving his batting by adding solidity to his scoring strokes. He was the best of a superb fielding side, showed himself a good deputy wicketkeeper in the last Test and could deliver as fast a ball as anyone in English cricket at that period.

In 1952, Reid accepted a professional engagement with Heywood, in the Central Lancashire League. He took this post for two reasons. First, he desired to take his wife to England while they were both young, and secondly he thought it would be good for his cricket. He spent three seasons with Heywood, 1952-54, and achieved some phenomenal results considering each season is confined to 20 Saturday afternoons. In 1952 he made 982 runs and took 114 wickets; in 1953 his figures were 860 runs, 100 wickets; 1954, 1,300 runs, 100 wickets.

A keen student of the game, Reid appreciates the problems which confront cricket in his country.

Moreover, he tightened his bowling considerably. He appreciated that the fast outswinger is not profitable in those circles, because only rarely do the slips hold the catches. Consequently, Reid turned to off-cutters and learned to pitch an immaculate length. This form of bowling made him even more useful to New Zealand during their tours of South Africa 1953/54, and India and Pakistan 1955/56.

In South Africa, Reid emphasised his brilliance by becoming the only cricketer who has scored 1,000 runs and taken 50 wickets there in the same season; and yet he discovered he still had something to learn. His method of playing forward on fast pitches to tall pace bowlers like Adcock, who persistently pitched short of a length, was useless. Watching Eric Rowan, he appreciated the wisdom of playing off the back foot. Since then, Reid has studied films of Sir Donald Bradman, who never went forward unless determined to drive. 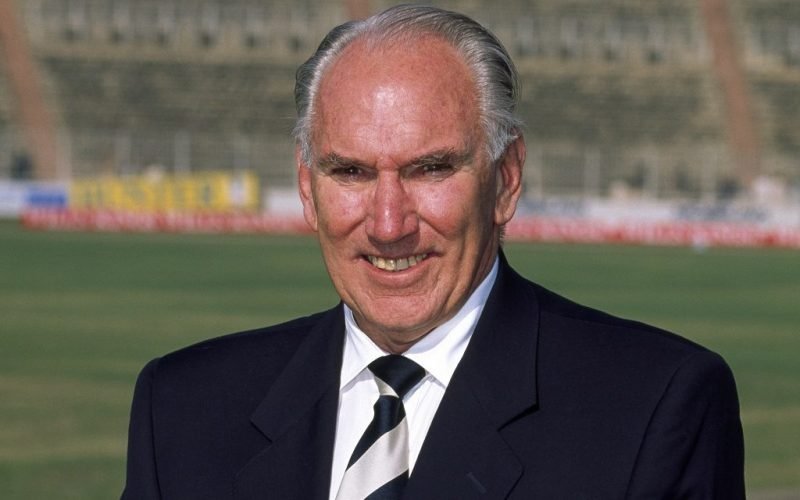 Between October 1955 and March 1956, New Zealand played 12 Test matches, three in Pakistan, five in India and four, when they returned home, against the West Indies. It would not be an exaggeration to say that Reid was the mainstay of the team and it came as no surprise when in February, in the second match against West Indies at Christchurch, he was given the captaincy.

Few captains have undertaken such an unenviable task. In 26 years of Test cricket, victory had always eluded New Zealand, but at his third attempt as leader Reid broke the ice in the final Test of the series at Eden Park, Auckland. It was the 45th Test undertaken by his country and Reid, by his masterly batting on the opening day after West Indies had gained the initiative, made top score in the match, 84, and eventually saw his men triumph by 190 runs.

A powerful driver, sure hooker and adept with the cut, Reid does not like to waste at the crease. A natural forcing player, he has constantly faced the job of trying to redeem lost causes. In the recent Test matches in England, he generally took guard when Lock and Laker were in command. If he decided to pursue a cautious line, he knew there was little chance of his team disturbing the two Surrey spinners. So he endeavoured to hit his side out of trouble; but he fared no better than his colleagues until his last innings at The Oval when his delightful not out 51 removed all fear of New Zealand going down for the fifth time in the same series.

A keen student of the game, Reid appreciates the problems which confront cricket in his country. At the age of 30, he still has plenty of years of active cricket in front of him and his aim will be to encourage all young players.