Jim Laker excelled for Surrey and England in 1951 and was named a Wisden Cricketer of the year the following spring. In 1956, he achieved a feat that has since been beyond anyone’s reach.

Jim Laker will always be remembered for his bowling in the Test match at Old Trafford in 1956, when he took 19 Australian wickets for 90, nine for 37 in the first innings and ten for 53 in the second. No other bowler has taken more than 17 wickets in a first-class match, let alone in a Test match. The feat is unique and, rash though it may seem to say, may well remain so.

Ten wickets in an innings, more than any other achievement in cricket, must contain a large element of luck: however well a man bowls, the odds must always be that his partner will pick up a wicket. In this case, these odds were heavier than usual because Lock at the other end was, on such a wicket, as great a spinner as Laker and bowled superbly. What turned the scale was that Laker was bowling off-breaks whereas Lock relied on the left-armer’s natural leg-break, and the Australians at that period were wholly inexperienced in playing off-breaks, especially on a wicket which, heavily marled and almost devoid of grass, might have been designed for an off-spinner.

Since the days of Howell and Trumble at the turn of the century, Australian wickets had become so unresponsive to finger-spin that the off-break had virtually disappeared and sides relied on pace and wrist-spin – Gregory and McDonald, Lindwall, Miller and Johnston or again Hordern, Mailey, Grimmett and O’Reilly. Against these two types of bowler the essential is to get into line, so that the bat can swing straight down the path of the ball. But the batsman who follows this principle against vicious off-spin soon finds himself reduced to an ugly jab right across the line, and the result is always likely to be an lbw or a catch to one of the close-fielders. Moreover, so accurate was Laker that these fielders could stand very close indeed.

In any case this was the weakest Australian batting side for more than 60 years, with the possible exception of 1912 when four of their essential batsmen refused to come. In particular, they lacked a great attacking genius like Trumper, MacArtney, or Bradman who would refuse to be dictated to and who might have disrupted the entire plan.
Indeed, the Australians had had a foretaste earlier in the season of what might happen when, for Surrey at The Oval, Laker had taken ten for 88 in the first innings, the only instance of a bowler performing the feat twice in one season. Altogether, that summer he played seven times against the Australians and took 63 wickets for 10 runs each.

Born at Frizinghall, near Bradford, Laker was brought up in Yorkshire and in his schooldays was a batsman and a fast bowler. It was BB Wilson who, in indoor nets early in the war, suggested that he should change to off-spin and, while serving in the Middle East and having the chance of playing Army cricket with a number of distinguished players, he turned the advice to good account. 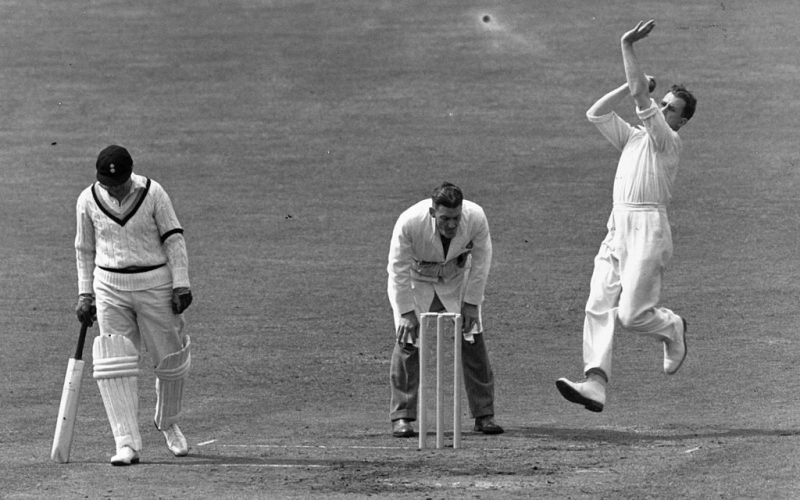 Jim Laker bowling against Derby at The Oval in 1949

Before being demobilised he was billeted at Catford and joined the cricket club, whose president then was Andrew Kempton, who for years did so much for young Surrey cricketers. Kempton recommended him to The Oval and, after playing twice for Surrey in 1946 against the Combined Services, he was taken on the county staff, the Surrey authorities having first made sure that Yorkshire were not interested.

He soon made his place secure in the Surrey side in 1947 and headed their bowling averages. At the end of the season, he was picked for the largely experimental MCC side which GO Allen was taking to the West Indies and was one of the few successes among the untried players. In the first innings of the first Test he took 7-103 (six of them on the second morning for 25) and, though handicapped later by strained stomach muscles, he came out top of the averages. 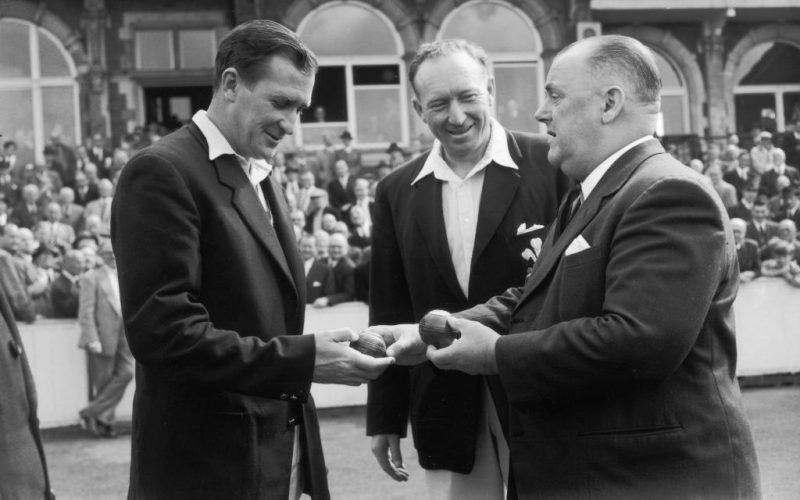 However, in England in 1948 he suffered a severe setback. The Australian side that year was, at a modest computation, one of the strongest batting sides in the history of cricket, and nothing in Laker’s limited experience had prepared him for such an ordeal. On his second appearance against them for MCC at Lord’s, he was hit for nine sixes on the second morning. Nonetheless, he was chosen for the first Test and created a sensation by being easily the top scorer in the first innings with 63 made in 90 minutes: the total was 165 and he and Bedser added 89 for the ninth wicket. He also took three early wickets, Morris, Barnes and Miller, but after that he was ineffective, as he was too in the second Test.

Dropped for the third Test, he was recalled for the fourth, in which Australia, set to get 404 in 344 minutes, got them within a quarter of an hour of time. The pitch was taking spin, the ball was lifting – a few years later, Laker would have been in his element. Unfortunately, he failed to keep a length: moreover, although there was a spot just where a slow left-armer or leg-spinner could have used it, it was no help to him. Altogether that season his 14 wickets against the Australians cost him 59.35 runs each, and it was probably this, and especially the treatment he received at Lord’s, which led the selectors to feel that, however successful he might be in county cricket, he was not really a Test-match bowler.

He and Lock proved themselves one of the greatest combinations on a turning wicket in cricket history.

Yet in the coming years, in the immensely strong Surrey sides which won the Championship season after season, he and Lock proved themselves one of the greatest combinations on a turning wicket in cricket history, comparable with Peel and Briggs for England, Blythe and Woolley for Kent or Parker and Goddard for Gloucestershire. Laker may well have thought that, when he took 8-2 for England against the Rest at Bradford in 1950, his place in the England side was secure, but in the next six years he was often left out in England and went on only one tour abroad, to the West Indies, where it has to be admitted that he was terribly expensive.

However, he did have his successes in England. It was, for instance, undoubtedly he who won the final Test against South Africa in 1951 with four for 64 and 6-55, and after taking more than 100 wickets for Surrey alone that season he was included among the Five Cricketers of the Year in the 1952 Wisden. 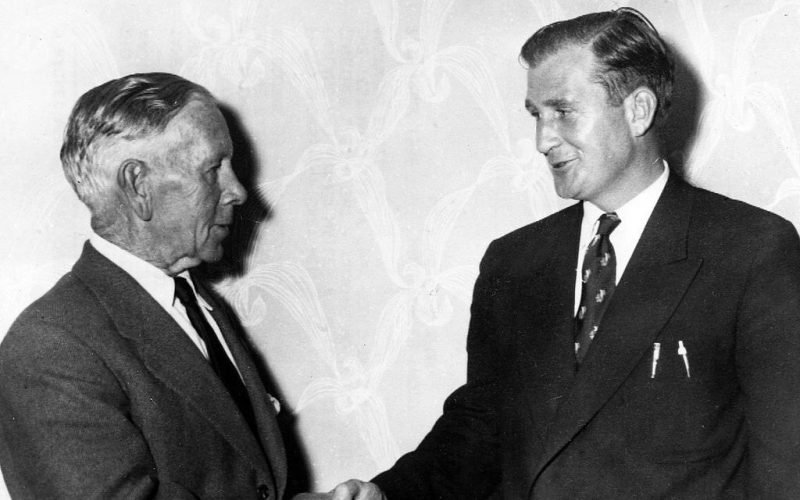 Laker pictured with Arthur Mailey in 1956. The former too had collected a nine-wicket haul in a Test match at the MCG in 1921

After 1956, the attitude of the selectors naturally changed. In 1957 Laker played in four Tests against West Indies, missing one through illness, and again in 1958 in four of the five against New Zealand. In 1956/57 he was in one of the MCC sides in South Africa, where he met with fair success, and at last in 1958/59 was picked for a tour of Australia, where he topped the bowling averages both in the Tests and in all first-class matches. But he was by now feeling the strain and opted out of the New Zealand part of the tour which followed.

In England in 1959 he was not the bowler he had been: his 78 wickets cost 24.61 runs each and he was much handicapped by an arthritic finger. At the end of the season, he retired from the Surrey side, having taken for them, over 13 years, 1,395 wickets at 17.37 in 309 matches: 11 times he had more than 100 wickets in a season. However, in 1962 he was persuaded by his friend, Trevor Bailey, to turn out for Essex, and for three years he appeared for them in 30 matches as an amateur. He was still capable of discomfiting the best players.

In 1960 he had published a book, Over to Me, which gave so much offence to the authorities at Lord’s and The Oval that they withdrew his honorary membership of MCC and Surrey, although these were restored some years later, and at the time of his death he was chairman of Surrey’s cricket committee. Meanwhile, he had found himself a new career as a television cricket commentator: he had, of course, a deep knowledge of his subject, he was admirably clear and, though outspoken, never unfair.