Graham Gooch had to work hard to forge a top-level career, but after a brilliant summer, he was named a Wisden Cricketer of the Year in 1980.

It is as much a tribute to his temperament as to his undoubted skills with the bat that Graham Alan Gooch has blossomed into one of the most exciting stroke-players in the game today – a point he so ably demonstrated to a packed Lord’s ground and millions of television viewers last summer when his magnificent 120 helped Essex carry off the Benson and Hedges Cup against Surrey. That was just one of several fine innings which Gooch, born at Leytonstone on July 23, 1953, unleashed to confirm his arrival as a batsman of the highest class.

It is fair to say that since making his county debut in 1973, Gooch has had to endure immense pressures on his way to the top; pressure that would have got the better of players not gifted with his fierce determination to succeed. At a time when fans and media alike were demanding new blood at Test level, Gooch, following an impressive start to the season and with only a handful of first-class games behind him, was – so to speak – thrown to the lions in 1975. He was selected for his Test debut against an Australian side containing the fearsome new-ball attack of Lillee and Thomson. There was to be no fairytale baptism on the international scene. Far from it. Gooch collected a dreaded pair at Edgbaston and, after one more Test, was cast aside.

That must have been a traumatic experience, but it merely hardened his resolve to make a success of a career he had set his heart on since his early days. For the next three years, he went quietly about the business of serving his apprenticeship at county level before being called up as opener for the second Test against Pakistan at Lord’s in 1978. Failure to grasp that chance would have had one doubting his ability to make the grade at the highest level. His answer was a fighting half-century to help England overcome the shock of losing their first two wickets with only 19 runs on the board. Gooch thus proved he had learnt much in the intervening years. But shortly afterwards he was under pressure to retain his place again.

A duck in the first innings of the opening Test against New Zealand at The Oval coincided with the news that Boycott was set to return to the side. With Brearley assured of his place as captain, it seemed Gooch would be the one to step aside to make room for Boycott. However, 91 not out in the second innings ensured Gooch’s retention, and he responded with a half-century when opening with Boycott, the selectors having little choice but to drop Brearley down the order.

Those efforts virtually clinched his selection for the 1978/79 tour of Australia, where he faced another crisis. He went into the sixth and final Test at Sydney having failed to reach fifty in the previous five and was fully aware that he could be banished to the sidelines once more if he did not produce an innings of quality. He obliged with a swashbuckling 74 to point the way to a rewarding and vastly entertaining season on the home front last year. 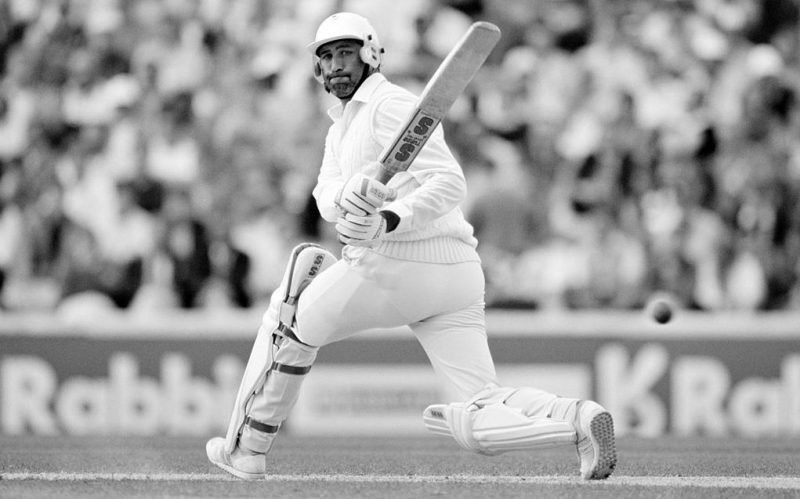 Graham Gooch was England’s top run-scorer in Tests, with 8900 runs from 118 games, until Alastair Cook went past him in May 2015

Gooch had spectators’ adrenalin flowing with explosive half-centuries against Australia and New Zealand in the Prudential Cup, innings which earned him the man-of-the-match award, and he twice came close to centuries in the series against India, failing by 17 at Edgbaston and scoring 79 at The Oval.

It was his masterpiece at Lord’s against Surrey which lifted him above the ranks of the ordinary; which convinced everyone of his star status. With a mixture of frightening power and controlled fury, he not so much dictated to the bowlers as destroyed them. His 120 arrived from 140 deliveries and contained three huge sixes laced with eleven boundaries, many of them hit with lightning speed through the mid-wicket area.

Those who witnessed it will treasure the innings for a long time to come, and it set the seal on a remarkable season’s work in the Benson and Hedges Cup. In seven innings, he totalled just under 600 runs. Apart from his gem at Lord’s, he scored 133 against the Combined Universities, sharing in a competition first-wicket record of 223 with Alan Lilley, and butchered Warwickshire for 138 in the quarter-finals.

“I found myself down at No.11 and didn’t get a bat. I remember feeling more than a little peeved at the time”

Gooch’s love of cricket was fostered by his father Alf, whom he used to watch as a youngster playing for East Ham Corinthians. “He and Essex coach Bill Morris have exerted the biggest influence upon my career,” he says. “They’ve given me all the help and encouragement possible.” While a pupil at Norlington Junior High School, Gooch took his first steps towards stardom, joining the much-respected Ilford club and working his way up to the first team.

In those days, Gooch had visions of becoming a wicketkeeper-batsman – but was hardly used in that role when invited to make his debut for Essex Second XI against Northamptonshire in 1969. “I found myself down at No.11 and didn’t get a bat. I remember feeling more than a little peeved at the time,” he recalls.

He was still attending school then, and that year toured East Africa with London Schools. In 1971, he appeared twice for Essex II and the following year was selected for the England Young Cricketers’ tour to the West Indies. He then acted as reserve wicketkeeper to Andy Stovold, now with Gloucestershire, and it seemed distinctly possible that he would succeed Brian Taylor behind the stumps. However, Gooch was to discard such an ambition and switched to bowling medium pace. In 1973, in addition to scoring 265 runs, he captured 34 wickets as Essex won the Second XI championship for the first time.

Graham Gooch scored 67,057 runs in first-class and List A cricket combined, more than any other player in the history of the game.

Who do you think is second and third on the list? pic.twitter.com/1x0EwlLKCf

That same year he made his Championship debut, against Northamptonshire at Westcliff, scoring 18 in his only innings. If that wasn’t an eventful baptism, his next first-class match, against Gloucestershire the following summer, proved less so. Then he suffered the ignominy of a pair. Yet it was not long before he started underlining his potential and the faith placed in him. Later the same month he hit a sparkling 94 against Lancashire at Old Trafford and went on to finish the season with 637 Championship runs, including his first century, against Leicestershire.

In those days, and in the next three seasons, Gooch batted around No.5. In that position, he often found himself coming in with only a few of the 100 overs remaining and would repeatedly become a victim of his own impetuosity in his desire to provide additional bonus points. His motives were praiseworthy, but they hardly served to get the best out of him.

The turning point, he admits, came when he was entrusted with opening the innings in 1978. The extra responsibility served to inject extra discipline into his game – and confidence began to flow. Proof of that came quickly when, at the start of the season, he hit successive centuries off both Kent and Northamptonshire – innings which were to lead to his Test recall.

Somewhat ironically, his stature as a Test batsman has grown since dropping down to No.3 or four for England. But whatever role he is asked to fill at future county or international level, Gooch has the passion and promise to suggest we shall hear a lot more of his name in the years ahead. Those of us who appreciate exciting and entertaining cricket will be grateful for that.

From hesitant beginnings in Test cricket, Graham Gooch went on to become one of England’s most prolific batsmen, scoring 8,900 runs at 49.23 in 118 matches. In all cricket, he scored a world record 67,057 runs.