Gordon Greenidge emerged from a torrid tour of Australia to blossom against England in the hot summer of 1976. He was named a Wisden Cricketer of the Year the following spring.

There were understandably mixed reactions in certain parts of England during the summer of 1976 to the batting achievements of the West Indian opener, Cuthbert Gordon Greenidge. On the one hand, he was repeatedly plundering English bowling; on the other, even though he was a native of Barbados, he was a product of a Berkshire school and he played most of his first-class cricket for Hampshire.

Greenidge is one of a generation of young West Indians whose affiliations are divided between the country of their birth and the country of their adoption – or rather that of their parents. Britain’s Olympic team is liberally sprinkled with athletes who were born in the West Indies but raised and trained in Britain. Strangely, Greenidge is the only cricketer in this category to have reached Test standard.

Born in Barbados on May 1, 1951, he spent his first 14 years of his life on an island where cricket is followed with a zeal unsurpassed anywhere else. There can be no doubt that these formative years in such an atmosphere provided the groundwork for his love and approach to the game.

He was born just a year after the West Indies’ triumphant series in England dominated by the Three Ws – Walcott, Weekes and Worrell – and Ramadhin and Valentine. His early schooldays at Black Bess School and St Peter’s Boys’ were spent while fellow Barbadians such as Sobers, Hall, Hunte, Nurse and Griffith were helping to emphasise West Indian Test strength under the captaincy of Sir Frank Worrell.

Gordon Greenidge, therefore, could hardly have been considered a clueless novice about the game when he entered Sutton Secondary School in Reading, his parents’ new home in 1965. It was not long before he was in the school team as a middle-order batsman, quickly attracting the attention of those keen to find new talent. 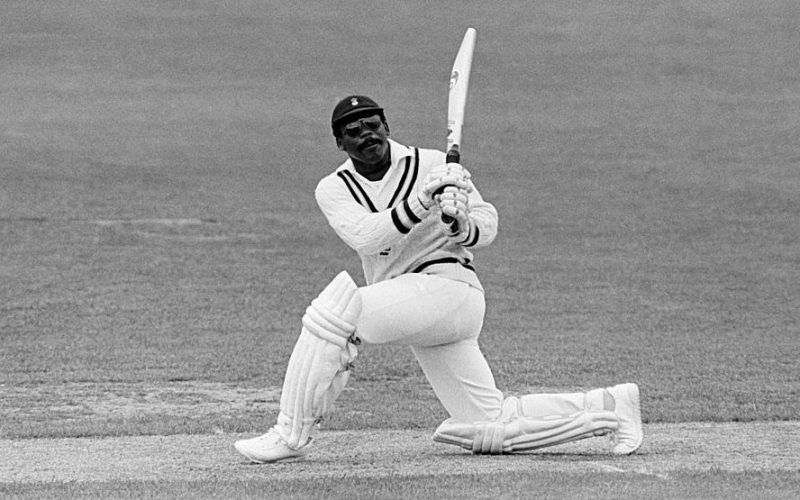 He was chosen for the Berkshire Bantams, the equivalent of the county’s youth team, and appeared for the South of England Schoolboys against the North and Midlands in 1967. Reports of an innings of 135 not out for the Bantams against Wiltshire youth soon made the rounds on the cricket bush telegraph and the result was approaches from Hampshire and Warwickshire offering trials.

The man acting on Hampshire’s behalf was John Arlott, the cricket writer and broadcaster, and whether it was his persuasive tongue or the proximity of Southampton to Reading (or a combination of the two), Hampshire was the county Greenidge chose. He was signed in 1968, playing with moderate success in the Second Eleven and with Deanery Club in Southampton before graduating to the first team two seasons later. 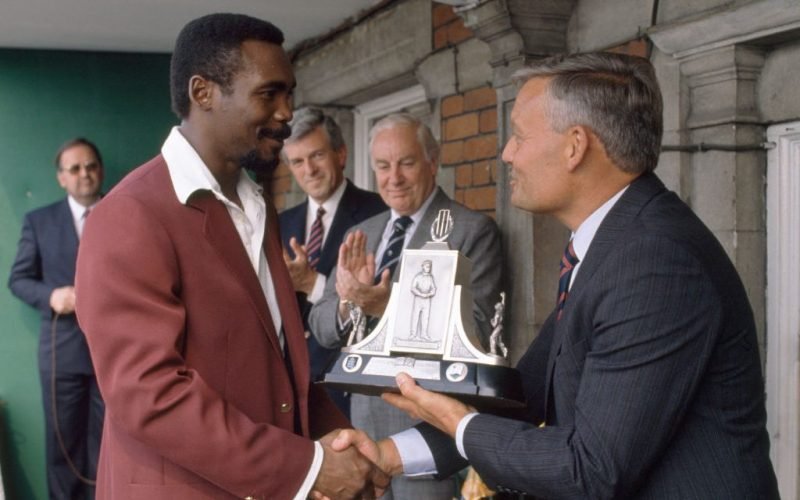 Greenidge recalls that he was, in his own words, “a lousy fielder” at the start. He was, he admits, only interested in batting, but gradually realised his future in the game depended upon more than just scoring runs. His first chore, then, was to overcome what he calls “laziness” and he worked on it so hard that he would be pounding the streets of Southampton past midnight in an effort to get fitter – until a police car stopped him on one occasion and put him in some bother to explain his movements! That kind of dedication has paid dividends, for Greenidge must surely rank, at the present time, as one of the game’s best fielders anywhere, particularly in the slips.

It was perhaps, a wise policy for Hampshire not to push him too quickly into their first team. When they did, in 1970, he played only seven matches, but did enough to move Wisden to report that he “made a major breakthrough”. They were prophetic words, for in every season since, Greenidge has comfortably passed 1,000 runs – either for the county or, in 1976, for the West Indies touring team. 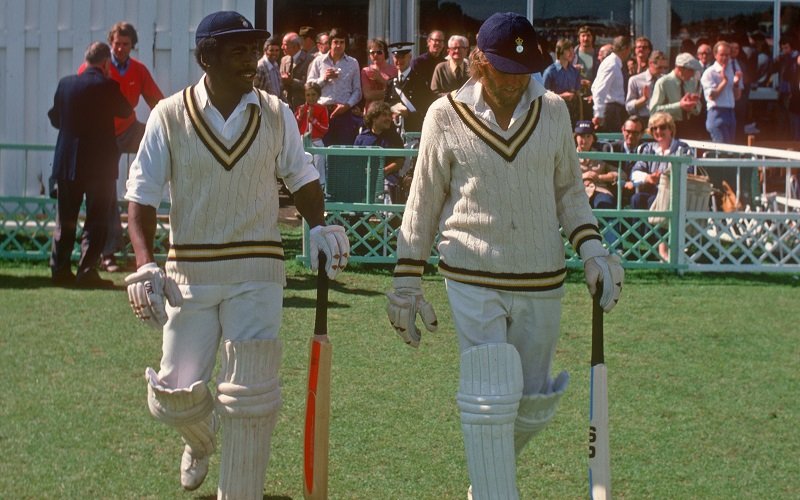 There can be no gainsaying the benefit he has enjoyed through opening the innings with as brilliant a partner as Barry Richards, the South African who has been with Hampshire since 1968. The first time they opened together at Southampton, their stand was worth 201 and, ever since, they have comprised a formidable pair.

It was not long before Greenidge was being recognised as a player with definite Test potential and there was natural speculation about whether he would make himself available for England (for whom he was qualified) or whether he would seek to play for his native West Indies. He decided on the latter and returned home after the 1972 English summer “to see what cricket was like back home and to try my luck”. 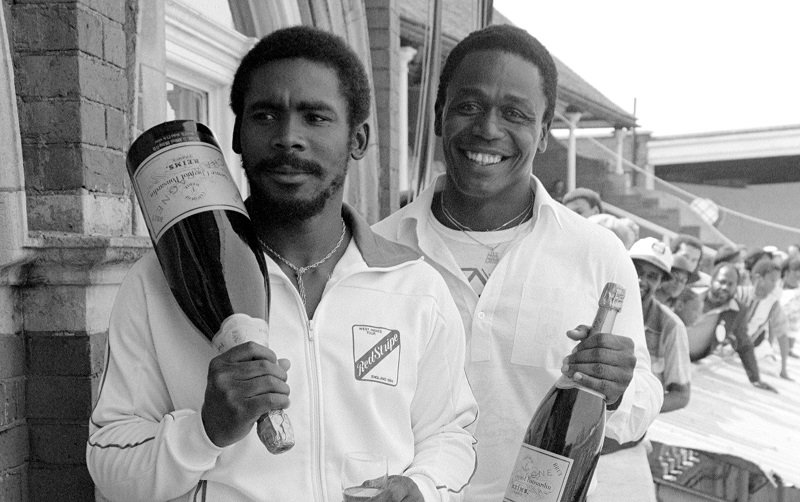 His reputation preceded him but, having been away for eight years, he was as unaccustomed to the conditions as any English player would have been. He took some time to settle down in the high standard Barbadian club cricket although there was no question about him making the island team for the 1973 Shell Shield. In the first season, he averaged 38 per innings, in the second 41 and was then selected for a West Indies team for the first time – for the long and arduous tour of India, Sri Lanka and Pakistan in 1974/75.

There were many who were skeptical as to his ability to succeed against an Indian attack dominated by spinners of the highest quality for although he had demonstrated his class against pace, he appeared susceptible to spin. Those doubts were erased in his very first Test match, against India in Bangalore, where he scored 93 (run out) and 107 on a rain-affected pitch favourable to the bowlers. While he produced nothing spectacular for the rest of the series and while a back injury forced him to miss the Tests against Pakistan, he had gained from the experience and had established himself as a Test player.

His biggest challenge to date was his confrontation with the Australian fast bowlers on their own grounds in the 1975/76 series, a series which received grandiose publicity but which proved disastrous for the West Indies – and for Greenidge.

It had been widely expected that his penchant for hooking and cutting– and that of the other opener – Roy Fredericks – would provide an exciting match for the speed of Lillee and Thompson. Instead, Greenidge could not come to terms with the additional pace of the bowling and the extra bounce and zip of the pitches and was dismissed for 0, 0, 3 and 8 in the only two Tests he played.

Although deeply disappointed at the time, Greenidge believes those failures were probably a good thing. “It was really the first time I had failed so miserably and it made me realise that batting in Test cricket was more than just crashing a ball about,” he says. “I knew from that point I had to tighten my game”.

His exploits during the summer of 1976 were evidence of this profitable change in his approach. He still despatched the bad ball with all the old gusto and his attacking shots were still executed with the tremendous power generated by his huge biceps and forearms. Yet, there was a noticeable improvement in his selection of the correct ball to hit and in his appreciation of a particular situation.

There have been few more dedicated innings played for the West Indies than his 134 out of 211 in the first innings of the Old Trafford Test on a pitch of uneven bounce and fashioned out of the ruins of a start of 26 for four. In that match, he completed a century in the second innings as well, making him only the second West Indian to pass three figures in both innings of a Test in England. The other was the great George Headley, who did it twice.

There will, undoubtedly, be other disappointments in the years ahead but for Cuthbert Gordon Greenidge, raised in Barbados, schooled in Berkshire and discovered by Hampshire, the future is bright indeed.