In a record-breaking season with Northamptonshire in 1933, Fred Bakewell celebrated his comeback to the England Test side with a hundred against the West Indies at The Oval. He was named a Wisden Cricketer of the Year the following spring.

Alfred Harry Bakewell of Northamptonshire, was born at Walsall, Staffordshire, on November 2nd, 1908, and before going, while still a boy, to Northampton, he played cricket at St. John’s School, Cowley, near Oxford. There, the first team boys, among who was Bakewell, received special coaching under the scheme organised by Mr. JRF Turner. Thanks to this he enjoyed the opportunity of net practice on one of the Oxford University College grounds when the majority of them were thrown open to assist in the development of young and promising players. In this way Bakewell was like Jack Hobbs, who on a college ground at Cambridge first had more or less regular batting.

So far, Bakewell devoted his attention chiefly to the execution of scoring strokes, and it was not until he went to Northampton that he attracted the attention of a gentleman from whom he received many valuable lessons in the no less important defensive side of batting. He came under the notice of the Northamptonshire County Cricket Club authorities when he took part in 1928 in a match against a Club and Ground eleven. A trial of Bakewell at the nets quickly convinced those who watched him that this young cricketer possessed great possibilities and, as it happened, it was not long before Bakewell more than justified the high opinions then formed of his skill. There can be little doubt that the dual batting tuition he received as a schoolboy was of immense value: at Oxford he was taught how to attack the bowling; at Northampton, thanks to assiduous work on a concrete pitch, even during the winter, he learned nearly all there was to be known about defence.

Having joined the staff of the Northampton County ground he made rapid progress and at the end of June, 1928, came his first appearance in county cricket, when he distinguished himself by bringing off four good catches against Essex at Kettering. In the return match he fared even better, catching eight men and scoring 69 not out. Thus the further interesting discovery was made that Bakewell was not only a capital bat, but a first-rate fieldsman as well, especially close in on the leg-side. In his first season he made 476 runs in twenty-eight innings and averaged 21, while in the following summer, as a regular member of the side, he jumped right ahead and in all matches scored 1,567 runs – an aggregate which only twice previously had been exceeded in Northamptonshire cricket. Promoted from number seven or eight to number one, he continued to do well and in 1930 had an aggregate of 1,701 which included an innings of 204 against Somerset at Bath.

As might have been expected, this remarkable advance was a little too good to be kept up, and in 1931 and 1932 he proved somewhat inconsistent in his batting, neither season bringing him any pronounced distinction for his county. His form, however, had already caught the eye of the Selection Committee and, with Hobbs dropping out of international cricket, Bakewell in 1931, was chosen as one of the England’s opening batsmen against New Zealand at Lord’s and The Oval. Scoring nine and 27 in his first Test match, he disappointed everyone, but at the Oval he made 40 out of 84 before sacrificing his wicket in a run out, rather than England should lose a more experienced batsman in Sutcliffe.

During 1932 it seemed that for the time being Bakewell had spoiled his chance of becoming the successor to Hobbs in the England team, but last summer he was again at his best. Early in June he made in consecutive innings, 246 against Nottinghamshire and 257 against Glamorgan, both these scores being records for the county. He finished the season with an aggregate of 1,925 runs in county matches, beating the previous best of 1,887 by R Haywood. In all matches he scored 2,110 runs, and enjoyed the distinction of being the only Northamptonshire player ever to obtain 2,000 runs in a season. 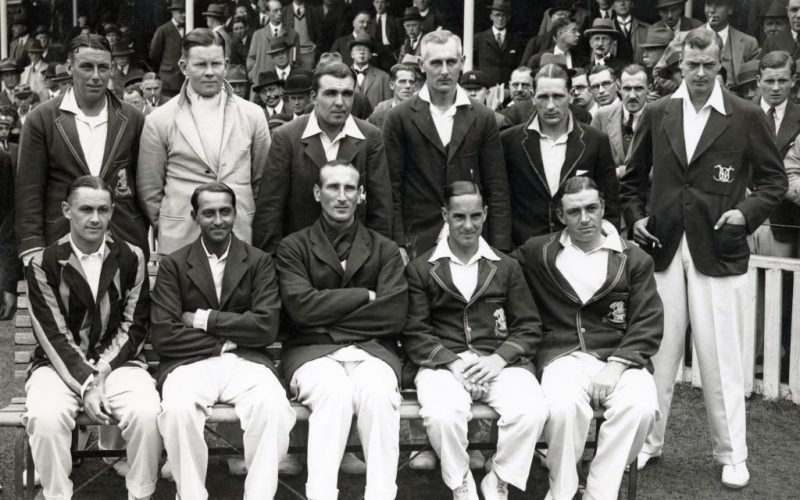 The England team prior to the second Test against New Zealand at The Oval, July 1931. Fred Bakewell is standing second from right

This splendid form was bound to earn recognition and, after being twelfth man for England against the West Indies at Manchester, he was chosen for the Oval match. On this occasion he made full use of his opportunity and, if starting somewhat shakily, scored 107 out of a total of 312. By his steadiness during a critical period he saved his side from the possibility of a breakdown. Thus in the short space of six seasons, Bakewell, thanks to the excellence of his early training, emerged from comparative obscurity right into the limelight, and as he is not yet twenty-six years of age, every reason exists why, given good health, he should in the future become even better.

To lovers of the orthodox Bakewell’s position at the wicket is looked upon probably with disfavour because of its ultra-modern tendency. He adopts a pronounced two-eyed stance, with his right shoulder brought round until he is facing the bowler almost full front. This inevitably creates the impression that he is a little cramped in his footwork, but such is not actually the case. When jumping in to hit, for instance, he gets well to the pitch of the ball, bringing off drives in fluent style with excellent rhythm in the swing of his bat and accuracy of timing. Consequently he has justly earned the reputation of being a first-rate and powerful off-driver. Like the majority of present-day batsmen, he is strong on the leg-side, either when turning the ball or really hitting it, and, by reason of his watchfulness, he is usually a difficult man to bowl out. Of his fielding anywhere near short leg nothing but praise can be written and, in his favourite position, he rarely makes a mistake.

Unfortunately for Fred Bakewell, a car accident brought a halt to what had been a promising career. In nine innings across six Tests, he scored 409 runs with three fifties and a hundred.