Conrad Hunte was a key figure in the West Indies series victory in England in 1963 and was named a Wisden Cricketer of the Year the following spring.

Conrad Cleophas Hunte is a dedicated man and a dedicated cricketer. West Indies have reason to be thankful for this. In recent years he had devoted his life to the cause of Moral Re-Armament (MRA), an important item of which teaches a person to be unselfish. Hunte has carried this into cricket.

By inclination, he is an aggressive type of batsman and, like most of his countrymen, loves to let his natural talents flow. Hunte realised that with men like Sobers, Kanhai and Butcher in the team, it was more important for West Indies to be given a sound, solid start in order that the abilities of the others could be used to the full. So Hunte disciplined himself for the needs of his side and did it so successfully that it is no exaggeration to say that without him West Indies might never have won the series with England in 1963.

He made two centuries, each of them vitally important. In the first Test at Old Trafford he scored 182 and paved the way for a total of 501 for six declared. This gave West Indies all the confidence they needed and they went on to win by ten wickets.

In the final match at The Oval, West Indies had to avoid defeat to win the rubber and up to a point an extremely close fight left the position doubtful until the last innings. West Indies wanted 248, a target which had seldom been achieved in the fourth innings of a Test in England. Again Hunte played for his side and his extremely sound 108 not out steered West Indies to a comfortable success by eight wickets.

Like many players from West Indies, Hunte began his cricket in a modest way, using fronds, the dried leaves of coconut palms shaped into a bat, a piece of cork covered with rags and bound with twine as the ball, and twigs snapped from trees for stumps. The playing surfaces were rough, mostly scrub in open fields. But if equipment and conditions were far from ideal, the enjoyment was high and Hunte, from the age of six, spent every possible moment playing the game. 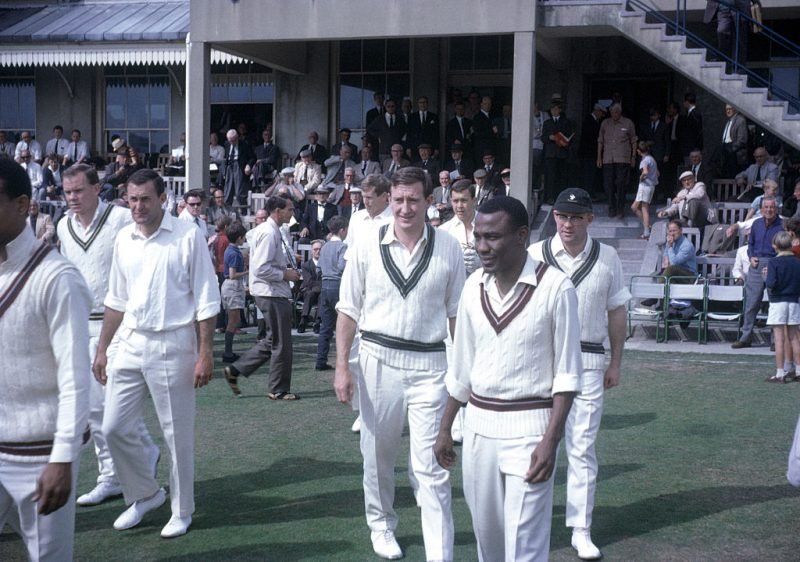 Born at St Andrew, in Barbados on May 9, 1932, Hunte grew up in an age which saw the resurgence of West Indies cricket. Just about every lad was keen on the game and like the others Hunte, at first, wanted to hurl the ball down as fast as he could and hit it out of sight when batting.

He first played organised cricket at the Belleplaine Boys School, St Andrew. There was no organised coaching, but Hunte, by his own ability, rose quickly and made the first XI when ten years old, playing with boys bigger and older than himself. From the start he was an opening batsman and although he never thought of himself as a bowler, he loved fielding. The school pitches were a big improvement on those of his early days, the boys themselves helping to prepare them before the games.

Hunte was also doing well with his education and he won a scholarship to the Alleyne Secondary School in 1944. He stayed there from 12 to 18. The cricket, naturally, was of a higher standard and Hunte quickly adapted himself. Almost as soon as he arrived at his new school he was spotted by the games master, now the head, Mr Harley C. Cumberbatch, who put him into the senior eleven along with boys of 18, offering him a shilling each time he scored 25 or more.

He captained the side in his last three years and while still at school he was invited to play for a newly formed team, the Belleplaine Sports and Social Club in the Northern section of the Barbados Cricket League. This gave him the opportunity of playing against better cricketers, several of whom represented Barbados. A little later he became a member of the Empire Club, a colleague there being Everton Weekes, his idol.

In 1950, Hunte was chosen to represent the Barbodos Cricket League XI against the Barbados Cricket Association and, scoring 137 not out at Kensington Oval, he became the first Barbados League player to make a century in this annual game. This launched Hunte on his first-class career, for he was selected to represent Barbados against Trinidad in February 1951. He scored 63 in the first innings, quite an achievement for a lad of 18 who was still at school. 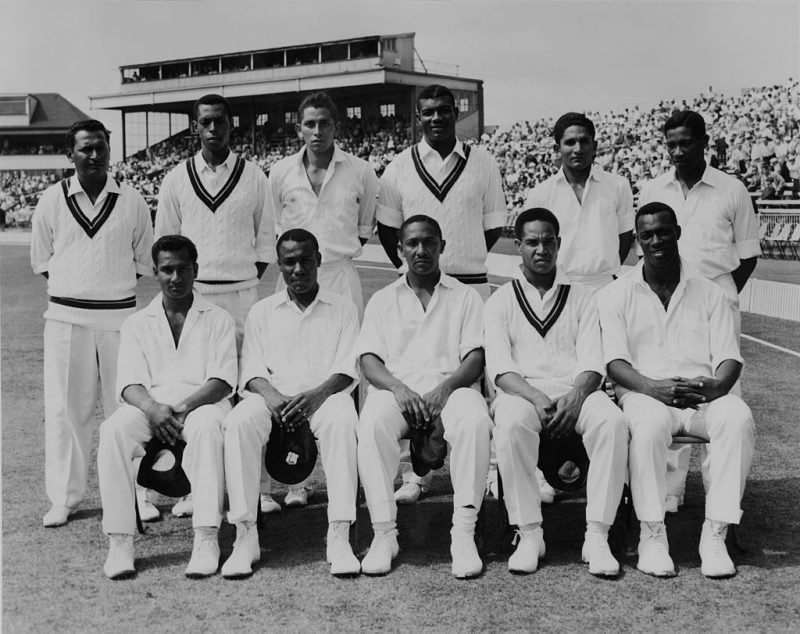 Conrad Hunte (front row, second from left) with the West Indies team in 1963

Hunte took up a teaching appointment at St Simon’s Mixed School and became a regular member of the Empire team. He practiced nearly every evening and the matches were played over three Saturdays. He left Barbados for the first time in 1951 when selected to tour British Guiana.

Hunte remained a teacher for two years before joining the Civil Service as an accounts clerk in the G.P.O. staying there until 1955. He had a short spell in life insurance before making cricket his full-time career, signing as professional for Leyland Motors in the Northern League in 1956 and moving to Enfield in the Lancashire League the following year. League professionals often move around a good deal, but Enfield thought so highly of Hunte that they retained him for six seasons, from 1957 to 1962.

Hunte made the first of his Test appearances against Pakistan during their tour of the West Indies in 1957-58 and he began with a century, 142 on his own ground at Bridgetown. He followed with 260 at Kingston and 114 at Georgetown, altogether scoring 622 runs in the series, averaging over 77. His first tour abroad was not so successful, for he made only 216 runs against India.

When England visited West Indies in 1959-60 he batted consistently and in Australia in 1960/61 he scored 110 at Melbourne. After five Tests at home against India in 1962 he made his first tour of England last season. In Tests he made 471 runs and averaged 58.87. In all first-class matches during the season he scored 1,367 runs, more than anyone else in the party.

Hunte was disappointed at missing the West Indies tour of England in 1957 for which he was regarded as a certainty. The circumstances surrounding his omission were somewhat mysterious. He told the West Indies Board that he was available, although he intended going to England to study economics and to play as a professional. He was surprised when no invitation came. Later he was told that the Board had sent him a letter, along with the rest, but it did not reach him in Chorley, Lancashire, where he was living.

About this time Hunte considered registering for Kent, but he deferred his decision while waiting to hear from the West Indies Board. When no invitation came he decided to join Enfield. After signing the contract he received a note from a Board member asking him to say whether he was available for the tour. He cabled back stating that he was, provided his release from Enfield could be obtained. When the names were announced Hunte was not among them. West Indies had to suffer for this. Asgarali and Ganteaume who toured instead, had disappointing tours.

Hunte decided to make his home in England and apart from his League cricket he did a fair amount of coaching while continuing his studies, but these he had to give up to become a full-time professional. Among his many fine performances is a share in the best stand in the history of West Indies, 446 for the second wicket with Sobers against Pakistan at Kingston in 1957-58. Hunte made 260 and Sobers 365 not out, the world record Test score. Altogether Hunte has obtained 2,193 Test runs, including six centuries, averaging 43.86.

During the fourth Test at Adelaide in 1960/61 he was batting in the second innings with Rohan Kanhai, who was on the way to his second century of the match. Hunte had reached 79 when he had a word with Kanhai, saying that there looked to be a quick single if the ball were played towards mid-off.

Next ball Kanhai hit straight to the bowler and dashed down the pitch. Hunte responded and narrowly missed being run out when Misson aimed at the stumps. In the same over Kanhai did exactly the same thing, playing the ball much too straight and running. This time Misson hit the stumps and Hunte was out. 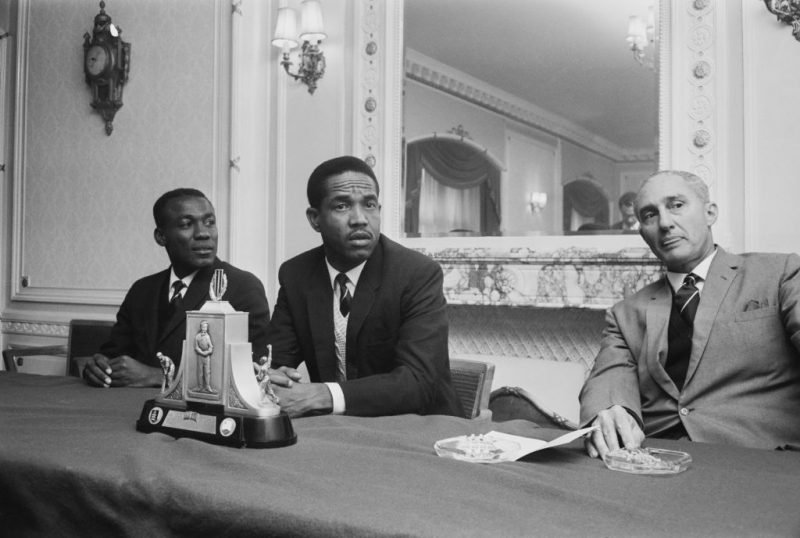 Looking back he saw Kanhai standing dejected with his head down and thought he had better cheer him up. Hunte went over and said a few comforting words before going off, as he thought, to the pavilion. Not until he heard bursts of laughter all round him did he realise that instead he had walked through a gate into the crowd, a long way from the pavilion. He had lost himself in thought. Kanhai went on to his second century.

Hunte began as an aggressive player, but changed his style in 1962 against India when he became more restrained in his strokeplay in order to ensure West Indies getting good starts. His strength has always been off his legs. He glides superbly, hooks with power and times his on-drives perfectly. He eliminated, to a large extent, the square cut and square cover drive, in other words the shots played with a cross bat, although he returns to them when he finds himself restricted by a bowler, such as Shackleton. He seldom bowls, although he can send down useful slow-medium cutters, either way, but he is a great fieldsman, usually close to the bat.

His interest in MRA began in Australia where he saw the film, The Crowning Experience in Melbourne. This depicted the life of Dr Mary McLeod Bethune, the black educator and he decided to take an active part in the movement. “I had always seen my aim in life was to devote my cricket talent to bringing nations closer together,” he says. Hunte devoted part of his tour money last season to the work of the MRA in the Caribbean and intends to return to the West Indies to coach and further the cause.

Related Story: Quiz! Name the West Indies batsmen with the most international runs in the 2000s

Hunte’s family played little cricket although they always encouraged him. He has three brothers and four sisters. One brother was a good club cricketer and the youngest won his way into his grammar school eleven as an opening batsmen, showing promise of becoming a good player. Two of his sisters played cricket at school, one of them now being a nurse in Leicester.