Mark Taylor’s dominance with the bat was a huge factor in Australia’s 1989 Ashes triumph. It earned him a spot as one of Wisden’s Cricketer of the Year.

It was no coincidence that the Australian team’s record sequence of first-innings totals of 400 or more in nine consecutive Test matches in 1989 began with Mark Taylor’s arrival on the Test scene. The sturdily built 24-year-old left-hander from New South Wales was the missing link the selectors had been seeking, even though it meant breaking up the previously successful combination of Geoff Marsh and David Boon to accommodate him. The critical point in Taylor’s favour was his left-handedness, which allowed a return to the left and right-hand opening combination advocated by Australia’s coach, Bob Simpson, whose own partnership with southpaw Bill Lawry in the 1960s had been so prolific.

Taylor’s arrival did more than disturb the line of the opposing new-ball bowlers. It triggered a chain reaction which slotted into place a previously fragmented batting order. Boon quickly relished his role as a strokeplaying third opener at No. 3, and Dean Jones, inconsistent against the new ball, moved down a place to No. 4 and then to No. 5, where he began collecting runs with a cocksure zest which ideally complemented the higher order. Yet without doubt it was Taylor, the least experienced of the top six, who was the key batsman in Australia’s triumphal march through England in the summer of 1989.

Before his arrival in England, Mark Anthony Taylor was virtually unknown outside Australia, apart perhaps from his unwitting role in the confusion that followed the selection of his off-spinning club and state team-mate, Peter Taylor, for the Sydney Test against England in January 1987. (Mark believed for three hours that he was in the Test team.) By the time he left England four months and 1,669 first-class runs later, his name was being written into the record books alongside some of the game’s immortals.

His Test aggregate against England of 839 runs at an average of 83.90 had been bettered in an Ashes series only by Bradman and Hammond (both in five Tests to Taylor’s six), and at The Oval he had moved ahead of Neil Harvey, a fellow New South Wales left-hander, into third place on the all-time list of run-scorers in a single series. By the end of the year, with two more centuries at home in the two Tests against Sri Lanka, he had become the first player to hit 1,000 runs in his first calendar year of Test cricket, finishing 1989 with 1,219 runs at an average of 64.15 from eleven Tests.

In the opinion of his captain, Allan Border, Taylor played the crucial innings of the Ashes series when, Australia having been sent in to bat on a suspect pitch, he batted throughout the first day of the First Test at Headingley, a ground littered with the broken dreams of previous Australian sides. Playing in only his third Test, Taylor was less interested in personal milestones than in surviving until six o’clock, and he spent a sleepless night on 96 before reaching his maiden Test century the following morning. He went on to make 136, and later that day Stephen Waugh also hit his first Test hundred in an Australian total of 601 for seven declared. The die had been cast.

Taylor was to become a familiar sight to England’s bowlers that summer. He occupied the crease for almost 38 hours – the equivalent of more than six full playing days – throughout the series. His eleven innings produced a sequence which read 136, 60, 62, 27, 43, 51, 85, 37 not out, 219, 71 and 48, with his 219 at Trent Bridge the highest in Ashes Tests in almost a quarter of a century. In that innings, he and Marsh batted throughout the first day for 301 and carried on the following day to 329, the highest opening stand in the history of Anglo-Australian cricket. Such was his consistency that in a sequence of 25 first-class innings on tour, he failed to get into the twenties or beyond only once. England’s selectors would have given their eye-teeth for such reliability.

Born in Leeton, New South Wales, on October 27, 1964, Taylor learned the basics of batting while his father threw cork compo balls to him in the concrete garage of their home in Wagga Wagga, where the family had moved when Mark was eight. The family cricketing hero was Arthur Morris, the great New South Wales left-hand opener, whose 1948 aggregate of 696 Taylor passed in the Fifth Test at Trent Bridge. Morris wrote to congratulate him.

He played his first organised cricket at South Wagga primary school when he was ten and, always an opening batsman, scored his first century at the age of thirteen for the Lake Albert club at Bolton in Wagga. Geoff Lawson, another product of the club, recalls watching the innings. The family then moved to Sydney, where Taylor played for Chatswood High School and in the Lindfield Shires under-16 grade before joining Northern Districts, where he still plays. He joined the Waugh twins, Stephen and Mark, in under-19 youth internationals for Australia against Sri Lanka in 1982/83. 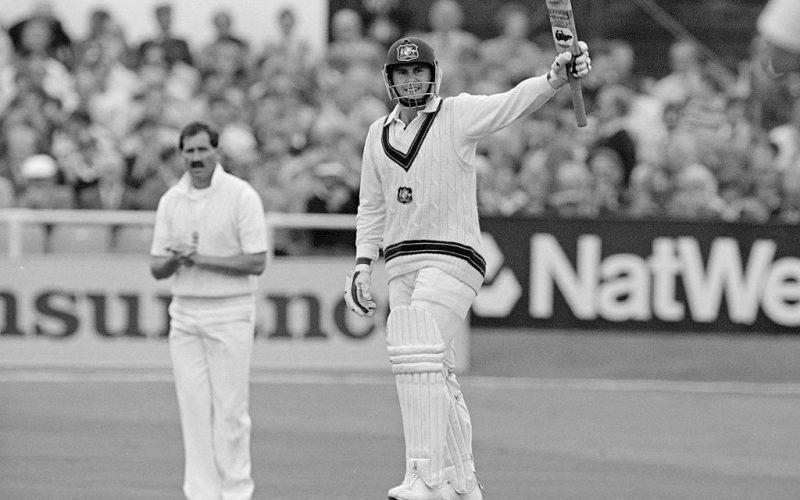 Taylor, a qualified surveyor, broke into the state team at the start of the 1985/86 season and promptly scored nearly 1,000 runs in the first season. Another solid year was followed by a lean season in 1987/88, after which he spent an English summer with Greenmount, helping them win the Bolton League for the first time by scoring more than 1,300 runs at an average of 70. It was there that he gained the confidence to become a strokeplayer and so shrugged off the “stodgy” label which had been attached to him earlier in his career. That summer in Australia he was called into the Australian team for the last two Tests against the touring West Indians, even though he had not scored a century all season.

Like most of his Australian teammates, Taylor favours a light bat – about two and a half pounds – and a comfortable, traditional stance. Once considered primarily a leg-side player, he developed his off-side driving in England, where he made a speciality of back-foot shots through the covers. He is a superb slip fieldsman – some say the best Australian since Simpson – and plays off a single-figure handicap at golf. Strangely, perhaps, he swings right handed, but it is the least orthodox thing about him.

After his record-breaking start in Test cricket, Mark Taylor went on to become one of Australia’s greatest captains. He played in 104 Tests, scoring 7,525 runs at 43.49.