For Hanif Mohammad, the prime motivation was always his unwavering, single-minded concern for the success of Pakistan cricket. He was named a Wisden Cricketer of the Year in 1968.

Few major innings since the war have provoked such contradictory critical appraisal as that played by Pakistan’s captain in the Lord’s Test of 1967. It began at 4.40 p.m. on Friday, July 27, and ended only when he ran out of partners at 3.24 p.m. the following Monday.

His actual entrenchment at the crease, after deductions for rain, meals, sleep and an interminable English sabbath, lasted nine hours two minutes and his eventual score was 187 not out.

Press comment along the way embraced the full spectrum of colourful opinion: from the outraged puce of those writers who regard themselves as the guardians of sporting entertainment to the purplest prose that could be mustered by others who acclaimed it one of the batting masterpieces of their time.

If the reading public were bemused, one man remained totally unconcerned. This was the author of the innings, Hanif Mohammad.

As was his habit during times of strain on a tour beset by problems he returned to his hotel room to listen to sitar music, the beauty of which is a mystery to most Western ears. He brought twelve tapes of it with him from Karachi as if aware that his philosophies about both captaincy and batsmanship could lead to loneliness.

Occasionally they did, but the massive strength of Hanif is an unwavering, single-minded concern for the success of Pakistan cricket. Success meant results and the result at Lord’s was a draw snatched not so much from the jaws as the very digestive system of defeat.

At one point, after an hour’s play on the third day, Pakistan were 99 for six in reply to England’s first innings 369. Of those 99 Hanif had himself scored 43. When he limped away, still unbeaten, at the loss of his last partner shortly before tea on the fourth day, Pakistan’s total was 354.

For many men it would have been the innings of a lifetime. For Hanif it was a tiresome necessity, no greater than similar innings played in Australia and a minor triumph compared with another in West Indies. But of that more later, for statistics are in danger of drowning the man.

There is not much of Hanif Mohammad to drown. He stands five-feet-six and weighs nine and a quarter stones at his fittest. In 1967 he was 32, married with children, slightly homesick, distant until you knew him, charming when you did, indifferent to criticism or adulation, physically hampered by recurring styes on the eyes and a leg injury that had threatened his career, in professional life a commercial agent with Pakistan International Airlines and, in confessional moments, a man disturbed by his own capacity for introspection.

Born at Junagadh on December 21, 1934, he is the middle of five sons of a family whose cricketing story lacks only a competent biographer. Most publishers, indeed, would be tempted to classify it as romantic fiction.

All five brothers were destined not only to play first-class cricket but to appropriate a remarkable number of world records in the process. Wazir, the eldest, played 20 Tests, Hanif has so far played 51, Mushtaq 17. Sadiq, the infant of the brood, has already appeared for Pakistan’s Under-25 team. Only Raees, the second son, missed international selection and few doubt that he would have made the grade had a serious injury not forced a premature retirement.

Among their records are Mushtaq’s emergence as a Test player at the incredible age of 15 years and 124 days and Hanif’s unique achievements of having played the highest (499 runs) and longest (999 minutes) innings in the history of the first-class game.

Such has been their combined impact on Pakistan cricket that it is heavily ironic that their cricketing roots do not even spring from the territory now known by that name. They were born in the Indian township of Junagadh of professional class parents who excelled at ball games at an amateur level.

Their father was a good club cricketer, their mother a regional badminton and table tennis champion. The shattering upheaval of Partition then put paid to their small and gentle world. They moved to Karachi as founder-inhabitants of Jinnah’s new Muslim state. 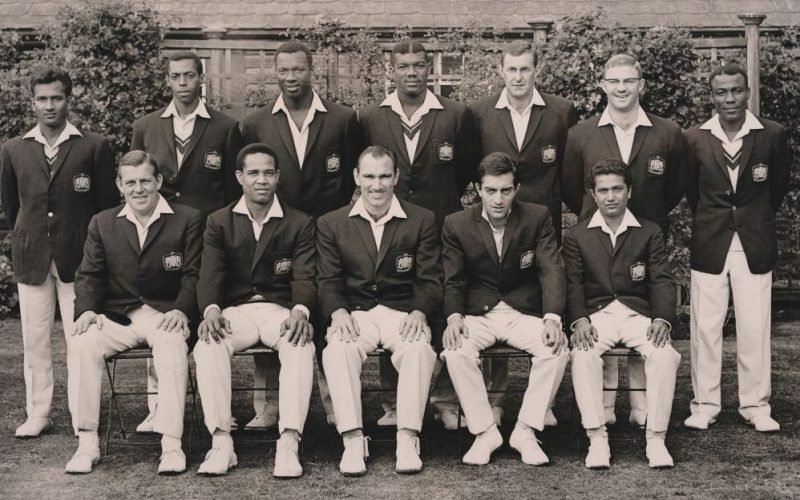 The star-studded Rest of the World team prior to their match against England XI at Lord’s, 1965. Hanif is seated first from right

Hanif, at the time, was still just short of his teens but looking back now he still regards his formative cricket education to have gained much from long evenings batting by electric light on the concrete terrace in front of his parent’s house in Junagadh.

Even then cricket was played with an unfrivolous earnestness. He recalls tennis ball “Test Matches” between his brothers and neighbouring children which lasted five or six evenings before a decision was reached. Tennis balls were shaved of their matt on one side to produce a delivery which could swing up to a yard in the air. They also had a cork ball which, Hanif claimed with a smile, “came off that smooth concrete faster than any of your English fast bowlers can bowl at present.”

They learned to keep their heads down and their elbows up because a lost ball could mean a long search in the darkness beyond their modest boundaries.

If it sounds like the curtain-raiser of some schoolboy serial the subsequent instalments maintain the pace. In Karachi, Hanif soon established himself as a prolific scorer in school cricket.

An innings of 305 won him a place for Karachi against the Punjab and his 93 not out against Test-class bowlers in that match earned him a trip to England at the age of 17 as one of the original Pakistan Eaglets. By the following year, still two months short of his 18th birthday, he was playing Test cricket for Pakistan.

His Lord's Test innings of 1967, as I wrote at the outset, was but one peak in the mountain range

It can scarcely be claimed that his Test career has been one of uninterrupted success. It could hardly be so in view of Pakistan’s comparative immaturity as a Test-playing nation. But though he has had lean years through loss of form or injury or both there have been enough truly herculean feats along the way to make Hanif’s name synonymous with defiance and endurance. They were born not only of the superb balance and timing learned on the Junagadh terrace but of remarkable powers of sustained concentration and, always, the passionate belief in the cause of Pakistan.

His Lord’s Test innings of 1967, as I wrote at the outset, was but one peak in the mountain range. In 1954, in Pakistan’s very first Test at Lord’s, he occupied the crease for 195 minutes over 20 runs to ensure a draw. In another at Dacca he batted all day for 64. His first Test century, against India, was an affair of some eight and a half hours. In Australia, in the only Test of Pakistan’s first tour, he scored 104 and 93 to save the match.

All of which achievements fade into the commonplace compared with his vigil in the sun at Bridgetown, Barbados, in 1958. A crushing first Test defeat seemed inevitable there when West Indies amassed 579 for nine and then bowled Pakistan out in their first innings for 106.

Three and a half day’s play were still possible when Pakistan batted again. To save the game, therefore, it was virtually imperative for some batsman to smash the world endurance record.

Cometh the crisis to end all crises, cometh Hanif Mohammad. He scored 337 in an occupation of 16 hours 39 minutes. It was the longest innings ever known. The Test was drawn and Hanif, for his pains, had three layers of skin burned away beneath his eyes by the harsh glare reflected from the pitch.

With the Second Test against Pakistan beginning tomorrow, it’s a good moment to remember Hanif Mohammad, one of their greatest batsmen.

Having thus erased Sir Leonard Hutton’s name from the record book on one score he soon turned his attention to another knight and another long-held record: Sir Donald Bradman’s 452 not out, established 30 years earlier. In a Trophy match against Bahawalpur in Karachi, the year after his Barbados innings, he smashed that, too, by scoring 499 in just short of 11 hours before running himself out trying to get the strike in the final over of the day.

The questionable quality of the opposition bowling perhaps makes this the lesser of his two major records. But it is in the book, another battle honour for his nation’s flag.

Where Hanif, the smallest of the brothers, stands a head above the others is in the quality of leadership. It accentuates his loneliness for it is based less on dressing-room democracy than a determination to lead from the front by personal example. He accepts total responsibility and wields absolute authority. He has been called the Little Master and, in every sense the description fits him well.

Such single-mindedness at the wicket, or in captaincy decisions, has not always endeared him to crowds or critics. The total hours that he has been barracked or slow-handclapped around the world may well come close to constituting another kind of record. Equally his many refusals to court the slightest risk of defeat on another occasions have earned him many hard words in print.

Hanif Mohammad hears the public, reads the Press and proceeds precisely as before. To him there is only one side to the argument: Pakistan first, last and for ever.