George Hirst, who died in May 1954, was one of the greatest all-rounders in history. His Wisden obituary showcased his jaw-dropping statistics.

George Hirst was one of the most illustrious cricketers who graced the Golden Age. On the 24 occasions on which he played for England, Hirst achieved only a few noteworthy performances, but such was his prowess with bat and ball for Yorkshire in a career spanning 40 years that Lord Hawke described him as the greatest county cricketer of all time.

Certainly this blunt, outspoken man of extreme buoyancy and cheerfulness brought such a tenacity to the game that no match in which he figured was won or lost till the last ball was bowled. Small wonder, therefore, that in Yorkshire he was an unchallenged hero, and throughout the length and breadth of England his popularity stood unrivalled. 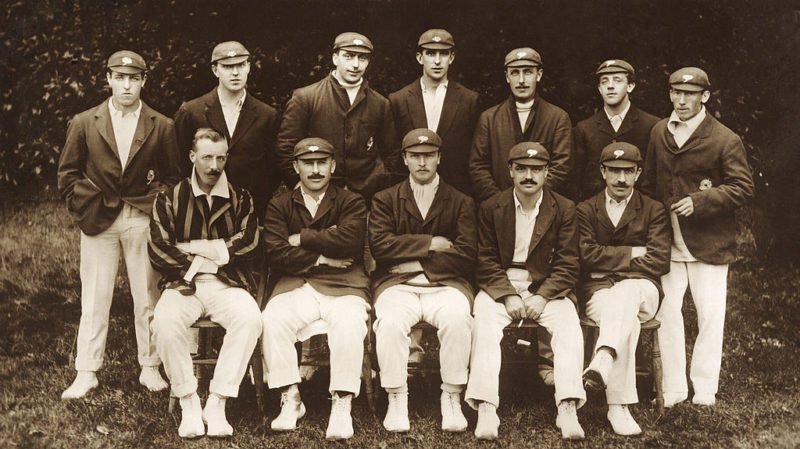 Hirst (front row, second from left) pictured with the rest of Yorkshire’s side prior to their match against Sussex, August 1910

Figures alone tell only part of the story of Hirst, but they show unmistakably his supreme prowess as an all-round cricketer in the fullest meaning of the phrase. Between his first county game for Yorkshire in 1889 and his last in 1929, Hirst scored 36,203 runs, average 34.05, and took 2,727 wickets, average 18.77; at his peak friends and opponents alike recognised him as the best mid-off in the country, with a pair of hands so sure that a considerable proportion of his 550 catches were made from scorching drives in a period when strong driving was an essential component in every batsman’s game.

The measure of Hirst’s ability is best reflected in that he accomplished the double feat of 1,000 runs and 100 wickets 14 times, a number surpassed only by his renowned contemporary, Wilfred Rhodes (16), and that he alone made 2,000 runs and took 200 wickets in a season, which he did in 1906. His figures were 2,385 runs and 208 wickets. Years afterwards, when asked if he thought his record might be broken, Hirst made an answer typifying his whole approach. With a twinkle in his eye, he replied: “I don’t know, but whoever does it will be very tired.” Yet, through the years, he himself showed little evidence of fatigue. Only a very fit man, such as he was, could have reached 1,000 runs in 19 seasons and taken 100 wickets in 15 different years. 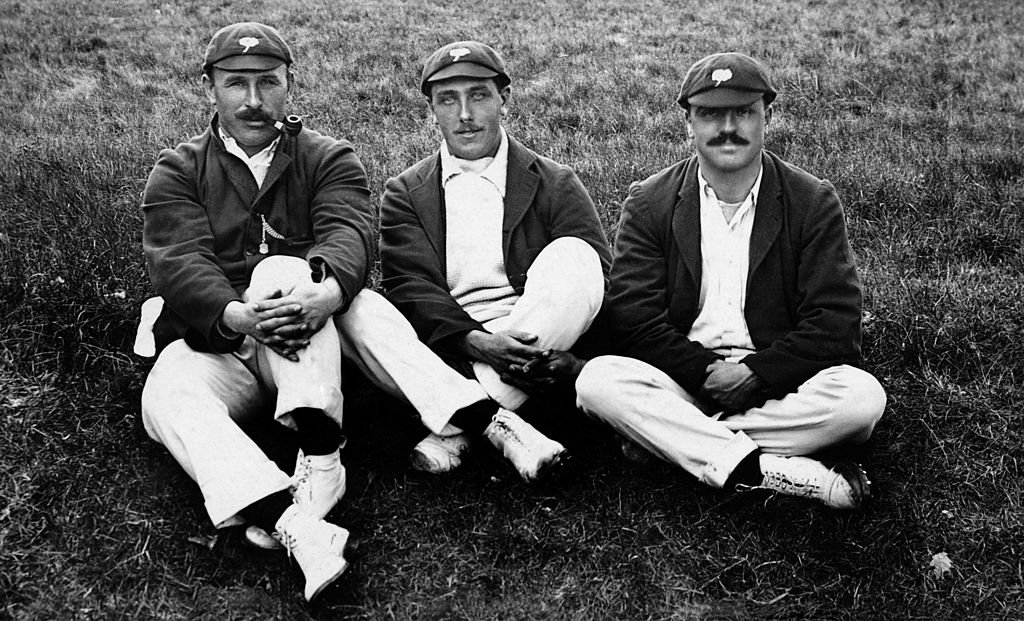 Hirst (left) with his partner-in-crime, Rhodes (centre), and Schofield Haigh, 1905

The people of Kirkheaton and the surrounding areas almost lived for cricket and from an early age Hirst, born on September 7, 1871, showed that he would be a player of more than ordinary skill. He became associated with Huddersfield when 18 and before his 19th birthday his first ambition, that of playing for Yorkshire, was realised. Hirst was fond of recalling that in those days his equipment, which he carried to the ground in a canvas bag, was worth no more than ten shillings, that he wore a shilling cap, a sixpenny belt and brown boots. Success in county cricket came slowly, but after some seasons of quiet progress, he established himself in 1896 by scoring 1,122 runs and taking 104 wickets. Thenceforward he gathered strength as he went along.

Of his 60 first-class centuries, all but four were played for Yorkshire, his highest being 341 – still a county record against – Leicestershire in 1905. Leicestershire suffered particularly from his bowling as well as from his batting. Twice he did the hat-trick against them, once in a match in 1907 in which he took 15 wickets, his greatest success in one game. Five times Hirst bowled unchanged through a match, Rhodes being his partner on three occasions and Schofield Haigh on the other two, and twice he took three wickets in four balls.

Hirst confidently murmured: “We’ll get ‘em in singles, Wilfred” – which they proceeded to do

The combination of Hirst and Rhodes was feared as much by batsmen as that of Peel and Briggs, Gregory and McDonald and, in later years, Grimmett and O’Reilly. In the 1902 Test match at Birmingham, Hirst and Rhodes bowled out Australia for 36 runs, their lowest total in any Test. Rhodes took seven wickets for 17, and Hirst three for 15. This was the most memorable joint feat of Hirst and Rhodes, but in the next match the Australians met Yorkshire, who put them out for 23 (Hirst five for 9 runs and F. S. Jackson five for 12). Another Yorkshire bowling triumph in which Hirst played a notable part occurred in 1908 when he and Schofield Haigh dismissed Northamptonshire for 27 and 15, Hirst taking twelve wickets for 19 runs and Haigh six for 19.

On his two tours to Australia, with A. E. Stoddart’s team in 1897-98, and P. F. Warner’s side in 1903-4, Hirst did not realise English hopes but he played a conspicuous role in a dramatic victory over Australia at The Oval in 1902. When Hirst, who scored 58 not out in the final innings, was joined by the last man, his lifelong friend and colleague, Rhodes, England required 15 to win. The story has been passed on that, as Rhodes met him on the way to the wicket, Hirst confidently murmured: “We’ll get ‘em in singles, Wilfred” – which they proceeded to do. Whether true or not, that is the type of remark Hirst would have made. One last instance of his versatility; in 1906 he scored two centuries and took eleven wickets in the match against Somerset at Bath.

Hirst, in fact, has been described as the father of all modern seam and swing bowling

Essentially a self-taught batsman, Hirst frequently gave of his best when the pitch afforded help to bowlers. His remarkable quickness of eye and feet enabled him to develop the hook and pull strokes so well that some bowlers complained that they found exceeding difficulty in bowling to him anything except a yorker which he did not treat as a long-hop. His liking for the hook was costly only in Australia. By contrast to his right-handed batting, Hirst was a natural left-arm bowler, a shade faster than medium. After a long bounding run, he delivered with a free, easy action and he often made the new ball swerve and dip into the batsman so late that many of his victims confessed themselves as suspecting that they had been thrown out from cover. Hirst, in fact, has been described as the father of all modern seam and swing bowling. Before he showed its possibilities, bowlers rubbed the new ball in the dirt to take off the polish.

Hirst, short and thick-set, found perpetual pleasure in every game he played and captains such as Sir Pelham Warner have testified that they could not have wished for a better man to be in their teams. Both as a player and as a personality, none could speak too highly of him. Sir Pelham has said that when things were going wrong on tour Hirst was first to come to the aid of everybody with his ready wit.

When Hirst was given a benefit by Yorkshire in 1904 he received a sum of £3,703, a remarkable figure in those days. Seventeen years later a testimonial for him produced £700. Virtually that came at the finish of his active career, for he became coach at Eton College in 1921, but he played occasionally for Yorkshire for another eight years. During his 18 years at Eton, Hirst endeared himself to hundreds of young cricketers who benefited from his kindly guidance, and nothing was more fitting than that M.C.C. should include him in the 26 professionals whom they honoured in 1949 with Honorary Life Membership.

Cricket was George Hirst’s life and less than a year before his death he sat with Rhodes, now sightless, while England recovered from a seemingly hopeless position against Australia at the Leeds ground on which he himself so often stood in the breach.