George Geary was one of the leading bowlers in the game between the wars. His 124 wickets in 1926 earned him a Wisden Cricketer of the Year award.

George Geary, by his all-round skill, one of the mainstays of the Leicestershire eleven, was born on July 9, 1893. He began his cricket when a boy at Barwell, a village in Leicestershire, and, joining the ground staff at Leicester in 1912, took part in one or two matches for the county. The following year he earned a regular place in the side, and the bulk of the bowling falling upon his shoulders, he took 79 wickets for 26 runs apiece.

A season later his record was 115 wickets, but upon cricket being resumed after the war he met with little success with the ball. As some compensation, however, he showed great advance as a batsman. After a summer’s absence in 1920 he came back to the Leicestershire eleven, but not until 1923 did he make any marked progress. Since then his all-round improvement has been most pronounced. For four consecutive seasons has he headed the Leicestershire bowling averages and in 1925 he made his first hundred for the county.

With a high delivery and nice easy action, Geary is a fine type of a medium-pace bowler, combining accuracy of length with plenty of spin. On anything like a treacherous or damaged pitch his bowling is not only difficult to score from but demands great skill in playing.

Geary went to South Africa with Lionel Tennyson’s team in the winter of 1924/25, taking in all matches 86 wickets for less than 15 runs apiece, and in the five unofficial Tests heading the bowling averages. His spin on the matting wickets was very effective, and if, as a batsman, he did not fare particularly well, he proved himself, as in England, a first-rate slip fielder. 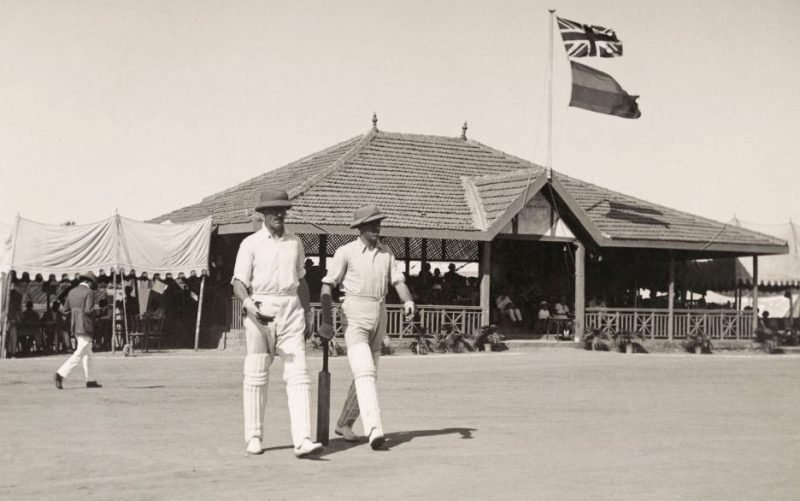 George Geary (right) and Jack Parsons walking out to bat during a tour match against All Karachi in Karachi, circa October 1926

Last season, during a fortnight in June, he took 39 wickets in eight innings, 401 runs, starting with 14 each against Hampshire at Southampton and Lancashire at Ashby-de-la-Zouch. His success in the latter game helped in a notable victory over the champions. Picked for England against Australia at Leeds, he did nothing much in bowling but, playing a fine innings on the last morning, assisted Macaulay in a ninth-wicket partnership of 108 which extricated England from a very awkward situation. At the Oval he did admirable work in the field. During the winter he visited India with the MCC team.