In the 2020 Wisden Almanack, former England quick Paul Allott remembered the life of his great friend, the late Bob Willis.

There are some things you cannot be late for. Rushing to see Bob for the last time, I nearly missed him, thanks to the vagaries of South Western Railway’s service to Putney. That would have tickled him, for he was a champion of public transport. He knew every bus route, every underground line, every station; he even knew the timetables (he was more informative than Transport for London). I arrived at his home with – it turned out – seven minutes to spare, enough for one final hand squeeze. Bob himself was late only once: two weeks later, for his funeral, when the hearse got stuck in traffic in Barnes. He should have gone by bus.

Our friendship had begun towards the end of his playing days, and endured nearly four decades of broadcasting, travelling and holidaying together. We became the best of pals. It all started at Old Trafford, during the 1981 Ashes series which ultimately defined him. I was freshly selected, not yet 25, and in awe of the dressing-room. They were heroes, never mind teammates: Brearley, Boycott, Botham, Knott – and Willis, well established as England’s premier fast bowler, and more than seven years my senior. I thought of him as stern, unapproachable and a little frightening. Yet he welcomed me with a smile and, after practice, was the first to buy me a beer in The Romper. My preconceptions probably stemmed from a deep respect, and a sense of not wanting to let him down.

Before we bowled together, however, we batted together, and put on an improbable 56 for the tenth wicket, at which point Bob tried to hit Dennis Lillee back over his head. The partnership may have inspired Brearley to keep us in tandem with the new ball. I was a novice, but I had a maiden fifty and my home crowd behind me: there was little time for nerves. Between us, we took four wickets in seven deliveries: Bob ripped out John Dyson, Kim Hughes and Graham Yallop, and I got my first Test wicket, Graeme Wood. We didn’t play many Tests together, but he was instrumental in my success in both my first and his last, against West Indies at Headingley in 1984, when I took my best figures of six for 61.

Bob always cared, and had a mission, largely unfulfilled, to bring about a slimmed-down county structure. It began on the boundary at Nagpur during a four-month tour of India in 1981/82 – my first England trip, his tenth. Sheets of foolscap were filled by a new domestic schedule, with four-day matches separated from one-day cricket to allow rest and practice; some Tests were standalone fixtures. Bob was 20 years ahead of his time. Later, he co-founded the Cricket Reform Group, which championed the game’s restructuring. We even had an audience with an intrigued Duncan Fletcher in Bulawayo in late 2004. In the end, though, Bob was forced to concede there were too many interests at work.

We also shared a love of beer, the fast bowler’s time-honoured staple; Bob was an honorary member of CAMRA. He later educated me in the world’s wines, with one exception: life was too short, he argued, to drink Italian. Dylan and Wagner almost exclusively sustained his musical tastes; Dylan I loved, but he took mercy on me with Wagner. Golf proved a frustration, not through want of trying. He was an entertaining partner, though, because you never quite knew what was coming: he could play four sublime holes, then five-putt for no apparent reason. 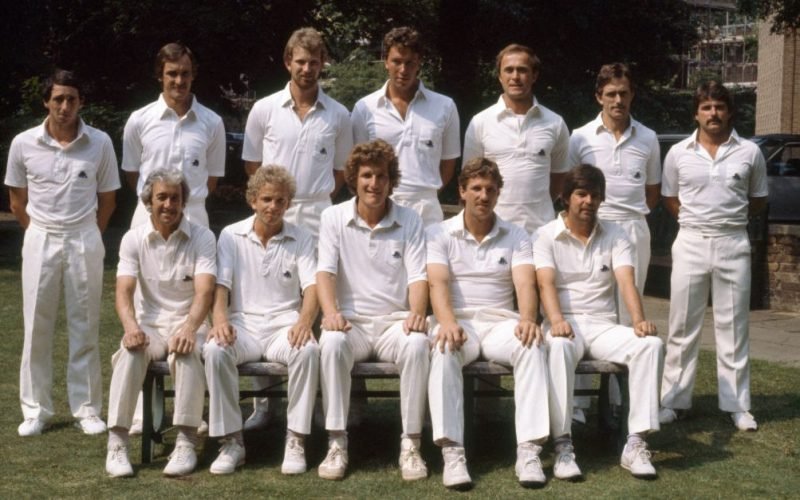 England, led by Bob Willis, before the 1982 Lord’s Test against India. Paul Allott is stood third from left in the back row

Our travels gave us our best experiences, some with an unexpected twist. After months of meticulous planning of our route around the winelands of Central Otago, Marlborough and Hawke’s Bay, Bob decided within a day of landing in Auckland that he would be teetotal for the entire tour. He suffered from insomnia, and thought six weeks off the booze would restore his sleep. Needless to say, it did not, though at least it provided me with a driver. It also emphasised his strength of will, and the stubborn streak that sustained his career.

After simultaneous operations on both knees, and a withering assessment of his fitness from Tony Greig following the Centenary Test at Melbourne in 1976/77, Bob embarked on a regime of slow-paced distance running. It prolonged and rejuvenated his bowling. He advocated the method for all aspiring quicks, and remained convinced the modern breed spent too much time in the gym. Bowled together, batted together, drank together: Bob Willis and Paul Allott on holiday in Sussex

Perhaps he could have spared himself at least some of the effort. Not long ago, when we were commentating at Taunton, he marked out his run, all 43 paces. He got to the end, a yard or two inside the boundary, looked back at the stumps, and said: “I must have been bloody mad!”

If there was one thing he could have changed, it would not have been his high-stepping, idiosyncratic run-up, which became the most mimicked in the game, or his awkward, angular delivery. (He thought he bowled with a perfect sideways action, like Fred Trueman, until he saw himself on TV, and was mortified.) No, it would have been his penchant for no-balls. He delivered 939 in Test cricket, more than any other bowler, which added about 50 miles to the Willis clock, and probably deprived him of 20 wickets. Little wonder he thought himself mad. (In those days, no-balls didn’t count against the bowler. If they had, Sky Sports statistician Benedict Bermange reckons his Test bowling average would have risen from 25 to 28.)

I often wondered how viciously he would have admonished himself for overstepping so frequently, in his guise as Sky’s hanging judge on “The Verdict”, which he made required viewing. If Bob’s TV persona was carefully constructed, there was no disguising his apoplexy at England’s Test frailties – although in real life he was more usually caring, funny, shy and determined. And, deep down, he enjoyed nothing better than watching England succeed. The players knew that too, even those watching from behind the sofa.

Bob was undoubtedly a great bowler. When he reached 300 Test wickets, only three others had beaten him to it: Trueman, Lance Gibbs and Lillee. He was at his best when he bowled fast, angling the ball into the right-hander and getting steep bounce from a length. His best spell will always resonate, yet he nearly missed Headingley ’81 altogether. He had been ill the week before, and out of form, so the selectors picked Mike Hendrick instead. But Bob insisted he was fit, and they changed their minds. Hendrick’s invitation (we received letters from the TCCB in those days) was pinched from the postman’s sack by an astute secretary at Derbyshire. And a hastily arranged Warwickshire Second XI game gave him a chance of bowling some overs. On the morning of the Test, Brearley wanted Willis ahead of off-spinner John Emburey. Botham’s Ashes, yes, but with due deference to Willis’s Headingley, where he seemed entranced – as he so often did. He regarded sledging as unnecessary.

He had a wonderful, self-deprecating sense of humour, masking a long battle with depression, which only those close to him knew about. Once, we went to pick up our accreditation in Melbourne, only to find no pass for Bob. There was, though, one for Bruce Willis, which he wore uncomplainingly for the next couple of months. Bob would have been the last person to think of himself as an all-action hero, but it described my old friend better than he ever knew.

Paul Allott played six of his 13 Tests alongside Bob Willis, and took 652 first-class and 321 one-day wickets in a career spanning 16 years.