Frank Woolley is celebrated as one of England’s finest batsmen, but it was his bowling that did much to earn him a Wisden Cricketer of the Year award in 1911.

Frank Edward Woolley was born at Tonbridge on May 27th, 1887, and thus has the best of qualifications to play for Kent. As a small boy he was always to be found on the Tonbridge cricket ground, and his natural ability both as batsman and bowler attracted so much attention that in 1903 he was engaged to take part in the morning practice and play in a match or two if required.

In the following year, he became a regular member of the Tonbridge ground staff. Both in 1904 and 1905 he did capital all-round work and those behind the scenes knew when he was given his chance in the county eleven in 1906 that Kent possessed a colt of exceptional promise. To the general public, however, he was almost unknown and his all-round form against Surrey at the Oval in his third county match came as nothing less than a revelation.

To begin with he took three Surrey wickets, clean bowling Hayward, Hayes, and Goatly. He then played an innings of 72 and when Surrey went in again he obtained five wickets for 80 runs. Finally, he scored 23 not out, winning a wonderful game for Kent by one wicket. The match established his reputation.

Thenceforward he was regarded on all hands as one of England’s coming cricketers. He followed up his score at The Oval with an innings of 116 against Hampshire at Tonbridge, and though, owing to Kent’s abundant supply of talent, he had to be left out of some matches his first season’s cricket gave complete satisfaction. For a side exceptionally strong in batting he stood seventh on the list, with an average of 28, and as a bowler he had a record of 42 wickets for just over 20 runs apiece.

In 1906 it will be remembered Kent first carried off the Championship. From that year onwards Woolley has been a regular member of the Kent eleven. In the last four seasons he has done many brilliant things, but he has not, as his friends hoped, gone right ahead of all other left-handed batsmen in this country. He is today a first-rate county cricketer – one of the most valuable members of the strongest team – but he has yet to assert himself in representative elevens. 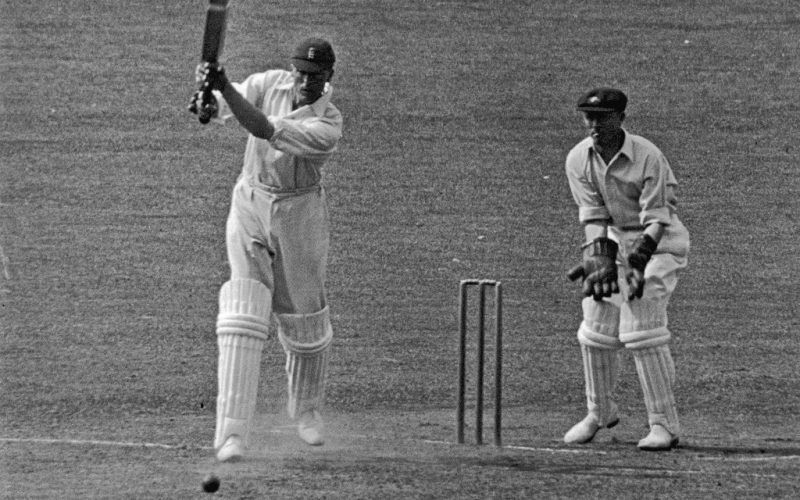 Frank Woolley in action against Australia at Headingley, circa 1926

When playing for England in the final Test Match at the Oval in 1909 he failed against Cotter’s fast bowling, and for the MCC’s team in South Africa he did not find his form till the tour was nearly over. As a set off against these disappointments, however, he can show a fine record for Kent. In 1907, though his bowling amounted to little, he scored 1,034 runs with an average of 28; in 1908 he scored 1,120 runs and took 52 wickets; in 1909 he made 922 runs and took 57 wickets, and last season he not only kept up his batting form, but came on tremendously as a bowler, actually beating Blythe in the averages.

As a batsman Woolley, when well set, is one of the most attractive of left-handers-the cleanest driver since F.G.J. Ford-but he often starts badly and there is something wanting in his defence. His natural powers are great, but it ought to be a harder matter than it is to bowl him out. However, though he can look back upon five seasons of first-class cricket he is quite young enough to overcome his weakness. If his defence were equal to his hitting he would be at the top of the tree. As a bowler, he began by modelling his style closely upon that of Blythe, but of late he has gained much in individuality. He makes good use of his height – he must be well over 6ft – and bowls with an easy swing.

Frank Woolley became one of the game’s greatest batsmen, and more than removed any doubts about his Test-match temperament. He scored a staggering 58,959 first-class runs at 40.77 with 145 hundreds. He also took 2,066 wickets at 19.87.