Frank Foster had a brief but sparkling career for Warwickshire and England. His Wisden obituary revisited his career.

Frank Foster was one of the most prominent all-rounders of his day – a fine left-arm fast-medium bowler and a forcing right-hand batsman. His career in first-class cricket was brilliant but all too brief, for it began in 1908 and terminated with the outbreak of war in 1914.

Nothing was known of him outside local cricket until 1908, when he played in five matches for Warwickshire, but his natural aptitude for the game was such that he at once jumped into front rank and two years later figured in Gentlemen v Players matches at Lord’s, The Oval and Scarborough. In all three games he showed such ability that several famous cricketers unhesitatingly described him as obviously a man who would play for England.

Indeed, J.T. Tyldesley, after batting against him the previous year, expressed the view that a new left-arm bowler of exceptional ability had been discovered. In 1910, Foster made nearly 600 runs and took 91 wickets for his county, but up to that time he was regarded as little more than a bowler.

The summer of 1911, however, found him by general consent the best all-rounder of the year. Soon after being elected captain of Warwickshire, he announced his impending retirement, but he was induced to reconsider his decision. Such wonderful cricket did he play, making 1,383 runs, average 44, and taking 116 wickets for just over 19 runs apiece, that his individual efforts constituted the chief factor in gaining the County Championship for Warwickshire for the first time in their history.

The magnitude of this achievement may be understood when it is mentioned that 1911 was the only year since 1872 that the title had not been carried off by one of the “Big Six” – Yorkshire, Lancashire, Nottinghamshire, Surrey, Kent and Middlesex. Heading the batting and bowling figures and setting a fine example in the field, Foster, as a match-winner, stood out as the best young captain seen since W.G. Grace in the early days of Gloucestershire. During that memorable season, Foster played a three-figure innings in each match with Yorkshire and one of 200 against Surrey at Edgbaston. 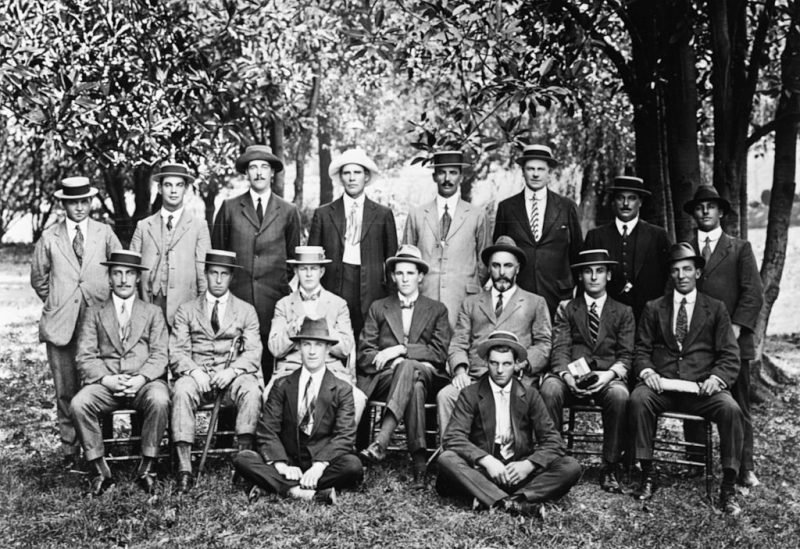 The MCC side prior to their 1911/12 tour of Australia. Foster is at the centre of the middle row

The following winter he formed one of the team to Australia taken out by P.F. Warner but, owing to the captain’s illness, led on the field by J.W.H.T. Douglas. England lost the First Test match, but won the other four largely owing to the splendid bowling of Sidney Barnes and Foster. In the series, Foster obtained 32 wickets for less than 22 runs each.

Returning home, Foster appeared for England in the ill-starred Triangular Tournament, but, except in the first engagement with South Africa, when he took eight wickets for 60 runs, accomplished little worthy of his reputation, all the bowling honours going to Barnes. During that very wet summer Foster scarcely maintained his form – possibly three strenuous seasons in the course of 16 months were too much for a man of 23.

Early in 1913, when he seemed to have lost much of his fire and spin, he had to take a rest and although he obtained 91 wickets, these cost 24 runs each. Yet he was quite himself again in 1914, making 1,396 runs, average nearly 35, with a highest innings of 305 not out – scored in four hours 20 minutes – against Worcestershire at Dudley, and dismissing 117 batsmen, average just over 18. Then came the First World War, during which he met with a motorcycle accident that left him lame and destroyed any possibility of him ever again being an effective bowler.

Distinctive and individual in bowling method, Foster possessed an easy, natural action, commanded considerable swerve and imparted so much spin to the ball that he generally gathered pace from the pitch. He was one of the originators of leg-theory and often employed only three men on the off-side. As a batsman he was brilliant as well as confident and if he did not play with quite a straight bat and took many risks, he was the personification of youthful energy and so a most attractive figure on the field. In the course of his first-class career, he took 721 wickets for a little over 20 runs each and scored 6,510 runs, average 26.