After a sensational start to his England one-day career and his successful Test debut, Eoin Morgan was a Wisden Cricketer of the Year in 2011.

High-quality cricketers have emerged from the unlikeliest of places but very few people, if any, would have predicted that a housing estate in north County Dublin would give birth to one. But it was here, within hitting distance of the Irish Sea, that Eoin Morgan took his first steps to becoming England’s finest limited-overs batsman and, arguably, the most versatile in world cricket. Without him to keep their batting afloat in the early stages, it is safe to say that England would not have won their first global trophy, the World Twenty20 in 2010.

Morgan had shown immense promise since joining Middlesex as a teenager, but it was at Canterbury on May 11, 2009, that he confirmed his exceptional talent. Morgan scored 161 off just 136 balls in a 50-over game against Kent, one of the most awesome displays of limited-overs batting you are ever likely to see. What stood out was the composed and controlled way in which he constructed his innings. There was no slogging, just wonderfully crafted shots that allowed him to score all around the ground. Wherever the Kent captain Robert Key moved a fielder from, the ball duly went. 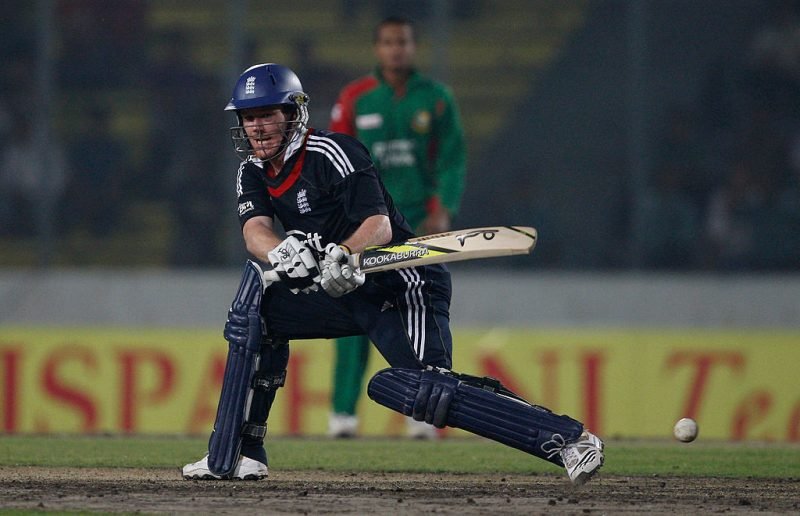 One of the highlights of his display was the array of reverse sweeps. There was a rhythm and cleanness of hitting to this innovative shot that few had seen before, and nobody can currently match. Morgan’s quality was not missed by the selectors, who handed him his England one-day international debut 13 days later against West Indies at Bristol.

Morgan is not the first young Irishman to have made the journey from humble Dublin club cricketer to England star via the Ireland national side and Middlesex. Ed Joyce had paved the way several years earlier. But where Joyce hesitated, Morgan stormed through like a juggernaut.

"Playing lots of sports, not specialising in one, was I believe the biggest influence on having an eye for a ball”

Morgan had sported the green of Ireland in 23 one-day internationals before wearing the blue of England, and it did not take him long to feel at home in his new surroundings. On his sixth appearance for England he struck 58 off just 41 balls against Australia at Trent Bridge. That performance was backed up with 62 not out against Sri Lanka and 67 against hosts South Africa in the Champions Trophy in September 2009.

A maiden hundred for England soon followed, against Bangladesh at Mirpur, and again it was a memorable performance. Most modern batsmen celebrate hugely when they reach three figures for the first time (although he had scored 115 for Ireland in a one-day international against Canada in 2007), but Morgan showed little emotion, as England were yet to complete victory. It was only when he won the close game with a six that he celebrated. Further undefeated hundreds, each at more than a run a ball, followed against Australia and Pakistan. The message was becoming clear: when Morgan gets in, he scores heavily and quickly, and more often than not wins his side the game. 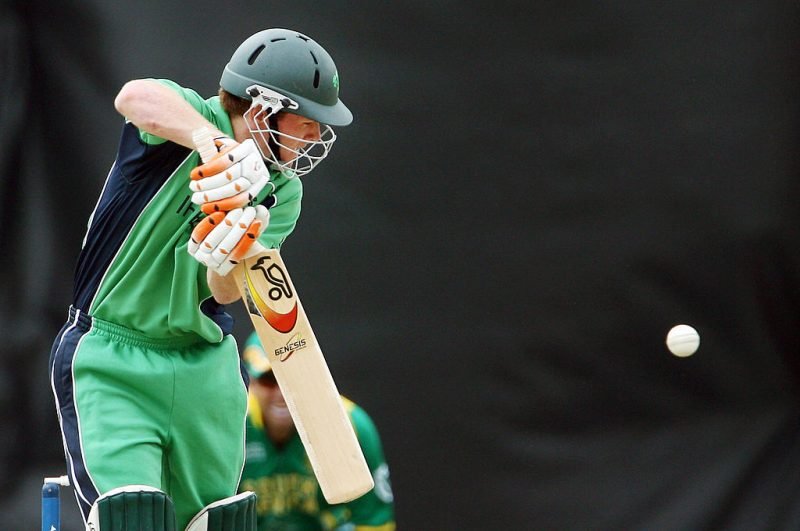 The manner in which he had been able to adapt to match situations encouraged the England selectors to give him a Test debut against Bangladesh at Lord’s. Morgan scored 44, and quickly topped that with a majestic 130 against Pakistan in just his third innings, as he dominated a stand of 219 with Paul Collingwood at Trent Bridge.

Eoin Joseph Gerard Morgan was born in Dublin on September 10, 1986. In a city where football, rugby, Gaelic football and hurling tend to catch the eye of young sports enthusiasts, Morgan, surprisingly, was born into a family of cricket fanatics. The passion came from Jack Morgan, Eoin’s great-grandfather, who fell in love with the game when he lived in England. The affection was passed through generations via Eoin’s grandfather Sonny and his father Jody. As a youngster Eoin was never short of bodies to play cricket with: older brothers Gareth and Gavin, who played for Leinster, were cricket mad, as were sisters Laura and Gwen, who have both played for Irish representative sides.

Morgan’s early cricketing experiences were either at Rush Cricket Club in Dublin or on a concrete path in the St Catherine’s housing estate. Stories of his hitting and performances against men as a 15-year-old have become legend in the area. 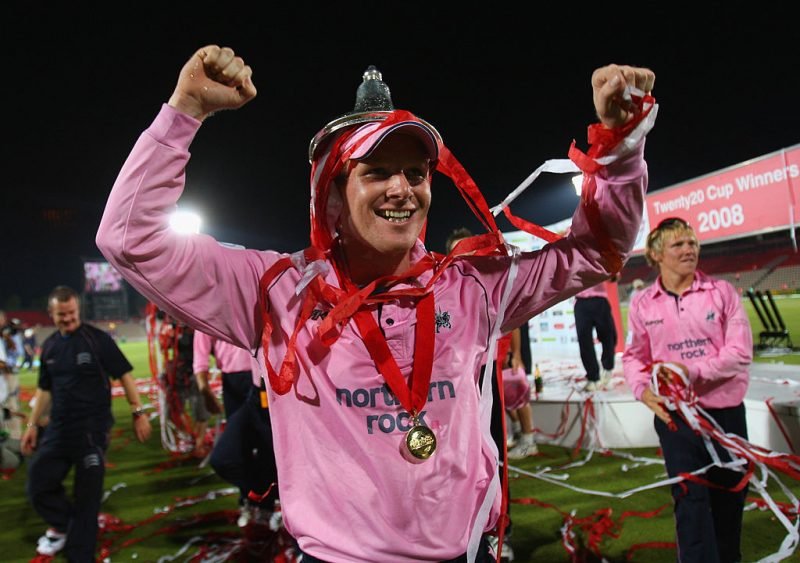 Eoin Morgan celebrates after Middlesex won the T20 Cup in 2008

Middlesex became aware of him in 2001 when Jason Pooley, the Second XI coach, received a phone call from an Irish contact who said he should go and watch a young lad playing for Ireland’s Under 15s against England Under 13s at Eton College.

Morgan only scored around 20, but made an instant impression on Pooley: “He was small, but you could see straight away that he had real natural talent,” he said. “It was hard to put your finger on what he had, but during my playing career I spent many hours at the other end watching Mark Ramprakash bat so I knew what a good player looks like, and Eoin had something special.

“There was a calmness about his batting. He made it look so easy, and he struck the ball beautifully. It wasn’t strength that got the ball to the boundary, it was timing. He was wristy and wasn’t afraid to hit the ball over the top. I met his father, and we arranged for him to come over to spend time with Middlesex during the summer and stay with an Irish lady in Finchley. He was very mature at a young age. At the age of 14 or 15 he would think nothing of flying over from Ireland on his own. I would meet him at the airport; he would pick his bag up, jump in the car and just get on with it. From an early age he knew what he wanted to do, and that was to play cricket.”

Many believe it was the fact that Morgan played hurling when young which allowed him to develop the dexterity for such a wide array of strokes. But he knocks down that idea, saying it was the wide variety of sports that helped him. “I played pretty much every sport when I was young – football, Gaelic football, rugby and hurling,” said Morgan. “I was not particularly academic at school, in fact if I hadn’t played sport I would have left when I was 16. Hurling obviously contributed to my hand-eye co-ordination, but it was not a major thing. I just always played sport, and playing lots of sports, not specialising in one, was I believe the biggest influence on having an eye for a ball.” 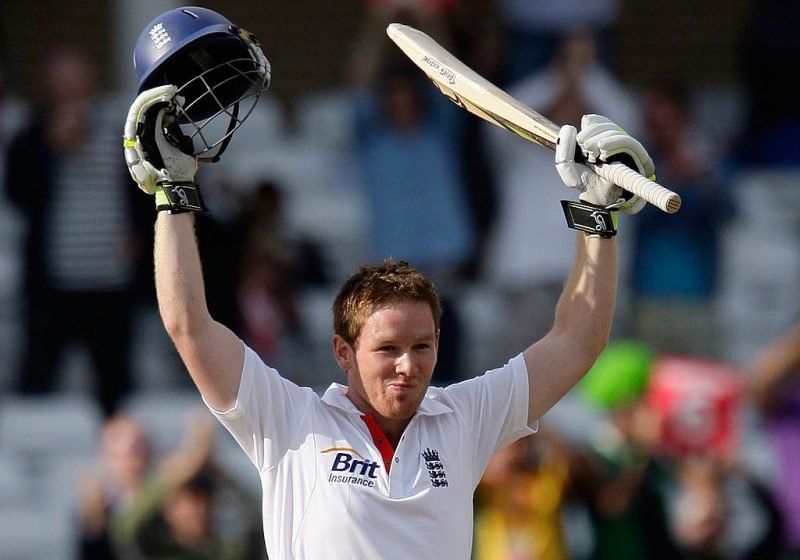 Eoin Morgan celebrates his maiden Test century against Pakistan in 2010

The reverse sweep has become the shot Morgan is most famous for, but it is not a stroke he worked on before representing Middlesex. “Up until I was 18 or 19 I didn’t reverse-sweep,” he said. “I only started when I began playing Twenty20 for Middlesex at Lord’s. I couldn’t hit the ball over the straight boundaries so I had to learn to score in different areas, so I began practising shots that opened up these areas. I found playing the sweeps and reverse sweeps quite easy, but I also worked very hard at it.”

Morgan’s change of allegiance was, understandably, not greeted with universal approval at home. Irish cricket had recently lost the services of Joyce, and now the English were pinching another one of their brightest prospects. The move to England, however, did not have a huge effect on Morgan himself. “It has been an easy transformation,” he said. “I was 15 when I first came over to play properly, and 16 when I was offered a summer contract. I played for the South of England when I was 17. I still follow the Ireland results closely and Will Porterfield, the Ireland captain, is one of my closest friends.

“The last year has been brilliant. I have outdone myself in all areas and being rewarded with a couple of Tests was unbelievable.” The Eoin Morgan story is still in its infancy, but the early signs are that it will be a fast-moving, page-turning best-seller.