Don Tallon was one of Australia’s greatest wicketkeepers and brilliant on the 1948 Invincibles tour. His Wisden obituary recalled a great career.

Unlucky not to be chosen to tour England in 1938 – his omission caused quite a stir – Don Tallon had to wait until after the war, in which he did Army service, to become established in the Australian side. Unusually tall for a wicketkeeper (5ft 10½ in) and very slim, he yet crouched low behind the stumps. He was a man of few words (partly, perhaps, because his hearing was not good) and of quick, neat movement of the gloves.

Born in Bundaberg on the Queensland coast, he made his first appearance against an English side for a Queensland Country XI at Toowoomba in 1932/33, when he was 16. He stumped Sutcliffe. He first played for Queensland a year later and was still only 19 when he scored 193 for Queensland against Victoria at Brisbane in 1935/36, the highest of his nine first-class hundreds. He was Queensland’s leading batsman that year, with 503 runs at an average of 55.88.

By the outbreak of war he had equalled E Pooley’s long-standing world record of 12 victims in a match (it has yet to be beaten) for Queensland against New South Wales at Sydney, this in the 1938/39 season. He had six in each innings, catching nine of them and stumping three. Seven dismissals in an innings for Queensland against Victoria at Brisbane a month later was also, at that time, a world record, though shared with several others.

The first of Don Tallon’s 21 Tests was Australia’s first after the war, against New Zealand at Wellington in March, 1946 (it was not granted Test status until 1948); his first victim came from a stumping off O’Reilly. Having made the wicketkeeping place his own against England in 1946/47, and established what was then a record 20 victims in the series, he was an integral part of Bradman’s brilliant 1948 side in England, being equally at home whether keeping to the speed of Lindwall and Miller or the spin of Johnson, McCool and Ring. He had wonderful timing behind the stumps and exceptionally fast hands when it came to taking off the bails.

Perhaps his most famous catch was at The Oval in 1948, when he dived down the leg side to dismiss Hutton for 30. He caught an authentic leg-glance left-handed and at full stretch – “a great finish to Australia’s splendid performance”, wrote Wisden, Hutton being the last man out and England’s total a mere 52. Tallon came to England again in 1953, but he was 37 by then and no longer quite the supreme craftsman he had been. Having played in the first Test, he gave way to Langley.

His rugged weathered features helped to make him seem a typical Australian to many English cricket followers. In the few years after the war he was looked upon almost with awe. Bradman was of the opinion that as a wicketkeeper he was the equal of the great Oldfield, to whose coaching Tallon acknowledged a considerable debt. 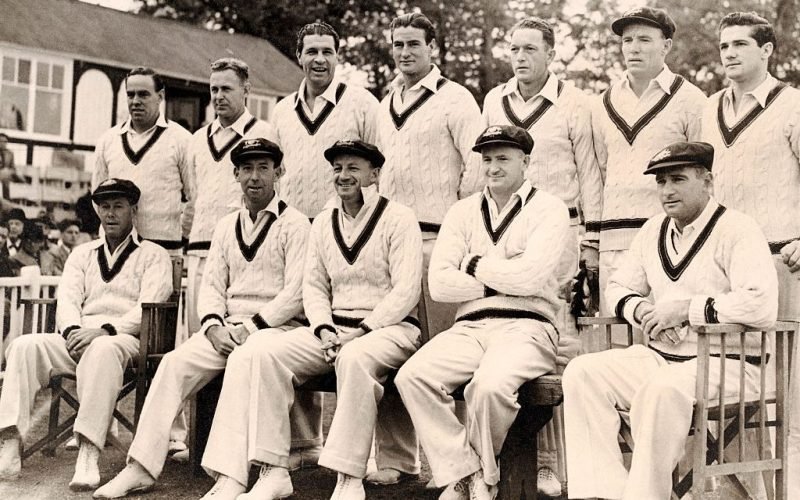 “The Invincibles” – the Australian cricket team in England, circa April 1948. Don Tallon is standing fifth from right

Lindwall and Miller both rate Tallon as the best they ever saw. His unavailability to tour South Africa in 1949/50 deprived him of one full series, but his Test victims numbered 58 (50ct, 8st). All told he claimed 432 first-class victims, no fewer than 129 of them being stumped, Australian cricket at that time being well endowed with leg-break bowlers.

Tallon’s batting record in Tests was disappointing, partly no doubt because in such a strong and all-conquering Australian side runs were seldom needed from him. His best Test score was his 92 against England at Melbourne in 1946/47, when he and Lindwall added 154 for the eighth wicket. In first-class cricket he scored 6,034 runs (average 29.18), in Test cricket 394 runs (average 17.13).