Derek Shackleton was one of the greatest English seamers, even if Test success proved elusive. He was a Wisden Cricketer of the Year in 1959.

Derek Shackleton has been one of the most successful bowlers in England for the past ten years. Perhaps he has been a little unfortunate in gaining only three Test honours, but in county cricket he has few peers and his form has remained remarkably consistent. Last season was his best on figures and, taking 165 wickets, he played a vital part in Hampshire’s spirited challenge to Surrey for the Championship. At the age of 34, Shackleton, a medium-fast bowler, sent down 1,321 overs, more than anyone else in the country, and only Lock, with 170, took more wickets.

In the early years after the war when Alec Bedser reigned supreme, Shackleton, a bowler of similar pace, naturally found his representative chances limited. In more recent seasons England have been blessed with a fine array of fast bowlers, so again Shackleton had to stand down when Test sides were chosen, but he has taken this all with a splendid spirit and he continues to give of his best for Hampshire.

Shackleton is an impressive personality on the field. Fairly tall, good-looking with neat dark wavy hair, he always looks clean-cut and immaculate. He takes little out of himself in his smooth approach to the wicket and his high action and follow-through are models which could well be copied. In his earlier days, Shackleton bowled a little faster than he does now. Lately, he cut down his pace to just above medium, but perhaps his greatest asset is his beautifully controlled swing, either way. To this, he adds unerring accuracy, clever variation of pace and a willingness to experiment, so that the best of batsmen find him a formidable foe.

They never know what type of ball to expect next and even when well set they have to keep constantly alert. Without any apparent change of action, Shackleton can hold back the ball, push it through at greater speed, bring it back, make it run away or occasionally try that awkward ball which comes fast and straight to the top of the shoulder, in cricket parlance, a beamer. It requires quickness of thought and reaction on the part of a batsman to avoid giving a catch on the leg-side.

As a batsman, Shackleton is happiest when hitting the ball hard and often and when set he is a powerful driver. His highest innings came in 1949, 87 not out against Essex at Bournemouth, but he has many fifties to his credit and hardly a season passes without a few good scores coming from him. 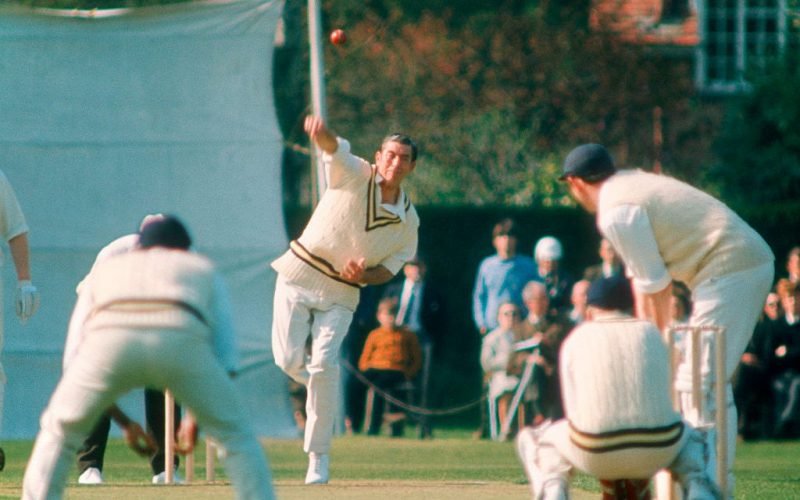 Shackleton bowling for Hampshire during the 1969 Player’s County League match against Somerset, in his final year for the club

Curiously, he has had more success as a batsman than with the ball for England. He first played against West Indies at Nottingham in 1950. Going in when England were 105 for six, he made 42, top score in the innings. Unfortunate to come up against Worrell and Weekes at their best, Shackleton took only one wicket in the match for 135 runs. The following year he helped England beat South Africa at The Oval, but his contribution was confined to one wicket for 39 runs. Chosen for the tour of India, Pakistan and Ceylon in 1951/52, he took 51 wickets in first-class matches, more than any other bowler, but played in only one of the five Tests against India. His other tour was for the Commonwealth side to India in 1950/51.

Born on August 12, 1924, at Todmorden in Lancashire, Shackleton was educated at Roomfield Senior School, Todmorden. His first important cricket came for Todmorden at the age of 15 and he gave valuable service as an all-rounder for two years. At 18 he joined the Army and then began his association with the south and the reason for Hampshire engaging him. Sam Staples, the Hampshire scout, spotted Shackleton’s promise while he was playing for the Southern Command (Didcot) and in 1947 the county gave him a trial as a batsman. Later that year, on leaving the Forces, he signed as a professional.

He made his first-class debut in 1948 with moderate success, but the following year Hampshire realised that they had found a player of outstanding ability, for Shackleton missed the double by a narrow margin, taking 100 wickets and scoring 914 runs. While Shackleton’s batting fell away slightly over the years, his bowling steadily improved and in every season from 1949 to 1958 he took at least 100 wickets. In those ten years, he claimed 1,349 victims in England.

Shackleton’s rise as a bowler had strange beginnings. While playing for Todmorden at Colne he was asked by his captain: “Do you ever bowl?” “Yes, a bit in the nets,” came the reply. Shackleton went on and with medium-paced bowling, took four for nine. A little later, using the new ball against Nelson, he captured five for 30.

Shackleton changed his style to leg-breaks in the nets at Hampshire and EDR Eagar, his captain, on the search for bowlers, saw him get several balls past the bat. Shackleton had joined the staff primarily as a batsman, but Eagar told him he could be a great asset to the county as a bowler. A Hampshire committee man suggested that Shackleton varied his leg-breaks with a few seamers and so successful was he with this method that he changed his style permanently. 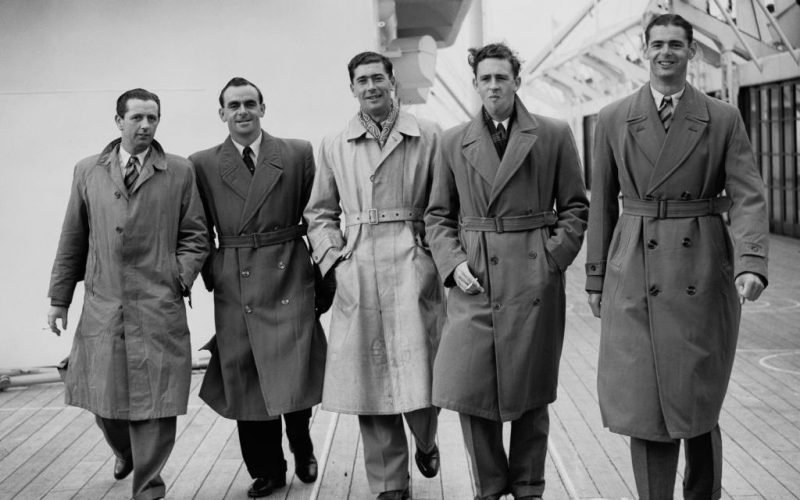 The MCC Cricket team members arrive back at Tilbury after a five-and-a-half month tour of the subcontinent in 1951/52. Left to right: Albert Rhodes, Fred Ridgeway, Derek Shackleton, Brian Statham, and Roy Tattersall

Shackleton has many great performances to his credit, his best on figures alone being nine for 59 against Gloucestershire at Bristol last season, but one of the memories he will cherish most also came last year when he took seven for 34 in the first innings against Surrey at Guildford, and among his victims was Peter May, whom he beat neck and crop.

In Shackleton’s words: “Everything went up in the air – Peter’s head, the bat and the lot. It was a wonderful moment to get his wicket.” But Shackleton has no hesitation in declaring that May is the best batsman he has ever bowled against. Another match Shackleton remembers most was also against Surrey, this time for MCC at Lord’s in 1956. He says: “I was beating the bat all the time, bowling as well as I ever did, but just shaving the stumps. All I managed in the first innings was two for 69.” Shackleton did not add that his second innings four for 27 helped to beat Surrey by 55 runs.

He is like that. Modest off and on the field, he has asked nothing more from the game than to make good as a county cricketer and to want to play it all his life.

Also a useful footballer, Shackleton was on the books of Burnley as a goalkeeper in 1943, but cricket was his great love and he dropped his soccer ambitions. He married an attractive Todmorden girl and they have two young children. Of his son Julian Howard, Shackleton states: “At the age of six he is as keen as mustard and not shaping too badly with the bat.” If his son becomes anywhere near as good as his father, cricket will be well rewarded.

Derek Shackleton carried on taking wickets for Hampshire until 1969, finishing with 2,857 first-class wickets at 18. But he played in only seven Tests