Dennis Amiss overcame a moderate start to his Test career to become a prolific opener. He was a Wisden Cricketer of the Year in 1975.

In the early summer of 1972, it seemed that Dennis Amiss, then aged 29, might well be lost untimely to the game. First Kanhai, then Kallicharran had joined Warwickshire; Alan Smith, the Warwickshire captain, had six contenders for the five places available for specialist batsmen: they were Jameson, Whitehouse, Kanhai, MJK Smith, Kallicharran – and Dennis Amiss. Alan Smith was confronted with the unanswerable fact that six into five won’t go, and, Amiss, unable to strike form in the early weeks of the season, had to be left out of the side.

During those bleak days, for Amiss, a man of inflexible sense of purpose, the problem was not whether he would get back, but how he could get back. He was keen to chance his arm as an opening batsman, and in mid-June he was given the chance of opening the Warwickshire innings with John Jameson against Middlesex.

Dennis Amiss took his chance, and his 151 not out was the turning point. In July, he scored 156 not out against Worcestershire, 192 against Lancashire, when he shared a second-wicket stand of 318 in three hours with Kanhai, and a match-winning, hurricane 121 not out against Kent. Warwickshire ran away with the Championship, and Amiss finished top of the Warwickshire batting averages, his 1,129 runs averaging 66.41.

At the end of August, he played with exhilarating confidence in the three Prudential Trophy games, scoring a brilliant century at Old Trafford and receiving the award as the England Man of the Series. Not surprisingly, he was chosen for the MCC party to tour India and Pakistan in 1972-73.

Dennis Leslie Amiss was born in Harborne, Birmingham, on April 7, 1943 and was brought up in Yardley. His father, A.V. Amiss, was a good club cricketer, and Dennis soon learnt how to handle a bat. Warwickshire became interested in him in 1957, when he made 60 for Oldnow Road School in the final of the Docker Shield competition, and the following year, at 15, he became associated with the county. 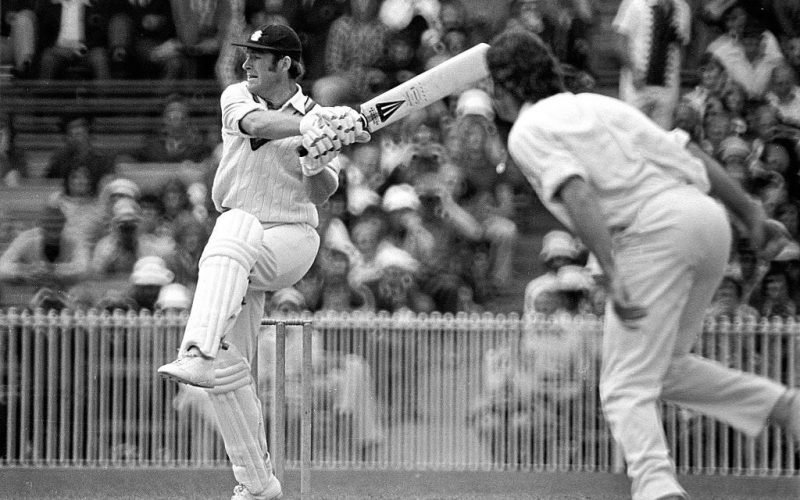 Dennis played his first game for Warwickshire in July, 1960 against Surrey at The Oval. He did not bat; in fact, in that match, only Horner and Ibadulla did bat for Warwickshire, sharing an unbroken partnership of 377 for the first wicket, thus providing the 17-year-old boy from Yardley with some admirable instruction in the art of run-getting.

In the next few years, he learnt a lot about the game from the evergreen Tiger Smith, from Tom Dollery, who had skippered the 1951 Championship side and later became senior coach, and from Derief Taylor, whose work as a coach has gained him a legendary reputation at Edgbaston.

In August, 1966, Amiss scored 160 not out for Warwickshire against the West Indies; a few days later, he was chosen to play against them in the fifth Test, and he made 17 in his first match for England. In 1967, he scored his first century in a County Championship match, going in at No.3 against Nottinghamshire at Coventry and making 176 not out. He now became an established player in the No.3 position, and was easily top of the Warwickshire averages, at 54.78; Bob Barber, who was second, had an average of 35. During that season, Amiss played in three Test matches, two against India and one against Pakistan, but success eluded him.

The Australians came over in 1968, and Dennis Amiss played in the first Test at Old Trafford. He had an unhappy game, and bagged a pair. “Amiss, who virtually filled Barrington’s position,” said Wisden, “failed in both innings through not playing in his normal attractive way; instead, he tried to imitate Barrington’s grim defence.” 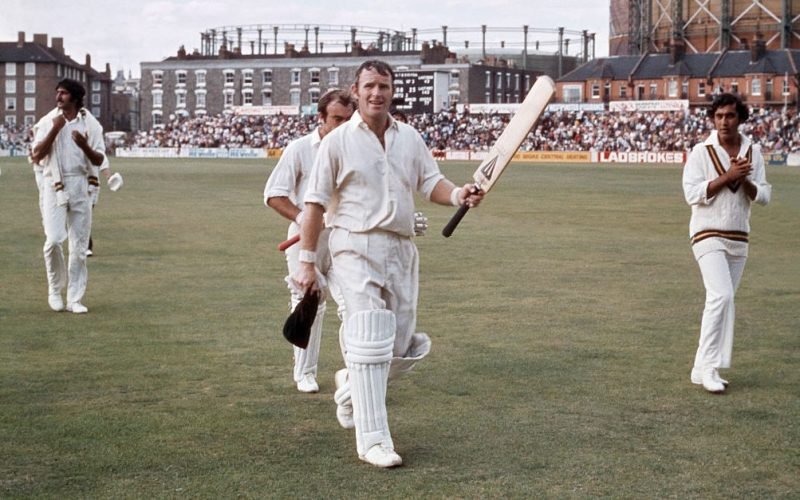 The disaster at Old Trafford may well have affected his confidence. It was not until the end of the season that he fully recaptured his form with masterly centuries against Worcestershire and Kent: even so, his batting average for Warwickshire dropped to 33.30. The period from 1969 until mid-June 1972 was one of comparatively modest achievement: then came the innings against Middlesex.

Dennis Amiss played in the first three Tests against India (1972-73) but he scored only 90 runs in six innings, and was left out of the last two Tests. He had done some hard thinking about the hair’s breadth that often lies between failure and success in batting, and when Bedi and the other Indian spinners offered to give him a net, he leapt at the opportunity to practice his natural free-hitting game, against an imaginary array of close fielders. This net practice, plus the fact that he had now come to terms with himself as an England batsman – “I was determined to go out and play my strokes” – resulted in the second major breakthrough.

“If it had been a fraction nearer I might never have gone on that tour to India and Pakistan.”

It was in February, 1974, in the second Test match against the West Indies, at Sabina Park, Kingston, Jamaica, that Dennis Amiss played the innings that has put him in the ranks of the great cricketers. Facing a first-innings deficit of 230, England scored 217-5 (Amiss 123 not out), in their second innings when the last day’s play began. Dropped off the third ball of the last day, Amiss played with composed, steely concentration for the remainder of the match, eventually scoring 262 not out, and, with England 432-9, the match was saved.

Related Story: Johnny Tyldesley: A batsman of enterprise, and a model of consistency – Almanack

A front-foot batsman with strong forearms, Amiss plays with a heavy bat. His favourite stroke? – picking up a good length ball off the toes, and flicking it, with plenty of right arm, somewhere between mid-wicket and fine leg. His batsmanship has sometimes been described as savage, more often as rapier-like. He has been compared with Barrington for his pertinacity, with Boycott for his dedication, and with Graveney for his crisp elegance.

Equable, modest, quietly confident, Dennis Amiss has the rare gift of being self-analytical without being in the least self-absorbed. He discusses his play with complete objectiveness: “I made up my mind to play my strokes, and if I was out bat and pad, it didn’t mean it would happen the next time. Again – when I played in the Prudential Trophy match at Old Trafford, the first ball I had from Bob Massie just missed my glove. If it had been a fraction nearer, I might never have gone on that tour to India and Pakistan.”

Fortunately for English cricket, it wasn’t – and he did.