Dean Jones was one of a number of new stars to emerge in the 1989 Ashes series. His performances that summer earned him a Wisden Cricketer of the Year award in 1990.

Dean Jones’s hopes for a successful first Ashes tour of England might have been ruined at Hove only 10 days into the four-month visit. Aiming to hook a bouncer from Sussex’s Tony Pigott, he missed and suffered a fractured cheekbone. Jones left the ground for an X-ray, but on his return insisted on resuming his innings. A player who thrives more than most on confidence and the rush of adrenalin that comes with it, he said of his prompt return: “If you fall off a horse, the best thing is to get back on as soon as possible.” As if to emphasise his aggressive talents as well as his bravado, he immediately struck a six off Tony Dodemaide, his Victorian team-mate who was playing for Sussex.

Jones is highly talented, competitive and proud, a man whose behaviour has, in the past, tended to be impulsive rather than calculated. Unlike, say, Geoff Marsh, who works the percentages by taking the middle road, Jones lives more towards the edge. And because he takes risks that many would see as extreme, the difference between success and failure is greater. Before the 1989 Ashes series, his Test career encompassed two double-centuries, an unbeaten 184 against England at Sydney, and several stretches of lost form. 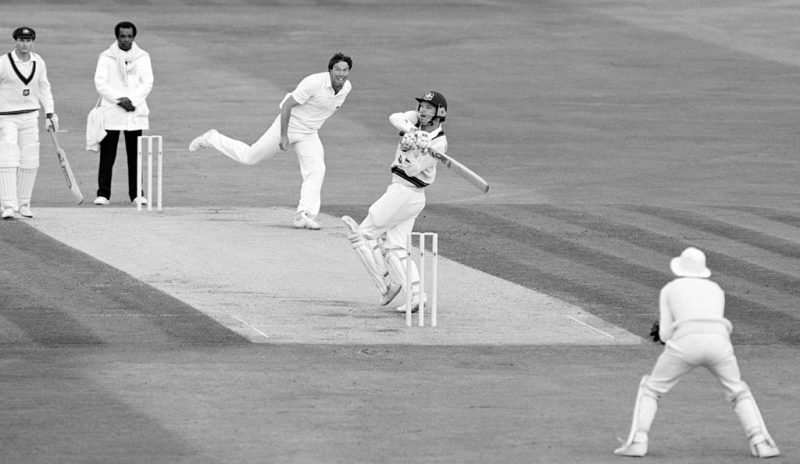 In only his fifth Test innings, he scaled the heights with a remarkable 210 in the tied Test at Madras in September 1986. He was ill while at the crease, and afterwards, recovering in hospital, could recall little of the second half of the innings. This performance, courageous almost to the point of foolhardiness, suggested great things would follow, but there were also patchy periods.

His worst slump began when he returned to the subcontinent in September 1988. On the three-Test tour of Pakistan, his usual confidence deserted him as he faced the spinners on turning wickets. Additionally, there was the problem of the Victorian captaincy. After leading his state in 1987/88, Jones had asked to be relieved of the position as he thought it had adversely affected his batting. By the time he arrived in Pakistan, he was having second thoughts, but the state selectors thought otherwise and appointed Simon O’Donnell.

Jones averaged 8.80 for the Pakistan series, and his poor form continued in the Australian season that followed. Indeed, his first first-class score of 50 or more came in the fifth Test, when he made 216 against West Indies at Adelaide. He had regained his place in the Australian team only because the World Series Cup matches were played in the middle of the Test series, and the national selectors had hoped his one-day prowess had not been affected as much as his abilities at the longer, more demanding first-class game. Even so, he was retained for the last three Tests as much for his potential as for the runs he had scored. The selectors reaped due reward with that double-hundred, which in turn secured Jones’s place in the tour party for England.

Dean Mervyn Jones was born on March 24, 1961 at Coburg in Melbourne. In his early teenage years he joined the strong Carlton club, where his father, Barney, had built a reputation as a talented all-rounder with a fierce competitive attitude. Jones, along with his two younger, cricket-playing brothers, learned the game in a hard school. His major early influence at Carlton was the former Australian opening batsman, Keith Stackpole, another with a reputation as a formidable opponent.

Dean Jones first played for Victoria in 1981/82, and while his early years were marked by occasional flashes of brilliance, too often his batting was marred by the natural impetuosity of youth and his own arrogant impatience. There was no doubting his natural gifts. The question was whether he could find that fine balance between discipline and natural exuberance. He made his Test debut in March 1984 at Port-of-Spain, and at the start of the 1989 Ashes series had played in 21 Tests for 1,546 runs at 45.47. It was a fine record, but because of his poor form in the previous two series, he left for England with major doubts still surrounding him.

Although the pair were complete contrasts in batting style, Boycott recognised in Jones the single-minded desire for success that had driven his own career

Although his excitable temperament suggested he might not have been able to overcome failure, Jones’s desire to prove himself carried him through. He was not too proud to seek advice from older players, and he chose his sources wisely. Bob Simpson, the Australian coach, described the Victorian as probably the most naturally gifted batsman in Australia and was shrewd enough not to interfere too much with that natural talent, mainly advising Jones, along with other Australian batsmen, to change to a lighter bat to gain more control.

Jones also sought the advice of the former England opener, Geoff Boycott. Although the pair were complete contrasts in batting style, Boycott recognised in Jones the single-minded desire for success that had driven his own career. Play straight and trust yourself was the essence of Boycott’s message.

In the first Test, batting at No.5 rather than No.3 where he had played in most of his previous Tests, Jones showed his growing maturity and versatility by playing second fiddle firstly to Mark Taylor and secondly to Steve Waugh. Jones likes to dominate, to take centre stage, but at Headingley he impressed with selfless running between the wickets that gave the strike to team-mates who were in excellent touch. His own contribution of 79 in the first innings emphasised the depth of the Australian middle order, but it was only a taste of things to come. 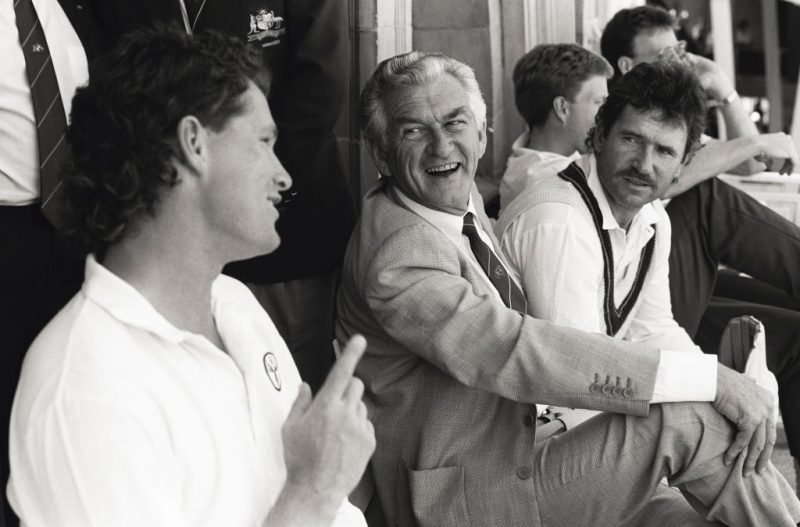 Dean Jones with Bob Hawke (centre), the Prime Minister of Australia, and Allan Border (right) on the Lord’s balcony, June 23, 1989

In the third Test, at Edgbaston, he dominated the England bowlers in making 157. During that innings he often played across the line towards midwicket, a practice which in earlier days had brought him trouble. Now it was a measure of his assurance, and he explained it by saying he was playing the length rather than the line. If it was full enough, he hit where he wanted. In his one innings in the fourth Test, however, he was deceived by a quicker in-swinger from Ian Botham and was bowled trying to play to mid-wicket once too often. His 69 could otherwise have been another comfortable century.

Having missed out at Trent Bridge after the record-breaking opening stand of 329 between Mark Taylor and Geoff Marsh, Jones needed a big score at The Oval to complete the excellent series he had set his heart on to erase the disappointment of being omitted from the 1985 Ashes tour. He made a technically superb 122 in the first innings, widely regarded as his best effort of the series, and an even 50 in the second.

Before the tour, Jones had set himself the goal of scoring five first-class hundreds. He achieved this by making two in the Tests; a stunningly powerful 248 against Warwickshire, the highest first-class score of the 1989 English season; 167 not out against Gloucestershire made in equally dominant fashion; and a tightly controlled 128 against Kent on a seaming wicket. He finished fourth in the Australian Test average with 566 runs at 70.75, while in all first-class matches his aggregate of 1,510 was second only to Taylor’s, and he topped the average at 88.82.

Related Story: ‘No thank you, no nothing’ – Dean Jones on his sudden Australia retirement

Throughout his career, Jones has worn his heart on his sleeve. His struggle to adapt his temperament to the demands of Test cricket has been obvious for all to see. On the 1989 tour, he moved much closer to finding that balance which had eluded him in his early years. But, like most players who have been through difficult periods, he has learned enough not to rest on the laurels earned on one four-month tour. Cricket can be an ugly game, he said recently. Just when you think you might have established yourself, it will turn around and bite you again. The next time that happens to Dean Jones, he will know how to bite back.