Paul Edwards reflects on the charm of watching first-class cricket in county outgrounds, and traces how the trend has been changing over the years in the Wisden Almanack in April 2020.

Early on June 30 last year, queues appeared outside two grounds. The first, at Edgbaston, was what you would expect: England were playing India in the World Cup. There was more surprise, and some delight, when followers of Lancashire and Durham formed a line on Sedbergh’s Loftus Hill, waiting patiently to bag the best seats on a ground that would soon claim to possess domestic cricket’s most spectacular first-class setting.

Sedbergh School was only one of five venues that hosted their maiden Championship match in 2019. Almost a fortnight before that morning in the Howgill Fells, Yorkshire had played Warwickshire at York’s effortlessly classy Clifton Park, their first match there since 1890. In May, Hampshire visited the Isle of Wight for the first time since 1962, hosting Nottinghamshire at the wonderful Newclose. It had been no more than pasture barely a decade before, until the late Brian Gardener spent £2m on his dream of bringing first-class cricket back to the island.

Hampshire won comfortably, though Liam Dawson missed the last three days in the abundant Medina Valley because he had been called up to England’s World Cup squad. And so, for nearly two months, the season offered parallel narratives: while the world’s best 50-over cricketers went about their business in the stadiums, the Championship visited many outgrounds, reminding older spectators of distant summers, when almost all counties took the game back to the schools and clubs that had provided them with players in the first place.

Thus Middlesex played at Radlett and at Merchant Taylors’ School, Northwood; Lancashire went to Aigburth, as well as Sedbergh; and Nottinghamshire’s return match against Hampshire, a rain-wrecked affair, took place at Sookholme, home of Welbeck CC (Nottinghamshire’s outgrounds tour also included Grantham, Tunbridge Wells and Scarborough). In May, Glamorgan went back to Newport after an absence of 53 years, entertaining Gloucestershire at Spytty Park, where the local club had moved in the early 1990s following the sale of Rodney Parade.

Glamorgan are a good example of a county who use outgrounds as much from preference as necessity: they play at Colwyn Bay and Swansea partly because they feel Wales’s first-class county should take games to the north and the west. Yorkshire members voted recently to double the number of four-day games at Scarborough (the attendance for the second day against Nottinghamshire was nearly 5,000), and Gloucestershire’s season would be duller (and less profitable) without the Cheltenham Festival. Last summer, that loyalty was repaid with two thrilling victories in three games. 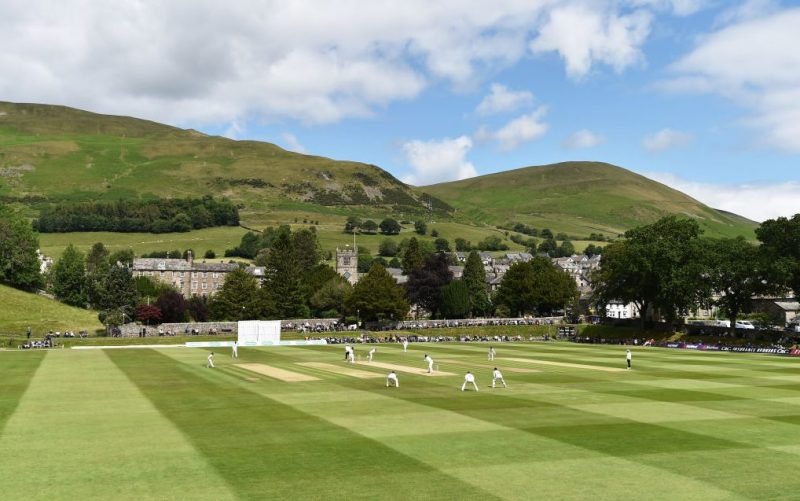 Of course, there was charm – and naturally there were cock-ups. Lancashire’s attempt to ease the burden on spectators travelling to Sedbergh by offering free return journeys by coach was marred when one vehicle arrived at the ground on the first day with over an hour to spare, but missed the turning into the car park, and found nowhere to stop in the small town. Instead of letting his passengers alight, the driver gave them an unwanted tour of Cumbrian byways for 50 minutes, at one stage returning south down the M6. For the Lancashire members who felt Sedbergh was a long haul from Manchester anyway, this did not help (although 1,486 spectators turned up on that first day, more than for any of the days of Lancashire’s subsequent Championship game, against Sussex at Old Trafford).

Play was occasionally held up by people using the public footpath adjoining St Andrew’s churchyard, behind the bowler’s arm. The school had decided the match was an event to be shared with the community, and did not request that the path be closed during the game. Home supporters concluded that, since spectators could sit there and watch without paying a penny, perhaps it should be renamed the Yorkshire End. (The town was in the county until boundary changes in 1974, and is still within the Yorkshire Dales National Park.)

There is a danger that such gentle intimacies might be misinterpreted as make-do-and-mend amateurism. Nothing could be further from the truth: the volunteers who organise outground matches perfectly understand their obligations, and venues are aware of the danger of losing a fixture because of a substandard pitch. Every aspect of infrastructure must be considered, and the catering for players and corporate guests professionally handled. Hosting a first-class match is both a privilege and a money-making opportunity: witness the vast marquee down one side of Clifton Park, and the tented village behind it, where York’s staff – keen to reciprocate the honour paid them – treated players and officials generously. In fact, many outground staff take a week’s holiday to work 14-hour days for nothing.

A dozen counties left their headquarters in 2019, and four-day games were played at 18 outgrounds. It would have been 17 but, when New Road flooded in June, Worcestershire moved their matches against Sussex and Derbyshire to Kidderminster, which had not hosted first-class cricket since 2008. They went off with few problems, and the resourcefulness of the Chester Road staff was widely praised. Other outground officials might have been praying they are never given such short notice: planning for most games begins in December, at the latest. Close to perfect: Hampshire host Nottinghamshire at the Newclose ground, on the Isle of Wight

It remains to be seen whether 2019 represents no more than a spike in a long-term trend. In 1965, Championship cricket took place at 51 outgrounds; Essex, Kent and Yorkshire each used six, and were effectively peripatetic. Only Middlesex (who in 2019 played host at five different venues) and Surrey stayed put. For spectators in the larger counties who found it difficult to make the journey to, say, Leeds, Manchester or Taunton, it was a golden age.

The decrease in outgrounds can be explained partly by the reduction in the Championship programme. Back in 1965, each county played 28 three-day games, which allowed most to take cricket away from HQ. Twenty years later, when each county played four fewer matches, 35 outgrounds were used. In 2000, after the counties first split into two divisions, each playing 16 four-day games, the figure was 21.

The first-class counties are much more than their headquarters and academies: they are an expression of local pride

This summer, only nine are scheduled for Championship use (the same as in 2018). However, many counties, particularly those with Test grounds, will play their 50-over cricket away from their base, because the big stadiums will be needed for The Hundred. Once again, the smaller venues will answer the call. Should the Championship in future seasons clash with the 100-ball jamboree, the outgrounds may yet be required on something like the scale of 2019 – and the high-summer months are more suitable for such games than the margins of the season.

If a few county executives would only realise it, there is a pleasing symbiosis here. The redevelopment of many stadiums – the distinction between a stadium and a ground seems ever more important – was not undertaken with four-day cricket in mind. Old Trafford and Edgbaston rock with excitement during major Tests or T20 clashes. Yet on the second afternoon of a Championship game, the atmosphere is slightly quieter. Why not take it to a place where it would be an event rather than a routine fixture? Certainly, most players enjoy outgrounds, not least because of the proximity of appreciative crowds. No one is arguing for the return of wandering counties, but many are intrigued by the possibility that each first-class side might play at least one four-day game away from their base. 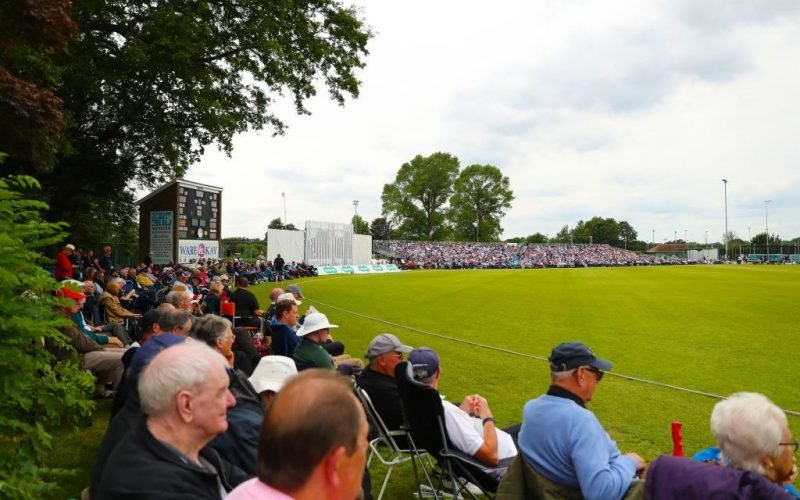 Home of the white rose: Yorkshire v Warwickshire at York

In doing so, they would be following the example set by New Zealand, who decided to stage England’s Tests over the winter at Mount Maunganui and Hamilton, two boutique venues. “The atmosphere at both will be akin to outground matches in the County Championship, and first-class cricket can be all the better for that,” wrote Mike Atherton in The Times. “Cricket was not designed to emulate football.” Atherton’s last point should receive consideration from one or two executives who know the cost of an outground match to the last penny, but not its value. Yet spending a few bob taking a game away from headquarters does more for a club’s long-term health than Kolpacking the squad with former internationals.

In a decade’s time, none of this may matter. Should the domestic game become the monopoly of an urban elite, the notion of county cricket will seem a quaint anachronism, and this article a romantic reverie. Already one or two counties are discreetly dropping the word “county” from their publicity, as if embarrassed by their history and raison d’ être.

Related Story: County Championship run-in: How are the title race, the relegation battle and the promotion push poised?

But if The Hundred is indeed the advance guard for a broader assault, then something precious will be gone for good. The first-class counties are much more than their headquarters and academies: they are an expression of local pride, for schools where the game is still played, and for thousands of clubs. It seems good manners for the counties to play the odd game in the sticks.

Few who watched Championship cricket at an outground last season thought they were being short-changed. They were content to follow the World Cup on their radios, or watch the evening highlights. In The Dalesman, the Sedbergh pub which became an unofficial mess for Lancashire’s match against Durham, players, spectators, scorers, umpires and even the odd journalist mixed happily. On those blessed midsummer evenings, it seemed they were sharing something more than a pint and their love of a game. “I only went out for a walk, and finally concluded to stay out till sundown,” wrote the naturalist John Muir, “for going out, I found, was really going in.”

Paul Edwards is a freelance cricket writer who works for, among others, The Times and the Southport Visiter. He has been a member of Southport & Birkdale CC since 1981.