Colin Milburn, a truly gifted batsman, was named a Wisden Cricketer of the Year in 1967 after a successful start to his Test career against West Indies.

On a mid-September day in 1959 at Sunderland that very fine judge, the late George Duckworth, watched with growing interest an unusually large seventeen-year-old schoolboy score 101 unusually good runs for Durham against the visiting Indians. Duckworth saw to it that the exceptional feat did not pass unrecognised, and one sequel was a paragraph, soberly headed “Colin Milburn”, in Notes by the Editor in the following edition of Wisden.

Milburn, who had been marking each passing birthday by adding a stone in weight, was described as a well-built lad. He was already 17 stones, and created no small surprise when he presented himself for a trial at Northampton.

Equally true was the Editor’s use of the words to describe the prodigy’s methods – “a fine attacking batsman”. Milburn is still large and his outline is some way from the popular conception of an athletic Test cricketer, but what is far more important in these days of stereotyped mediocrity, he remains an attacking batsman. When things go right it can be truthfully said to be violent attack. Twice in 1966 Milburn hit centuries before lunch.

While he was in Australia last winter he reached 100 in seventy-seven minutes for Western Australia against South Australia. It was the fastest first-class hundred seen at Adelaide since 1928/29 when PK Lee attained three figures in seventy minutes.

Milburn is both a scientific hitter and a character. There is little doubt that he inherited his bulk and style from his father Jack, a well-known professional in the Tyneside Senior League.

The young Milburn grew up in an atmosphere of cricket. While his father batted and bowled his, mother, Bertha, helped to serve the teas (and still does) at Burnopfield, where Colin was born on October 23, 1941. Burnopfield is a mining village in Co. Durham seven miles from Newcastle upon Tyne.

Though he had no coaching as such, his precocious aptitude and parental encouragement won him a place in Burnopfield’s 2nd XI when he was 11. By the time he was 13 he was opening the batting and bowling for the senior side. At the same age he was also chosen for Durham Schoolboys, and for two successive seasons played for the North against the south in the annual Schools’ representative match, at Northampton (appropriately) and Oldham.

Yet the youthful Milburn had little cricket at the Secondary Modern School at Annfield Plain. On Saturday mornings he was engaged in a milk round! Later a little more sophisticated Milburn, now at Stanley Grammar School, represented Durham Public Schools, scoring 285 runs, average 57.

Half-way through the 1959 season Milburn became properly restless and ambitious. He decided his many successes at Burnopfield were not getting him anywhere, and he moved to Chester-le-Street, members of the Durham Senior League.

At once he was a sensation. In three weeks he hit two centuries (one a score in the region of 150 being supported by a bowling performance of seven for three), and a near-century, and he was selected for Durham to play the Indians in the final match of their tour. It proved to be Milburn’s first and only appearance for Durham.

Several first-class clubs were now very much interested in him. On the recommendation of Bill Coverdale, a former player, Milburn had gone to Northampton for a trial in the Easter of 1959. He had also played once for Warwickshire’s 2nd XI, and twice for their Club and Ground.

Indeed a Warwickshire coach named Milburn as one of their two most promising players during a broadcast interview, which was heard by Mr. Ken C. Turner, secretary of Northamptonshire, while he has lying on the beach on holiday.

That was enough for the well-developed recruiting instinct of Mr. Turner, and Milburn finally went to Northamptonshire in April, 1960, having been offered ten shillings a week more than Warwickshire’s terms, an investment which Northamptonshire do not regret!

Milburn’s first year was spent in qualifying, but still with the profitable return of 1,153 runs in 2nd XI cricket. His first-class debut against Cambridge University was scarcely memorable. His only score was an edged four.

In the following season Milburn opened the innings for the 2nd XI and began with 201 not out, out of a total of 256, against Middlesex II in the second match. Consistent scoring was crowned with two successive centuries off Kent II (including a century before lunch) and Somerset II. 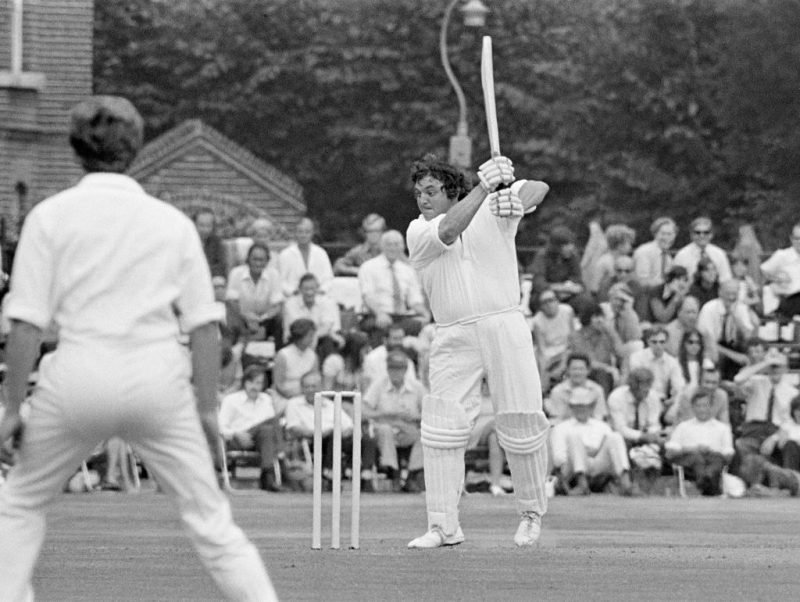 Fittingly his first championship match was at Edgbaston, less fittingly with scores of 28 and 0, and the next, at home, facing Surrey, brought a score of 63 out 125. Yet he went back to the 2nd XI as a final polishing of his raw apprenticeship. He was then vulnerable to off-break bowling.

Mid-way through the following summer he gained a regular place in the championship side. In July there was his maiden first-class century for Northamptonshire off Cambridge University, and later that month he made 102 out of 182 against Derbyshire at Buxton. Milburn still considers this to be his best innings for his county, bearing in mind the quality of Derbyshire’s attack and the state of the pitch. Of Northamptonshire’s total, Mick Norman made 58, and the other individual scores were: 5, 0, 1, 4, 0, 0, 3, 0 not out, and 0 with 9 Extras.

In the winter of 1962/63 Milburn rigorously fought his increasing weight. It had exceeded 18 stones. For five months, three times a week, he endured a strict routine of remedial exercises and circuit training. By the start of the season he was down to 16 stones 5 lb, and the slimmer Milburn took 48 and 123 (seven sixes and fourteen fours) in the second game with Yorkshire.

Later the West Indies conceded 100 and 88 to him, and if he could not stay at 16 stones the value of experience, and particularly of selection in the ball to hit, was beginning to tell.

When he made runs his innings were variously and inevitably described as exhilarating, brilliant or exciting. Gloucestershire were slogged for seven sixes and fifteen fours in 152 not out, and during a short tour of East Africa with MJK Smith’s MCC team, Milburn hit Noel Shuttleworth, a leg-break bowler, for six from each of the first five balls of an over. He was caught on the boundary off the sixth.

In 1966 he began with a fast century at Derby, and followed with an even faster one at Leicester. Winning a place in the first Test, he overcame the cruel blow of being run out without scoring in the first innings to slog 94 in the second. A century followed in his second Test at Lord’s, and Milburn was one of the few personalities the public craved to see.

He scored the quickest century of the season – in eighty-two minutes against Nottinghamshire – and spent the winter in Australia playing for Western Australia, an invitation that was a tribute in itself.

Milburn’s average in an England team not famous for its batting strength was 52.66, second only to Tom Graveney, but he did not share in the final triumph at The Oval. His disappointment could be well tempered by the knowledge that the best of Milburn is still to come. He is also sensible enough to understand that his weight problems will be a handicap unless controlled. His level of performance must be that much better because of his size.

Unhappily his useful medium-pace bowling can no longer be used. Though the hard exercise of Squash and as a Rugby Union forward causes him no discomfort he has only to bowl and his back protests immediately. Nor can the complaint be diagnosed.

Related Story: How Australia’s players performed in the first Sheffield Shield round

Forward short leg is his best fielding position, and any doubt of his mobility is answered by the fact that in 1964 he held 43 catches, a record for Northamptonshire.

Milburn is an even-tempered and modest personality. He is not confused or bothered by theory, which is perhaps the basic reason for his continued success. He has not consciously changed his style or technique since his Burnopfield days.

“I just try and hit the ball” is his over-simplified explanation of his technique. “It is my way of playing the game and I want it to stay that way.” Words to shock and offend many a coach, but it is the essential Milburn, a pearl of great price in modern cricket. Few have been blessed with his genius for attack; fewer still with the nerve to go through with it come triumph or failure.

An unfortunate car accident in May 1969 resulted in Colin Milburn losing use of his left eye, thus bringing an end to his Test career. He did make a brief return to first-class cricket in 1973 and finished his career with 13,262 first-class runs at 33.07 and 23 hundreds.