Bobby Abel was a prolific run-scorer for Surrey in the pioneering years of the County Championship. He died just a few miles from The Oval in 1936.

A great favourite at The Oval, Bobby Abel, popularly known as the Guv’nor, began his career with Surrey in 1881, and played his last match for the county in 1904, failing eyesight causing him to drop out of the XI earlier than otherwise he need have done. Born on November 30, 1857, he was 23 when first appearing for his county. Found in club cricket in Southwark Park, he took some time to accustom himself to new surroundings and his early efforts in first-class cricket gave no idea of the skill which he steadily attained. Very keen, he overcame the handicap of being short and, while maturing his form with the bat, he attracted attention by smart fielding, especially at slip.

In his third season with Surrey he advanced rapidly as a batsman and in 1886 against the Australians at The Oval he played a remarkable innings of 144. In 1888 – one of the wettest summers ever experienced – he came out first among the professional batsmen of the year, scoring in first-class matches 1,323 runs with an average of 31.

Thenceforward his successful career was interrupted only in 1893 when a serious infection of the eyes interfered with his play. If late in reaching his best, he was right at the top of the tree from 1895 to 1902, scoring over 2,000 runs in first-class matches in eight successive seasons. His highest aggregate of runs, 3,309, was obtained in 1901 and his average in these eight years of conspicuous ability ranged from 56 to 41. In 1903 his eyes troubled him again, and though playing in glasses helped him to some extent next year his first-class career then closed. 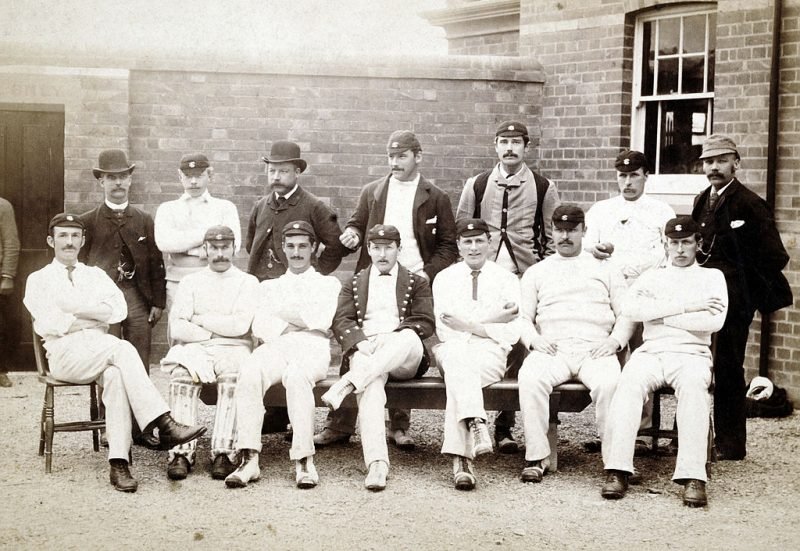 The Surrey team in 1886, with Bobby Abel standing second from left

His highest innings was 357 not out against Somerset at The Oval in May, 1899; it remains a Surrey record and is second best for any county, AC MacLaren’s 424, also off Somerset bowlers, at Taunton in 1895, still being unapproached. Besides this great score, Abel played eight innings of more than 200, and nine times in first-class matches he carried his bat through an innings. Among Surrey batsmen he ranks with Hobbs, Hayward, WW Read and Harry Jupp.

#OnThisDay in 1857, Bobby Abel was born. In 1892 he became the first Englishman to carry his bat through a Test innings, but he is best remembered for his efforts for Surrey. He scored over 27,000 runs for the club and his 357 in 1899 remains their highest-ever score. pic.twitter.com/sELDIf3p1A

In the winter of 1887-88 when, owing to what may have been a misunderstanding between Sydney and Melbourne, but at the time was generally regarded as rivalry between the cricket authorities, two English teams visited Australia. Abel went with GF Vernon’s side and scored 320 runs in 11-a-side matches, average 24. He was not chosen when the two bands joined forces on the occasion when Peel and Lohmann disposed of Australia for totals of 42 and 82.

Abel went to Australia again in 1891-92 when WG Grace captained Lord Sheffield’s side, and he averaged 38 for the 11-a-side games. At Sydney, in the second of the three Test matches, he accomplished the remarkable performance of carrying his bat through the first innings for 132 but Australia won the contest in which Alex Bannerman, who batted seven hours and a half for 91, received 204 balls from Attewell and scored off only five. Abel visited South Africa with Major Wharton’s team in 1888/89 and scored 1,075, average 48 – more than twice aggregate and average of any other member of the side.

A batsman of great resource and patience, he rarely if ever carried caution to an extreme and for a man of his small stature he was quite a punishing player. Once at The Oval he performed the rare feat of scoring a hundred runs between 12 o’clock and lunch-time. He and Brockwell enjoyed many big partnerships together for the Surrey first wicket, and against Hampshire at The Oval in August 1897, scored 379 – a record for an opening stand at that time – 265 against Warwickshire at The Oval in September, 1898, 231 against Sussex at The Oval in May, 1897 and 270 (unbroken) against Kent at The Oval in 1900. 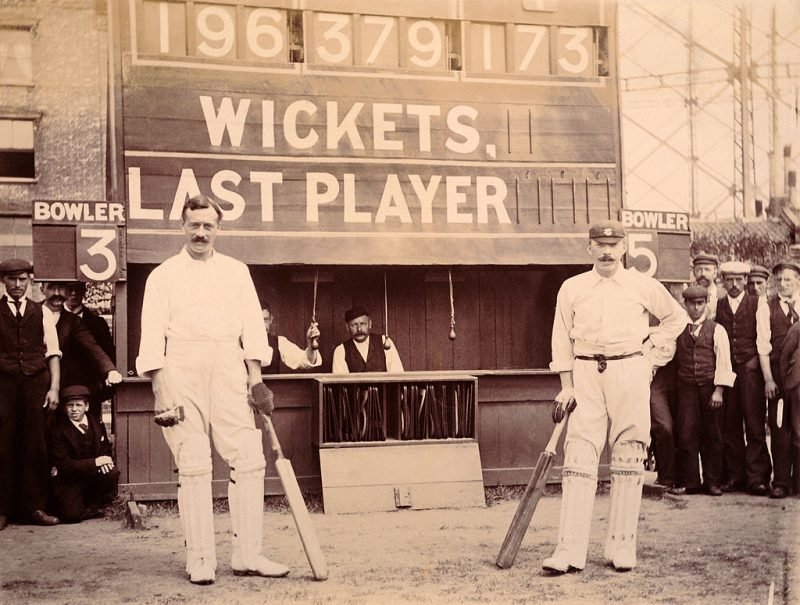 Other great first-wicket stands in which he shared were 364 with DLA Jephson against Derbyshire at The Oval in 1900, 246 with Tom Hayward against Sussex at Hastings in 1902, and 226 with WG Grace for South against North at Scarborough in 1889. The biggest partnership of all in which he participated was one of 448 with Hayward for Surrey’s fourth wicket against Yorkshire at The Oval in 1899, Abel scoring 193 and Hayward 273. This is the world’s record for the fourth wicket.

Abel drove hard and cut well, but his special strength came in ability to get runs on the on-side. Very few batsmen have excelled him in scoring in front of short leg with brilliant and safe forcing strokes off his legs. Like many little men, he did not keep his bat perfectly straight, but accurate judgement of length of bowling and quickness on his feet compensated for this defect.

A very sure field, notably at slip, Abel also bowled slow off breaks skilfully but was not often wanted in the very powerful Surrey attack. Quiet and unassuming in manner, Abel was never spoiled by success. After one of his great days at The Oval, hundreds of his admirers would gather in front of the pavilion and chant “Bob, Bob, Bob”, again and again until the Guv’nor bowed his acknowledgements.