Bob Wyatt flourished as an international cricketer in 1929 and was named as one of Wisden’s Five Cricketers of the Year the following year.

Robert Elliott Storey Wyatt – like F.R. Foster one of the best amateur all-round cricketers who ever played for Warwickshire – was born on May 2, 1901, at Milford, in Surrey. As a boy he learned his cricket at Milbourn Lodge School, Esher, and, on the family moving to Warwickshire in 1911, he went to King Henry VIII School at Coventry.

In his young days, he received some valuable coaching from his father and developed his game while playing with Coventry and North Warwick clubs. The attention of the Warwickshire Committee being drawn to his doings, he was invited to play for that county first in 1923, but, with 68 as his highest score, averaged only 16 in 43 innings while his 35 wickets cost over 31 runs apiece.

Not until 1926 did he make any pronounced advance but in that year he scored over a thousand runs with an average of 35 and obtained 86 wickets for 28 runs each. At the end of that season he was selected to go to India with the MCC team captained by A.E.R. Gilligan who, on his return, spoke in terms of great praise of Wyatt’s batting, predicting that he would play for England.

He did not do much as a bowler, taking only 33 wickets, but he made five scores of over a hundred, obtained 1,813 runs with an average of 53 and came out second only to Sandham. During that tour, he accomplished the remarkable feat at Colombo of scoring 124 and doing the hat-trick on the same day.

Still further improvement came in 1927 when he was second in the Warwickshire averages with 51, but his bowling fell away somewhat. The following winter he went to South Africa with the MCC team, made two scores of over a hundred and, with an aggregate of 794 runs in all matches, averaged 56. He played in all five Test matches, his best score being 91 in the second. 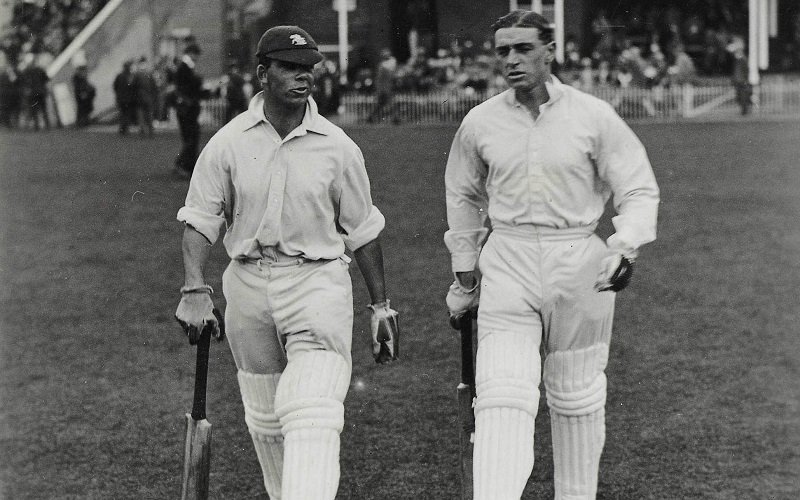 Bob Wyatt walks out to bat with Wally Hammond at the Scarborough Cricket Festival, circa 1930

In the summer of 1928 he was at the top of his form for Warwickshire, scoring over 2,000 runs — the first man ever to accomplish this for the county — playing six three-innings and, with an average of 63, heading the batting table. Although he did not make so many runs last season, he was actually a better cricketer. He exceeded the hundred on seven occasions for his county and was again at the top of the batting averages.

His great triumph came in the fourth Test match at Manchester – his first appearance in a representative engagement in this country – whem, with Woolley, he took part in a third wicket stand of 245 runs and himself scored 113. He thus enjoyed the distinction of being the first amateur since the war to make a hundred in a Test match.

Bob Wyatt, a legend for @WarwickshireCCC and a former @englandcricket captain, died on this day in 1995. Here is his @WisdenAlmanack obituary – https://t.co/qKDhLgpx9s #wisdenobits

At the end of the season he accepted the invitation of the MCC to make one of the team to visit the West Indies. From 1926 onwards he has played every season in the Gentlemen and Players match at Lord’s, in addition to being frequently chosen for the match at the Oval.

If he has never quite realised expectations as a medium-paced right hand bowler, Wyatt, with his ability to swing the ball and, at times, make it turn, has always been a useful change, likely with the new ball to break up a partnership or get a wicket or two.

Of his batting no two opinions can be held as to its soundness. Very watchful, he possesses excellent defensive strokes and can hit hard on either side of the wicket. He rarely fails to punish anything in the nature of a loose ball, and is especially good in the placing of his strokes.

One might with justice say that he was rather unlucky not to go to Australia with the last team, his style of batting, reliable and workmanlike, being eminently suitable for the conditions in that country. Moreover, he is an untiring and efficient outfielder.

Modest in regard to his own doings and of rather a retiring disposition, Wyatt, as he has often shown, is essentially the cricketer for a big occasion.