Bob Appleyard overcame huge obstacles to become one of the game’s most formidable bowlers in the 1950s. His Wisden Almanack obituary in 2016 told an amazing story.

Even on its own, Bob Appleyard’s cricket career was remarkable. Throw in his backstory, and it becomes one of the most extraordinary in the history of the game. Appleyard was approaching his 27th birthday when, in 1951, he became an established member of the Yorkshire team – and took 200 wickets at 14, the most productive first full season of any bowler. He seemed on course for greatness, but little in his life ran according to plan.

Early the following summer, he was struck down by tuberculosis and had part of a lung removed. It should have meant the end of his professional career, but he returned two years later after a gruelling rehabilitation to make his Test debut and play a significant role in England’s 1954-55 Ashes triumph.

In all, his career amounted to little more than six seasons, but he retired with 708 wickets at 15.48; since the First World War only Hedley Verity has boasted a lower average. Bill Bowes, Verity’s Yorkshire and England team-mate, believed Appleyard deserved to be mentioned in the same breath as Sydney Barnes and Bill O’Reilly, two others who defied easy categorisation. 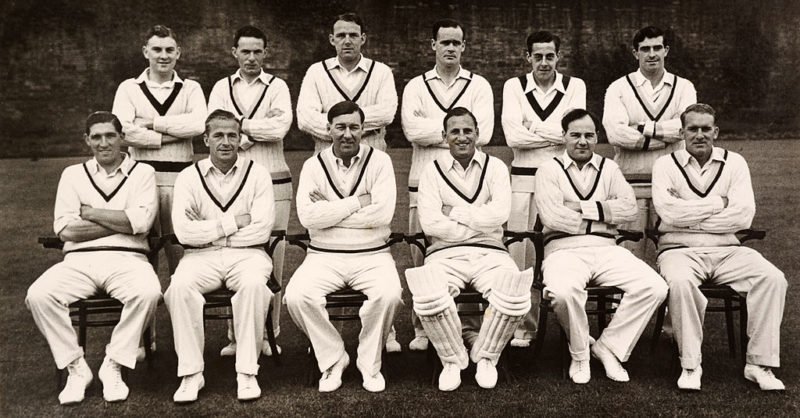 Appleyard (back row, third from left) played his whole career for Yorkshire

Serious illness was only one of the setbacks Appleyard endured. His mother Maud left home when he was seven, and his sister Margaret died of diphtheria when he was 13; his father John remarried and started a new family but, horrified by the declaration of war in 1939, gassed himself, his wife and their two young daughters, having first sent his son off to his grandmother. Appleyard discovered the bodies on returning home. Later, he had to bear the deaths of his own son, Ian, and grandson, John – both from leukaemia.

He had a successful career outside the game, and was a senior executive for the British Printing Corporation when it was taken over. The new owner, the publishing tycoon Robert Maxwell, dismissed him on fabricated grounds. But Appleyard refused to buckle and fought a long and successful battle for compensation. He was an indefatigable fundraiser for the Yorkshire Academy at Bradford, work which earned him an MBE. Appleyard internalised much of his trauma until he was persuaded to tell his story to Stephen Chalke and Derek Hodgson in 2003. No Coward Soul – a phrase from Emily Bronte’s last poem before her death from TB – was Wisden’s second Book of the Year.

Appleyard’s bowling displayed unusual versatility. He could open the attack with Fred Trueman, deploying conventional seam and swing. When the shine disappeared, or if the pitch was helpful, he would bowl off-spin, still at a lively pace. “He was a very, very fine bowler,” said Yorkshire team-mate Ray Illingworth. “He was a tall bloke and in his pomp he had a very high arm, which meant he got a lot of bounce.” Appleyard changed styles without altering his 16-pace run-up or his action, which he believed was a key element in deceiving batsmen. “Sometimes he was like Alec Bedser, sometimes like Jim Laker,” said Johnny Wardle.

Even on its own, Bob Appleyard’s cricket career was remarkable. Throw in his backstory, and it becomes one of the most extraordinary in the history of the game

He also drew eagerly on the accumulated wisdom of several greats. As a boy at the Headingley nets, he was tutored in the rudiments of swing by George Hirst. Later, he was coached by Emmott Robinson: “Tha’ knows tha’ has to bowl five good balls an over. And the sixth hasn’t to be a bad ‘un.” Early in his Yorkshire career, he spent precious minutes in conversation with Barnes during a game against Staffordshire; at Scarborough, he would seek out Wilfred Rhodes. Appleyard experimented regularly with new grips, always carrying a ball in his coat pocket, and studied yoga, believing it helped him reach a peak of concentration as he approached the wicket.

Appleyard’s Bradford school was a ten-minute dash from Park Avenue and, by the age of seven, he knew his calling. His first invitation to Yorkshire nets came in 1938, but the war intervened, and he joined the Navy. Back home he resumed cricket as a professional with Bowling Old Lane, but had to wait until 1950 before Yorkshire took an interest. It was only after he began to dabble in spin that he was recognised as first-team material.

He travelled to Edinburgh to take on Scotland, claiming match figures of five for 41 in 26 overs, then played Surrey at The Oval, which he regarded as his real debut. He had been allocated a room with the combustible Alec Coxon who, as Appleyard slept fitfully, burst in at 1am and began trying to fix a cigarette lighter for a woman he had met that evening. Next morning, the roommates shared the new ball, and Appleyard took four for 47. The Times praised his “high and virile action”.

“You will play again, Mr Appleyard. In fact I shall come to Headingley to watch you bowl"

His triumphal progress through the summer of 1951 began with four for 26 in the Parks, and six for 38 (five of them bowled) against the South Africans at Bradford. With Coxon sacked and Brian Close on national service, Yorkshire were in need of two bowlers; instead they discovered that one man could replace both.

Nevertheless, much of his success could be attributed to a happy accident during the winter. Norman Yardley, the Yorkshire captain, was keen for him to develop his off-breaks, but he soon developed a blister on his spinning finger. Unwilling to stop bowling, Appleyard tried spinning the ball off his middle finger. “I found I could bowl it much quicker than the normal off-break,” he recalled. The Yorkshire coach Arthur Mitchell was summoned to his net: “If you can bowl like that you can bowl any bugger out.”

Laid low by TB, he missed a couple of matches in July but, fighting fatigue, had reached 189 wickets by the start of the season’s final game, against MCC at Scarborough. He took eight in the first innings, but in the second bowled unchanged for hour after hour, once pleading with Yardley to take him off when he felt that pursuit of the 200th wicket was “spoiling the game”. Finally, Roy Tattersall hit the penultimate ball of his 46th over into the hands of Trueman at mid-on. Appleyard had got through 1,323.2 overs that summer, and was named a Wisden Cricketer of the Year. 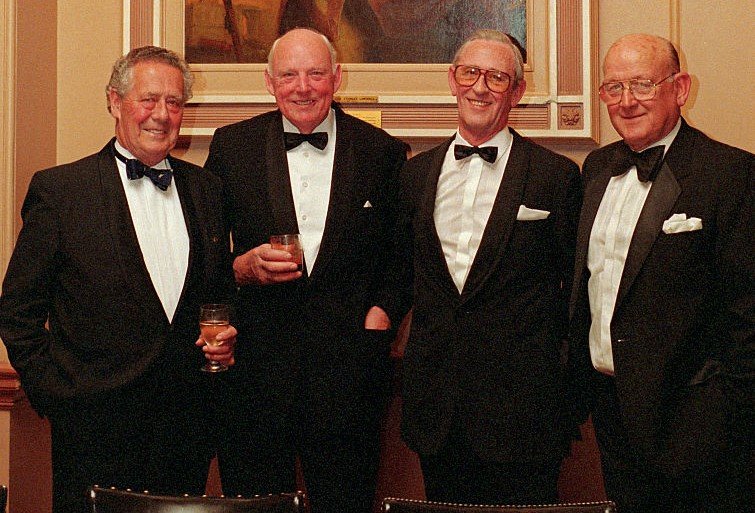 Appleyard (second from left) at the 1995 Wisden dinner

He spent the winter months trying to improve his stamina, yet could not shake off his exhaustion. Suffering from a cough and a soaring temperature, he was sent home from Yorkshire’s first Championship match in 1952, against Somerset. Four days later he was in hospital, beginning a five-month period of preparation for surgery to remove the top of his left lung. He was fortunate to be in the hands of the eminent surgeon Geoffrey Wooler, who assured him: “You will play again, Mr Appleyard. In fact I shall come to Headingley to watch you bowl.”

His wife smuggled a cricket ball into the hospital, and he worked on it for hours under the bedcover, determined to maintain strength in his hands. The operation was successful but the recovery arduous: his muscles wasted by months in bed, Appleyard first had to learn to walk. By the winter of 1953-54, he was well enough to bowl again, and Yorkshire sent him to a Swiss resort for a month before the start of the season.

Appleyard always rated his achievements in 1954 – when he took 143 wickets at 14 while bowling more than 1,000 overs – more highly than his record-breaking summer three years earlier. His return seemed complete when he was called up for the second Test against Pakistan at Trent Bridge: he dismissed Hanif Mohammad with his second ball, and ended his first day in Test cricket with five for 51. It was enough to earn him selection ahead of Laker in Len Hutton’s star-studded squad for the Ashes.

He found Australian pitches unresponsive but – ever thoughtful – used flight and variations in pace. He was chosen for the second Test at Sydney, and ended the series with 11 wickets at 20, all of them frontline batsmen, before playing in the two Tests that followed in New Zealand. But Appleyard won only two more caps in the next two summers and, despite passing 100 wickets in 1956, found his effectiveness reduced by injuries, especially a trapped nerve in the shoulder that meant he played just one match in the 1955 series against South Africa. He was never quite as formidable as he had been before his illness. In 1958, he announced his retirement.

Appleyard could be a difficult man. “He had strong views and he did not mind making enemies,” said Chalke. Illingworth added: “I’m not saying he was my best friend, because he wasn’t; he was an awkward bugger.” But it was his cussedness that gave him the resolve to take on Maxwell. “I know that Appleyard,” he said. “He’s a bloody-minded Yorkshireman. He’ll take me all the way.” Maxwell settled just before the case reached the High Court.

Of Appleyard’s greatness as a bowler there was no question. “We’ll never see the like again,” said Trueman. Illingworth rated him higher than Laker: “He had a bigger heart than Jim. Bob always wanted to bowl, whatever the pitch was like.”

This obituary first appeared in the Wisden Cricketers’ Almanack 2016.