Bill Voce formed half of one of England’s greatest pace duos. His Wisden obituary in 1985 recalled a long and distinguished career.

Bill Voce is largely thought of in these days as the junior in one of the great bowling partnerships, Larwood and Voce, and for the contribution that he made to the “bodyline” attack in Australia in 1932/33. Although he was somewhat slower than Larwood, his line, from left-arm over the wicket, and the steeper bounce that he obtained from his height, made him formidable enough and the batsmen got no relief when facing him.

His job in that 1932/33 series was to maintain the pressure and he did it nobly, taking, besides, 15 wickets in four matches: he missed the fourth Test owing to injury. The controversy which this tour excited and the amount that has been written since has diverted attention from his performances in the first two Tests in 1936/37.

No English side in this century had had such a bad press before the tour started: it was popularly regarded as having no chance whatever. Its captain, G.O. Allen, the third fast bowler on the previous trip, had been irredeemably opposed to bodyline and had refused to bowl it: it is worth recording that he himself had by orthodox methods taken eight for 131 in the third Test.

So before the selection of the team was completed the chairman arranged a meeting between Allen and Voce at which Allen insisted on an undertaking being given that bodyline tactics would not be employed. Voce demurred at first, but finally agreed to fall in with his captain’s wishes and throughout the tour bowled over the wicket to an off-side field. In the first Test he took six for 41 and four for 16: Australia lost by 322 runs and the critics were confounded.

The second was even more sensational. Allen declared (a step almost unprecedented in a timeless Test) at 426 for six in order to get Australia in on a wet wicket, and with the seventh ball of the first over Voce had O’Brien, a left-hander, caught at slip: from the next ball Bradman was caught at short-leg. A maiden followed and off the second ball of his next over McCabe was caught. Australia were three wickets down for 1 run and Voce had taken them all in four balls. The side was out for 80 and, though they got 324 in their second innings, they lost by an innings, Voce’s figures being four for 10 and three for 66. In addition Chipperfield had been missed off his bowling in the first innings.

In this match the weather had helped England, in the next it helped Australia, who won by 365 runs. Voce was in no way to blame: though his six wickets cost him 169 runs, he maintained, according to Wisden, “his concentration and deadliness right throughout both innings”.

Unfortunately, at this stage of the tour Voce’s back gave out. Allen was strongly opposed to playing him in the fourth Test. He reckoned that no fast bowler can give of his best unless he is completely sound, and he hoped by resting Voce to have him fit to win the fifth Test. However, he was overruled by his selection committee. England again lost: Voce took one wicket only which cost him 135 runs.

Nor was he up to form in the last Test when Australia, scoring 604, won by an innings. He took three for 123, giving him a record for the series of 26 wickets at 21.53. During this tour a close and life-long friendship had arisen between Voce and his captain. Years later he told Allen that he now reckoned that bodyline had been wrong, but that, from loyalty to his old friend Larwood, he was not prepared to say anything on the subject to the press. This sidelight on his character helps to explain why he was so widely respected when, after his playing days were over, he coached first at Trent Bridge and later for many years for MCC at Lord’s and elsewhere. 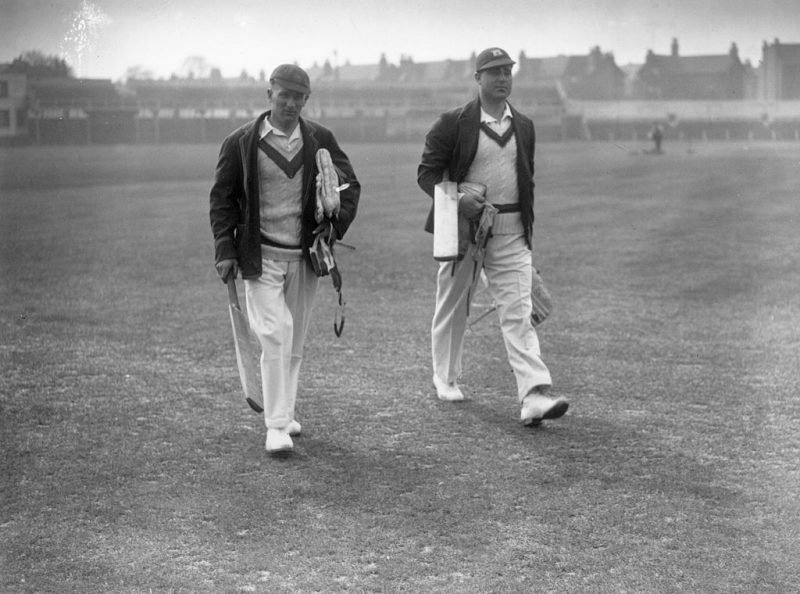 After starting work in a colliery when 14, Voce was noticed in local cricket by Fred Barratt, the Nottinghamshire fast bowler, and engaged on the county staff in 1926. Success in the Second XI brought him a trial for Nottinghamshire in June 1927, against Gloucestershire at Trent Bridge. He seized it by taking five for 36 and followed this a few weeks later with six for 39 against Essex.

Strong though the county’s bowling was, he kept his place for the rest of the season and finished with 37 wickets at 27.18. At this time he was an orthodox slow left-armer, though in the later matches he sometimes lowered his arm slightly and bowled swingers. In 1928 he definitely settled to bowl fast-medium and many felt that England had lost a great slow left-armer. That may well be true, but it is certain that they had gained a great fast one.

After heading the Nottinghamshire averages in 1929 and having a big part in winning them the Championship, he went that winter with MCC to the West Indies and played with considerable success in what were then called Representative matches and have since been canonised as Tests. There was, in fact, simultaneously an MCC side playing Tests in New Zealand and the two teams between them contained only five men who played in the Tests against Australia in 1930. On this tour Voce bowled mainly fast, but his chief success was in Trinidad where, moderating his pace to medium on the matting, he took 12 for 110 against the island and 11 for 119 in the Test.

In the Tests in South Africa in the next winter, he took 23 wickets, more than any other bowler on either side, and, after representing England at home against New Zealand in 1931 and India in 1932, he was picked for Jardine’s Australian tour. Despite their success there, neither he nor Larwood was selected to play against Australia in England in 1934 and, as Jardine himself had refused to be considered, there was much the same indignation in many quarters as in 1984: it was felt that owing to diplomatic considerations England were fielding something considerably less than their best team. Criticism increased when at Trent Bridge in August Voce took eight for 66 against the tourists and was accused of bouncing the ball at them unnecessarily.

Before the 1935 season started both he and Larwood asked MCC not to pick them for any of the Tests. However, midway through 1936 Voce again made himself available if wanted, and, picked for the third Test against India, bowled well without any luck at all: it was this performance that made him a certainty for the side to Australia that winter. With that tour, through no fault of his own, his best days ended.

In 1937, after playing in the first Test against New Zealand, he damaged a knee and had to have a cartilage removed, which finished his cricket for the season. In 1938 he was much troubled by synovitis and his wickets were expensive, and he thus shares with J.N. Crawford and D.R. Jardine the distinction of being a great England cricketer who never appeared against Australia in a Test in England.

In 1939 he was given a benefit, and modern readers may be surprised to hear that this produced only £980. In 1946 he was 37 and it could hardly be expected that, after six seasons away from serious cricket, he would be the bowler he had been, especially as he was still in the forces and not regularly available. None the less, four for seven in a Test trial won him a place in the second Test against India and also in the side for Australia in the autumn.

The selection was a mistake: the beautiful action remained, the venom had gone, and he now bowled in those whom once he would have bowled out. Moreover, his knee still troubled him, and in June 1947 he resigned from the county side. However, appointed their coach, he continued to play occasionally in a crisis till 1952.

In his earlier days as a fast bowler he bowled round the wicket. On his first tour of Australia he used to bowl round for five or six overs while the shine lasted and then switch to bodyline, bowled over the wicket. To left-handers he used a normal field, but bowled a generous allowance of bouncers. On Allen’s tour he bowled almost entirely over the wicket. In England after his Australian tours he bowled over or round according to circumstances. But his cricket by no means ended with his bowling.