Bill Edrich always reserved his best for the most challenging of situations and was a force to reckon with in red-ball cricket. His Wisden Almanack obituary profiled an illustrious career.

Bill Edrich was a cricketer who would have been the answer to prayer in the troubled England sides of today and especially in the West Indies in 1985/86. Endlessly cheerful, always optimistic and physically courageous, he was a splendid hitter of short-pitched fast bowling and took the blows he received as a part of the game. When he made 16 in an hour and three-quarters on a hideous wicket at Brisbane in the first innings of the first Test in 1946/47, an innings which Wisden’s correspondent described as “one of the most skillful batting displays I have ever seen”, it was reckoned that he was hit ten times by Lindwall, Miller and Toshack.

So far from being demoralised by this experience, he scored in the series 462 runs with an average of 46.20, and that for a side which lost three Tests, two of them by an innings, and drew the other two. Moreover, his cricket did not end with his batting. Though he stood only 5ft 6in tall, and had a low, slinging action, he could off a run of 11 strides bowl genuinely fast for a few overs.

Admittedly it was a terrible proof of the weakness of English bowling after the war that at this period he often had to open in Test matches. It is barely credible that in 1950, when his 22 wickets in the season cost him just under 50 runs each, he opened in both of West Indies’ innings at Lord’s. In fairness it must be added that Walcott, who made 168 not out in the second innings, was missed off him in the slips at nine.

Still, in a reasonably strong side he was a valuable change as a fifth or sixth bowler, always apt to upset a good batsman by his unexpected speed. Like many natural athletes, he originally made a reputation as a tireless outfield, but he was soon found to be too valuable in the slips to spend much time elsewhere. One way and another he was always in the game, always trying his hardest.

He came of a Norfolk farming family, which sometimes produced its own XI. Three of his brothers played with some success in first-class cricket and his cousin, John, had later a distinguished Test match career. Bill Edrich first appeared for Norfolk in 1932 at the age of 16, and by 1936 had scored 1,886 runs for them in the Minor Counties Championship alone, not to mention an innings of 111 against the 1935 South African side. By then he had begun to qualify for Middlesex, and in 1936 he made three hundreds in first-class cricket for MCC and came second in the first-class averages with an average of 55. 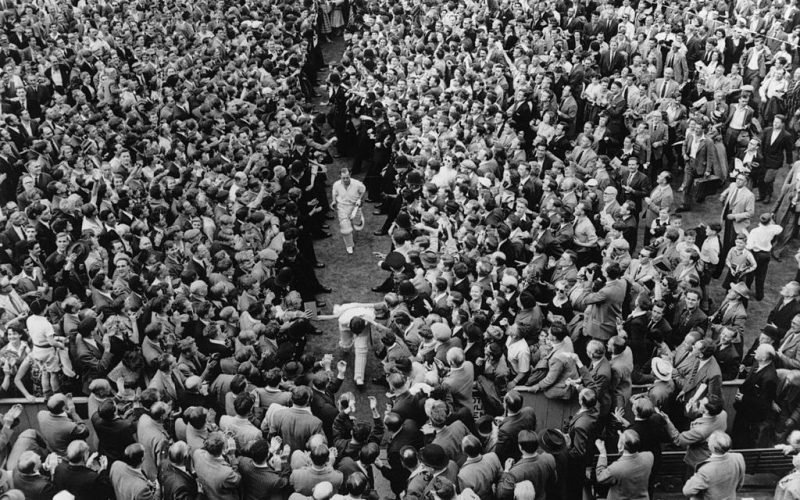 So it was no surprise when next year, in his first full season of first-class cricket, he scored 2,154 runs with an average of 44.87, heading the batting, and was picked for Lord Tennyson’s side in India. In 1938 he started by making 1,000 runs before the end of May, a target he achieved only with the help of an unexpectedly generous action by Bradman who, captaining the Australians against Middlesex on May 31, made an otherwise meaningless declaration to give him a chance of getting the last 20 runs. After this feat his place in the England side was secure; so secure that he kept it right through the series even though failure followed failure and six innings produced only 67 runs.

In the following winter, as a member of the side to South Africa, his ill luck pursued him, five innings bringing 21 runs. At last, in the second innings of the timeless fifth Test, when England were set 696 to win, he saved the side by batting seven hours, 40 minutes for 219. Timeless or not, the match was abandoned when the score stood at 654 for five: the rain came down, everyone had enough, and the Englishmen left to catch their boat.

Edrich had always relied rather on his natural gifts, his wonderful eye, his physical strength and courage than on a studiously sound technique.

The sequel to this innings is perhaps the strangest part of the story. There can surely be no parallel for a batsman failing in eight consecutive Tests and yet keeping his place, but one would at any rate expect that, when he had at last justified the selectors’ confidence, he would have retained it. Instead, in 1939, though his average for the season was 49.68, he did not play in a Test against the West Indians, and in 1946, when Test cricket was resumed after seven years’ interval, he had only one match against India and did not bat in that. Moreover, he was only a late choice for the 1946/47 tour of Australia. Let anyone justify these inconsistencies who can.

During the war Edrich had joined the RAF and had a distinguished career, winning the DFC as a bomber pilot. Up to the war he had played as a professional; after it he became an amateur. Furthermore, until 1938 he had normally opened the innings. When he played his great innings in South Africa, he had been moved down the order, and in 1939 Brown and Robertson established themselves in the Middlesex side as a great opening pair. 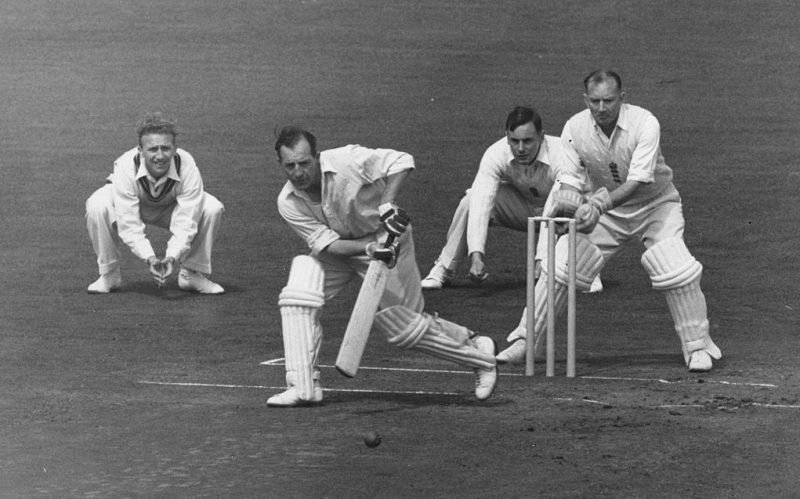 Bill Edrich in action for Middlesex in 1956

Thenceforward Edrich’s normal place was first wicket. It was in Australia in 1946/47 that he showed himself indisputably a Test player. His batting in the first Test has been mentioned. In the second he scored 71 and 119 and made a gallant attempt to stave off an innings defeat. He followed this with 89 in the third Test and 60 in the fifth. 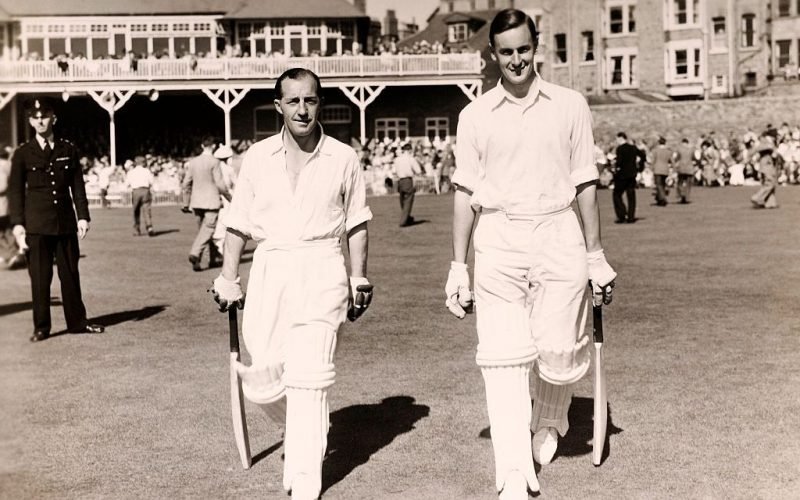 Bill Edrich (left) and Peter May walk out to bat during the Scarborough Cricket Festival, circa 1950

In 1948, in the disastrous series against Australia, his sole notable contribution was 111 in the fourth Test at Leeds, but next year against New Zealand he averaged 54 with only one century. In 1950 he contributed a typically gallant 71 in the second innings of the first Test at Manchester, but at Lord’s in the second he failed abjectly in each innings. His scores were eight and eight it would have been better for his reputation if he had taken two first balls. Each time he stayed long enough to make it clear that he was completely out of his depth with Ramadhin and Valentine. Nothing worse for the morale of the younger members of the side can be imagined.

Inevitably, he was dropped for the two remaining Tests, but for Middlesex he scored much as usual and it was a great surprise when he was omitted from the team for Australia at the end of the season. The Australians themselves were astonished, and when the side proved to be incontestably the worst batting one England had ever sent out, and all the new choices were failures, there were those who thought that his courage and experience might have turned the scale in a series which was closer than the results indicated. 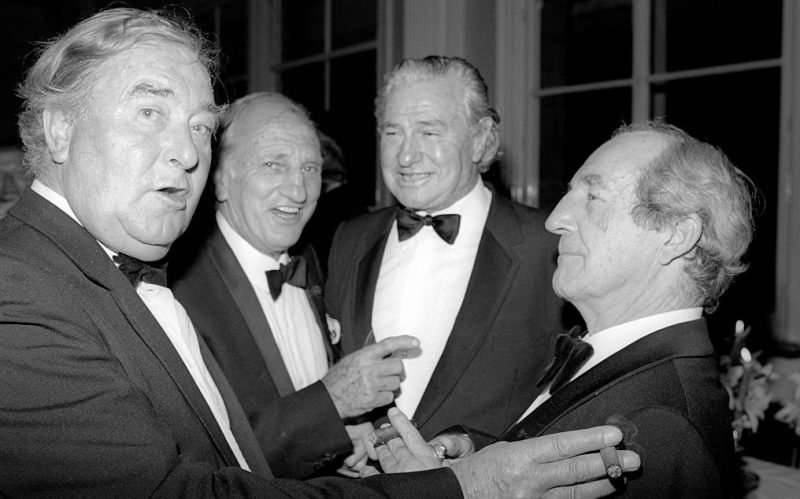 No reasons were given at the time for his omission, but in fact an ill-advised late-night party during the first Test against West Indies, followed by his calamitous showing in the second, had convinced the selectors, and not least the captain elect, that the team would be better without him. By a generous gesture Edrich himself was at the station to see the team off and to wish them well.

Although few could have foreseen it at the time, this was the beginning of the end for Edrich. Never again was he to be the force in Tests that he had been. Recalled as Hutton’s opening partner for the last three Tests against Australia in 1953, he made 64 at Leeds and was 55 not out when the Ashes were regained at The Oval after a period of 18 years. But he did not do much in his one Test against Pakistan in 1954, and although at the end of that summer he was picked for Australia, only a fighting 88 in the second innings of the first Test showed what he could once do. That was the end of his career for England.

For Middlesex he still made runs, if not on the scale of his great years. In 1951 and 1952 he shared the captaincy with Compton: this, like most such diarchies, was not a success. From 1953, he was sole captain, a position in which he certainly could not be blamed for lack of enterprise. At last in 1957, though he got his 1,000 runs, for the 15th time his average dropped to 22.92 and he felt it was time to resign. Next year he played in about half the matches with only moderate results, and at the end of the season he accepted the captaincy of Norfolk, for whom he continued to score runs and to take wickets with slow off-breaks until 1972.

When his first-class career ended he was 42, an age at which many great batsmen have still been batting with almost undiminished powers. However, Edrich had always relied rather on his natural gifts, his wonderful eye, his physical strength and courage than on a studiously sound technique. Granted that he was always well behind the ball when playing a fast bowler, he had a markedly right-handed grip and his best strokes were the cut, the hook and the pulled drive. His bat did not have that pendulum-like swing up and down the line which is the foundation of real soundness. Still, he had done enough for the fame and had given much pleasure to many thousands of spectators.