No less an authority than W.G. Grace rated Arthur Shrewsbury as the best batsman of his era. His talent was celebrated in his Wisden obituary in 1904.

As everyone interested in cricket is aware, Arthur Shrewsbury shot himself on the evening of May 19. Illness, which he could not be induced to believe curable, together with the knowledge that his career in the cricket field was over, had quite unhinged his mind, and those who knew him best – Alfred Shaw among the number – had, for some little time before the tragic end came, been apprehensive of suicide.

It may fairly be claimed for Shrewsbury that he was the greatest professional batsman of his day. He had strong rivals in William Gunn, Abel, George Ulyett, Barnes, and, more recently, Hayward, but, looking at his career as a whole, he would, by the majority of critics, be given the first place.

There was never any doubt about his class, for even when in 1873, as a lad of 17, he came up to Lord’s to play for the Colts of England against the MCC, it was confidently stated at Nottingham that he was sure to develop into a crack batsman. Like other young Notts players of those days, he had, to a certain extent, modelled his style on that of the late Richard Daft, and to this fact can be attributed the ease and finish of his method. He played from the first like one who had little left to learn, and only needed experience.

He was given a place in the Notts XI in 1875, and in a season of wet weather and small scores, he came out fourth in the county’s batting, averaging 17, with an aggregate of 313 runs. His highest innings was only 41, but he played in such fine form as to justify all that had been said in his favour. The following year, he made his first great success, scoring 118 against Yorkshire, at Trent Bridge, and in May 1877, he made 119 at The Oval, for the Players of the North against Gentlemen of the South, this being his first big innings on a London ground. Thenceforward, he was recognised as one of the leading professional batsmen in England.

The turning point in Shrewsbury’s career was his first visit to Australia in the winter of 1881/82. He went out in bad health, but came home, physically speaking, a new man, the sea voyages and the warm climate having done wonders for him. In 1882, in the August Bank Holiday match at The Oval, he played an innings of 207 against Surrey – the first of his many scores of over 200 in big matches – and from that time, he met with ever increasing success, his highest point being reached in 1887, when in first-class cricket, he scored 1,653 runs, with the wonderful average of 78. 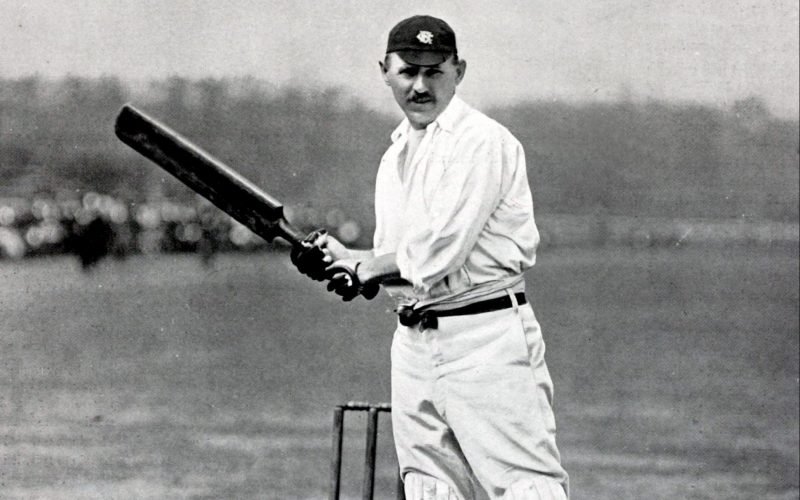 Shrewsbury’s long career saw him top the batting averages six times, his best summer being 1887, when he scored 1,653 runs

Eight times that season, he obtained over a hundred, his highest score being 267 at Trent Bridge against Middlesex. He was absent from English cricket in 1888, being engaged in managing a football team in Australia, but he was back again in the Notts XI in 1889, and played on without interruption until the end of the season of 1893. In 1894, partly by reason of indifferent health, he was not seen in first-class matches, but he reappeared for Notts in 1895, and, as everybody knows, went on playing regularly until the close of the season of 1902. In that year, his form for a man of 46 years of age was astonishingly good, and for the first time in his life – against Gloucestershire, at Nottingham – he made two separate hundreds in one match.

Among his many great innings, he always thought himself that absolutely the best was his 164 for England against Australia at Lord’s in 1886. The wicket on the first day varied in pace, owing to rain, in a most puzzling way, and one famous member of the Australian XI said frankly that he should not have thought it possible under the conditions that prevailed for any batsman to obtain such a mastery over the bowling. 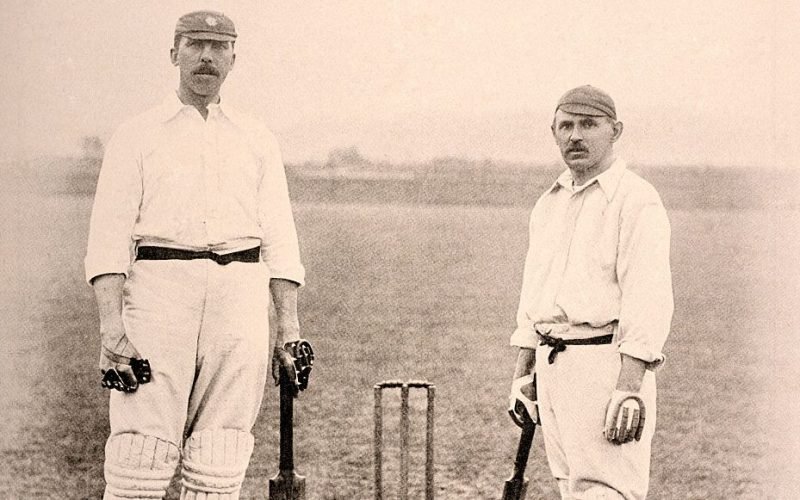 Arthur Shrewsbury with England and Nottinghamshire teammate George Gunn, circa 1890

The innings, however, great as it was, could scarcely have been finer than his 106 – also at Lord’s – for England against Australia in 1893, when he and F.S. Jackson triumphed over Charles Turner’s bowling on a wicket rendered extremely difficult by rain and sun.

In Gentlemen and Players matches, Shrewsbury was conspicuously successful, scoring over a hundred twice at Lord’s and twice at The Oval. As a batsman, he had a style of back play peculiarly his own, and his judgment of the length of bowling was almost unequalled. It was said of him that he seemed to see the ball closed up to the bat than any other player.

More than that, there was such an easy grace of style and such a suggestion of mastery in everything he did that, whether he scored slowly or fast, his batting, to the true judge of cricket, was always a delight. Excepting of course WG Grace, it may be questioned if we have ever produced a more remarkable batsman.

On sticky wickets he was, by universal consent, without an equal in his best seasons, his defence being so strong and his patience so inexhaustible. Personally, Shrewsbury was a man of quiet, retiring disposition, and while very proud of the place he had won in the cricket field, always modest when speaking of his own doings.