Arthur Milton, a brilliant all-round sportsman, scored a century on his Test debut in 1958. He was named a Wisden Cricketer of the Year the following spring.

A natural player of games finds that the art of hitting, bowling, catching and kicking a ball comes easily to him. Clement Arthur Milton, the Gloucestershire and England cricketer, and former England soccer winger, who made his first trip to Australia with MCC during the winter, is such an athlete.

Born at Bristol on March 10, 1928, Arthur Milton found early that he had this gift of enjoying and excelling at games. His father, William Milton, a keen club cricketer, instilled a love for his own game in his son, and at Cotham Grammar School, Milton junior, under the enthusiastic guidance of the late Mr Bert Crew, master of English and of cricket, who for a time acted as Gloucestershire scorer, made rapid progress at sports. He captained the cricket, soccer and rugby teams.

Experience with Stapleton, his local cricket club, increased young Milton’s ability as a middle-order batsman, medium-pace bowler and as fielder anywhere he was put. From 18 to 20, he did his National Service with the Army, and whenever on leave, he turned out for his club. The eyes of Gloucestershire were already on him and an invitation to appear in Second XI games was followed in 1948, the summer before his demobilisation, by selection for two first-class matches against Northamptonshire (away) and Combined Services. A score of 58 against Combined Services convinced Gloucestershire officials that Milton was well worth trying, and they offered him an engagement for the next summer. 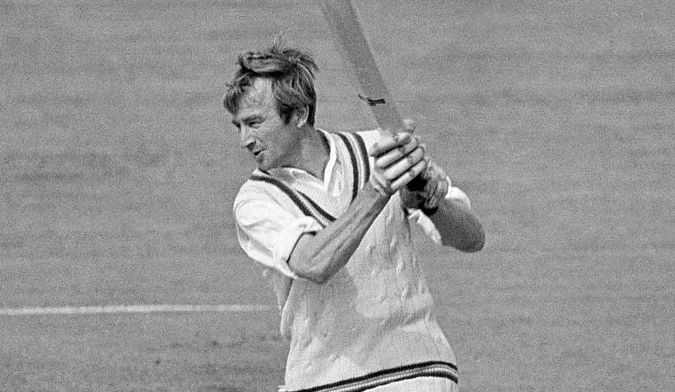 Consistent displays earned Milton his cap that year, but as so often happens with a bright newcomer, he suffered setbacks before recording his first hundred in 1951 – against the enemy at Taunton – and then he made his mark with a fine summer in 1952, when he scored 1,992 runs, average 43.68.

All this time, he batted in the middle of the order and the thought of opening the innings rarely occurred to him. In 1954, when Young broke a bone in his hand, Milton and Emmett opened and registered several century partnerships. In 1955, Young and Milton quickly made the opening position their own, and next summer, Milton became firmly established. Then, when everything looked rosy, he broke the scaphoid bone in his left wrist while playing in a soccer charity match in November 1956.

The bone, though very small, proved slow to heal, and Milton did not resume cricket until seven months later – lower in the order. Fortunately, 1958 saw him back to full strength and to the opening position, the place he eventually occupied in his first Test match against New Zealand at Headingley.

"He was quite happy at first in the outfield, but Gloucestershire gradually brought him closer and turned him into one of the best short-leg and gully fieldsmen in the country"

In summary, Milton, to the end of last summer, had scored 14,240 runs (1,000 in a season seven times), for an average of 33.98, and had hit 21 centuries. His highest score was 163 against Northamptonshire at Bristol in 1954, after he had been dismissed for a pair five weeks before at Northampton. His medium-paced bowling, varied with a little swing, brought him, during infrequent spells over ten years, 64 wickets for 50.98 runs apiece. He admits to regarding himself as a bowler nowadays only in an emergency, a modest underestimate of his usefulness with the ball.

As a fielder, Milton is worth his place in any team. A fleet-footed footballer, he was quite happy at first in the outfield, but Gloucestershire gradually brought him closer and turned him into one of the best short-leg and gully fieldsmen in the country. His agility and anticipation, in addition to very safe catching, twice brought him the county fielding award for most catches in a season – 44 in 1954 and 63 in 1956. He made eight catches in the leg trap against Sussex at Hove in 1952 when, before the awards were offered, he held 55 catches. 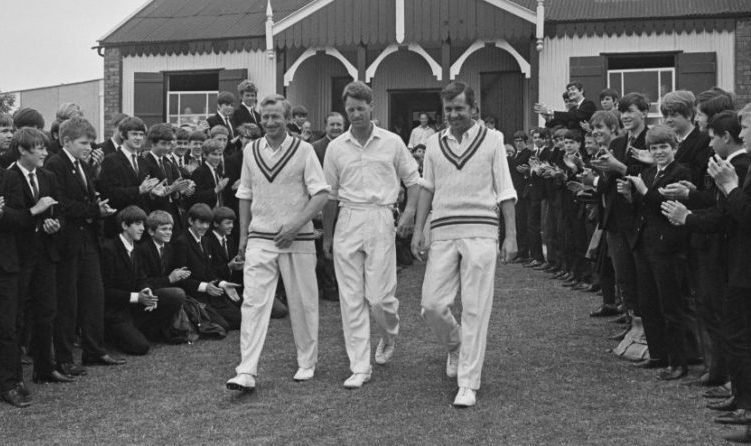 Arthur Milton walks out to take the field with Gloucestershire teammates John Mortimore and David Allen.

Milton recognises his indebtedness to Emmett, his last county captain, and his other Gloucestershire colleagues for valued advice during his years of learning and consolidation. His representative match career, starting with MCC against the Australians in 1956, did not commence auspiciously. He appeared for The Rest against Surrey in 1956, but few people, on what he had accomplished, were prepared for the startling success which came to him in 1958.

A century against Middlesex at Lord’s – his first at headquarters and also for two years – brought him to the notice of the England selectors, who were looking for a partner for Peter Richardson. Selection as a stand-by for Cowdrey in the second Test did not bring Milton his chance as the Kent player recovered from injury, but Milton eventually completed a notable treble achievement in the season with a hundred in his first Test match – 104 not out – and another on his first appearance in the Gentlemen v Players match. In this game, he received a severe blow on the nose at short-leg, sustaining a fractured bone which prevented his playing in the fourth Test. Soon fit again, he was chosen for the fifth Test.

Standing just over 5ft 9in and weighing 11st, Milton makes up for any lack of brute strength in his strokeplay by splendid timing. He has a repertoire of stylish – often elegant – strokes all round the wicket, with the drive, square-cut and hook his favourites. While realising the danger of hooking, Milton stands by this stroke, in England at least, because he is not often out through it. Many people thought Milton more attractive when he batted lower in the order, but Milton himself is not aware of any change in his style, except that he now declines, as a matter of basic policy, to take risks at the start of the innings until the shine is off the ball.

He believes in restraint in the morning, when the ball is swinging, and attack in the afternoon, when the bowlers have lost some of their bite. Milton’s defensive strokes have, of course, gained soundness through his change to opening batsman.

At soccer, Milton earned international recognition when outside-right for Arsenal, and was capped for England against Austria at Wembley in season 1951-52.