Angus Fraser’s qualities as the archetype English seamer were recognised when he was a Wisden Cricketer of the Year in 1996. His profile was written by a fellow Middlesex seamer, Mike Selvey.

It is a sight as familiar now as once was Trueman’s surge, Botham’s bull-charge or Willis’s manic flapping. Angus Fraser’s trundle begins with a shuffle, and gathers momentum as he picks up his size 13s and leans forward like a trawlerman breasting a brisk nor’easter. It is all rather inelegant and unathletic: a man trampling through a nettle-bed pursued by a swarm of bees.

This is only the prelude, though. He hits the crease with the minimum of elevation, and his delivery stride – short by any standard, let alone a man approaching six and a half feet – scarcely spans the width of the crease. There is no resistance in his action and he bowls through his run rather than setting himself. Nor does he bend his back. 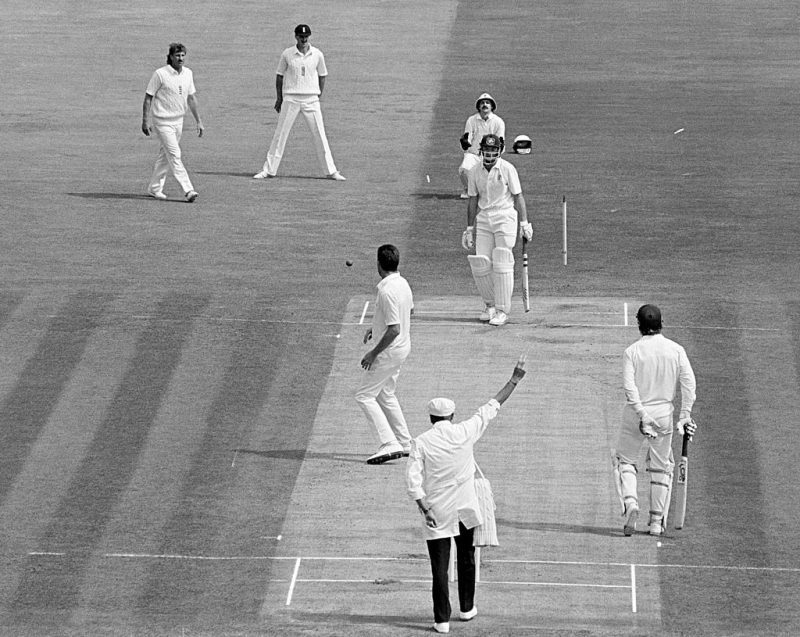 Not much for the purist so far. But now something happens. His front arm reaches out and inscribes an imaginary line to a point just outside the batsman’s off stump, tugging his bowling arm after it in a replica arc so high that his knuckles could snag on the clouds and pull them down. Unencumbered by being yanked out of plane, the ball can only follow the line. The geometry of it all is simple, and the result predictable, but it is a gift given to few.

Fraser deals in parsimony and red-faced effort. He is perennially grumpy, kicks savage lumps from the turf at a conceded leg-bye, and could murder a misfielder: the opposite to the millionaire spendthrifts who buy their wickets with boundaries. Somewhere, he believes, he can always get a cheaper deal. Runs are a commodity to be hoarded, not frittered away on the undeserving. This is Scrooge in flannels. Batsmen? Bah! Humbug!

"His front arm reaches out and inscribes an imaginary line to a point just outside the batsman’s off stump, tugging his bowling arm after it in a replica arc so high that his knuckles could snag on the clouds and pull them down"

There is a rationale here, though: he can dart and jag the ball around with the best of them on a sappy pitch, but when the going is tough and others do not want to know, he has another, more torturing, weapon: length and line. Throttle the lifeblood supply of runs with a garotte of accuracy and patience and you create anxiety, he will say. And where that exists so do wickets. 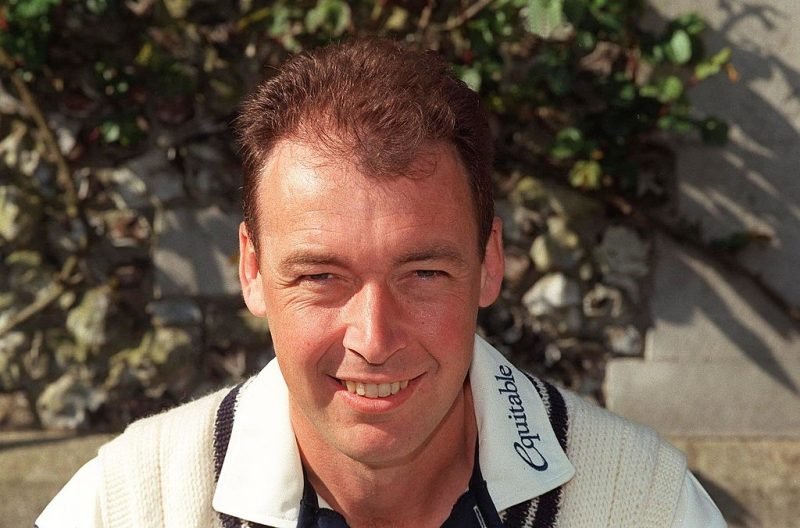 Angus Robert Charles Fraser was born on August 8, 1965, in Billinge, Lancashire, rugby league country, but the family came south when he was two, before his brother Alastair was born. Both went to play cricket for Stanmore and Middlesex. Alastair did not quite make the grade in county cricket. His brother is, as a succession of leaders will confirm, a captain’s dream. Ever since he found his way, belatedly, into the England side at Edgbaston in 1989 and announced himself by bowling Steve Waugh at a time when the batsman was beginning to appear invincible, he has given control.

Sometimes the deeds are unsung, not obvious to anyone except those in the game itself. On other occasions they manifest themselves gloriously. At Jamaica in 1990, when Gordon Greenidge and Desmond Haynes were threatening to destroy English morale terminally on the first morning of the series, it was Fraser, in only his fourth Test, who first of all held them in check and then tore them out with a spell of 5-6. England won famously. Then four years on, he conjured figures of 8-75 from the Bridgetown pitch when all around were wilting. England won again.

And yet the fates have conspired against him almost as much as his expression suggests. From his debut until the end of the 1995 season, England played a total of 65 Tests but Fraser took the field in just 29. Injury has played a large part, not least the debilitating hip ailment that manifested itself in Melbourne over Christmas of 1990, and which took two frustrating years from his cricket life. He missed 24 consecutive Tests, although when he did return for the final match of the 1993 Ashes series his match figures of 8-131 helped bring England a consolation win at the end of a trying summer. 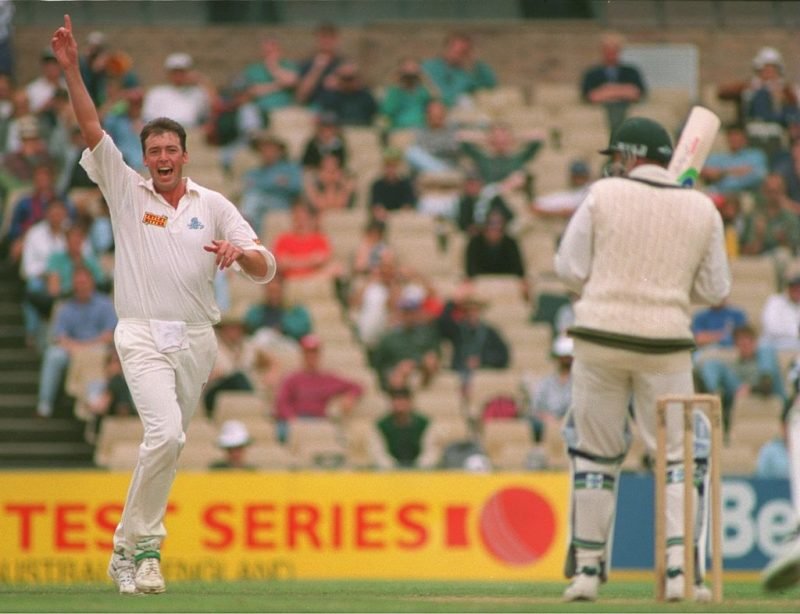 More mystifying, however, has been the reluctance of selectors to recognise his virtues as a thoroughbred Test-match bowler, mistaking his downcast demeanour – Eeyore without the joie de vivre – for lack of spark. In particular, Ray Illingworth’s decision not to include him in the party to Australia in 1994/95 amounted to nothing less than a dereliction of the chairman’s duty. He had, said Illingworth, not bowled well in county matches. The Australians could scarcely contain their delight and pummelled England mercilessly in the first two Tests until injury to others and circumstance demanded Fraser’s recall to the team. He promptly all but bowled England to victory in Sydney.

"He can dart and jag the ball around with the best of them on a sappy pitch, but when the going is tough and others do not want to know, he has another, more torturing, weapon: length and line"

Fraser only learned of his original omission when the side was announced on the television. The captain, Mike Atherton – who, possibly through embarrassment, had not contacted Fraser prior to the announcement – confessed only to disappointment, but it carried the flavour of hospital bulletins which describe the condition of multiple fracture patients as comfortable. For his part, Fraser admits he was devastated. “I was just so disappointed at the way it was done,” he says. “Playing for England means such a lot and if people treat you like that it makes it seem like it’s not such a big deal after all.”

Even then, the lesson was not heeded. At Headingley, for the first Test of the West Indies series, Fraser was in the squad but left out on the morning of the match. Rudderless, England were pulverised. Fraser returned next match to take 5-66 in the win at Lord’s. 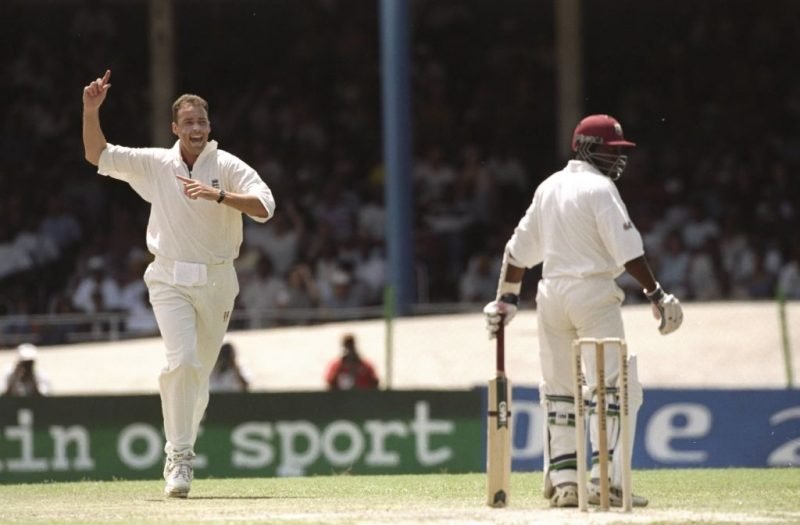 There may not be much left now and the best has undoubtedly gone. The hip injury blunted the edge, anyone can see that. But he has still been too good, too rare a commodity, too wholeheartedly English to ignore. And for all his talent, his confidence has been dented and his pride hurt. “All along,” he says, “I feel people have been doubting me. I’m proving myself all the time. Mostly I feel that I have to prove myself more than anyone else. It’s a bit sad.”