Andy Roberts was the first in a long line of great West Indian fast bowlers who began to emerge in the mid-1970s. After an outstanding first season for Hampshire, he was a Wisden Cricketer of the Year in 1975.

The name of Andy Roberts reverberated throughout the pavilions and dressing rooms of England’s county grounds last summer. He was little known when the season started, having made just one appearance in first-class cricket in this country and very few, although one was a Test match, in his native West Indies, but within weeks he was the centre of discussion, especially among batsmen, either in retrospect or awesome anticipation. They had, indeed, every reason to fear the unknown; in his first season Roberts won the race to 100 wickets and finished at the top of the bowling averages.

Yet it was only by a whisker, in the words of the Hampshire captain Richard Gilliat, that Roberts was engaged. He came to Hampshire in 1973 on trial and at the end of the season the choice rested between him and David O’Sullivan, the New Zealand slow left-arm bowler, as the county’s second overseas player. O’Sullivan had played a most useful part in Hampshire’s county championship success and, understandably, had his following, but genuine fast bowlers are a precious commodity and the vote just went to Roberts. The wisdom of that decision has now been proved beyond doubt. 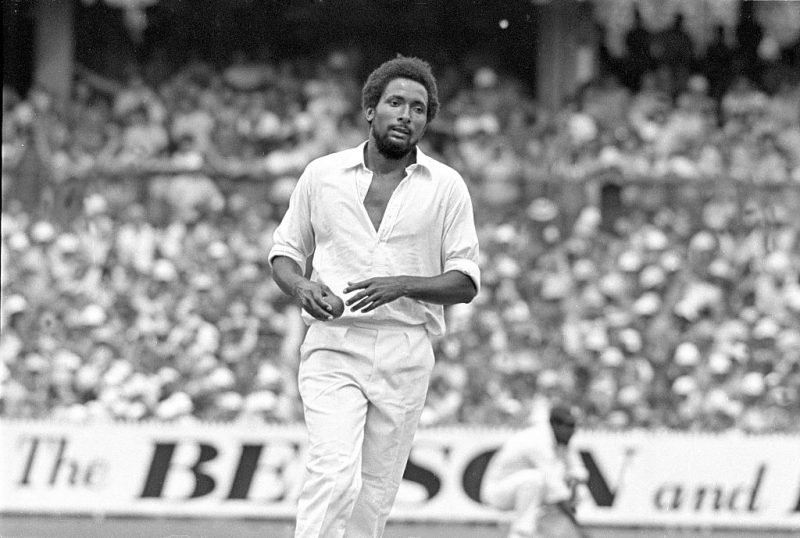 The sight of a man taking wickets by sheer speed stirs the blood and this was done so many times in 1974 by the man born as Anderson Montgomery Everton Roberts in Urlings Village in Antigua on January 29, 1951. To those used to the soporific sight of medium pace bowling at the end of unnecessarily long runs, the arrival of Roberts, who could produce blistering pace from his sprint to the wicket, reawakened the senses of excitement and expectancy. Here was man of action with magnetism which ensured the attention of all.

And his impact was all the more remarkable for the fact that he did not play his first game of cricket until leaving school at the age of 16. But the inclination had been there for, even with a tennis ball, he would bowl fast in the improvised games staged with his friends in the cornfields. At 16, he made his debut for the village, at 17 for his parish, St. John’s, and, a year later, for Antigua, along with Vivian Richards, now of Somerset and a Test player, too.

The young Roberts, son of a fisherman and one of a family of 14, had taken the first step towards a career in cricket, but he had to overcome parential opposition. “My parents are not cricket fans and they did not want me to take up the game,” he recalls, but he has now brought honour to them and Antigua. After playing for Leeward Islands, he won a place in the Combined Islands team, at the age of 20, for a match with Barbados in the Shell Shield, but success did not come overnight. Despite taking four wickets, including that of the great man, Sobers, on his first-class debut, he was dropped for the game with Trinidad. Then he was recalled against Guyana, when he took the wickets of Fredericks and Kanhai, and he held his place for the game with Jamaica.

"Everyone told me I would never play again, but I was determined to prove them wrong"

Again he took most wickets in the trials at the beginning of the 1972 season, but was not selected by Combined Islands for the first two Shell Shield matches. However, although he did not know it at the time, that season was the start of a major breakthrough. The Volunteers’ Cricket Committee in Antigua sent Roberts and Richards to England for coaching at Gover’s indoor cricket school and Richard Gilliat went to see them. He was impressed by both and, particularly, Roberts, whom Hampshire invited to come for a trial in 1973.

Roberts had a personal battle to fight before that trial materialised. He returned home for the 1972/73 season in the West Indies and, after playing in the opening Shell Shield game, he suffered a serious knee injury. He remembers that painful period well: “Everyone told me I would never play again, but I was determined to prove them wrong.” And this he did emphatically, showing the grit, courage and resilience which every great fast bowler must have.

He was out of cricket for two months, but was determined not to miss his trial with Hampshire and set out for England after just three comeback games, two for his club and one for Antigua. Thankfully the knee stood up to the test and Roberts took 40 wickets for Hampshire 2nd XI to give evidence of the rich promise which he was soon to fulfil so brilliantly.

Hampshire had to make their difficult decision first and they knew other counties were waiting eagerly should they decide against Roberts. They did not, of course, but had they done so Roberts would have almost certainly turned his back on English cricket. “I wouldn’t have wanted to join another county,” he said at the time. “I am very happy with Hampshire, but had they not kept me, I think I would have gone home for good.”

In fact, he did return home, but because he was invited back by the West Indies Board of Control. He suffered disappointment when he was left out of the squad for the series against England, but when injury forced Boyce to withdraw, Roberts was called up to make his debut in the third Test. His first Test victims were Old, Amiss and Jameson, but he did not retain his place and returned to England, his one-year qualification period complete, with something to prove either to Hampshire or, indeed, the West Indies.

Yet no one, not even Roberts himself, could have foreseen the tremendous impact he was to make in 1974 when his appetite for work removed any lingering doubts that may have been left by the knee injury. His figures tell their own story with 119 wickets at an average of 13.62 in first-class cricket, 21 at 10.76 in the John Player League and a total of 14 from Benson and Hedges and Gillette Cup games.

His stamina – over 700 overs in the first-class game – surprised some people, but not Gilliat, who learned to know and like Roberts quickly. The Hampshire captain says: “He is a very shrewd person, someone who knows what he can do and what he can’t. He responded to a lot of work magnificently and played through slight injuries, bowling fast when not fully fit.”

Roberts is well built, standing 6ft 2in and weighing 13st, and he is clearly a very fit young man who knows how to take care of himself. He likes to bowl in short bursts, 40-minute spells with say an hour off, and in this way is able to sustain pace. And who can challenge this method for he has become one of the world’s great fast bowlers, a man who generates speed through the air. He slants the ball, rather than swings it, and can also hit the seam and move it back into the batsman, but speed through the air is the real weapon. How else could he have claimed so many victims clean bowled on slow wickets last summer?

He is still learning his art, but the West Indies had no doubts in selecting him, along with his Hampshire team-mate Gordon Greenidge, for the tour to India and Pakistan. Roberts should remain a major fast bowler for a number of years and English spectators, if not county batsmen, should give thanks at the prospect.