Alf Gover, one of England’s oldest living Test players had two major parts to his cricketing life – a prolific fast bowler and a well-accomplished coach. His Wisden obituary profiled an immensely popular figure.

Alf Gover was the Mr Chips of cricket teachers. With his death, the mantle of being England’s oldest living Test player passed to Norman Mitchell-Innes, born in 1914, while GL (Lindsay) Weir of New Zealand, born like Gover in 1908, became the oldest Test cricketer worldwide. During the 1939/45 war, Alf Gover served as a company sergeant major with the Army Physical Training Corps, before rising to the rank of major in the Pioneer Corps.

As well as cricketer and coach, he was also a journalist, although whether he would wish to be remembered as the technical adviser to the leaden-footed 1953 film, The Final Test, is a moot point. He was president of the Lord’s Taverners in 1974 and of Surrey in 1980, and manager of two Commonwealth cricket tours to the subcontinent in the 1960s.

After a spell on the Essex groundstaff, 19-year-old Alf moved to The Oval in 1927, making his debut for Surrey at Horsham against Sussex in 1928. These were the summers of “Bosser” Martin’s impeccably groomed Oval wickets and of Surrey batting graced by Jack Hobbs, Andrew Sandham and others; bowling resources, not surprisingly in the circumstances, were scarce.

Born on the same leap year day (February 29) as Frederic in The Pirates of Penzance, he was, like that ambivalent buccaneer, “a Slave to Duty”, forced to act both as shock and stock bowler, galloping up his inordinately lengthy and somewhat ungainly run and hurling his thunderbolts hour after hour and over after over. Yet when he was opening the bowling in harness with Eddie Watts, his brother-in-law, Surrey were a formidable proposition for any county line-up in the second half of the 1930s.

At Worcester in 1935, he had taken four in four balls to complete his best analysis of eight for 34, having conceded 22 runs before getting a wicket. He scored only 2,312 runs, never made a fifty and held 171 catches. Catches, however, were regularly dropped off his own luckless bowling, so that he seemed doomed, like an Ovalite Flying Dutchman, to bowl eternally, the hand of foe and butter-fingered friend alike against him.

He played only four Tests: all were at home, against India in 1936 and 1946, and two against New Zealand in 1937. He was not too successful, managing no more than eight wickets for 359 runs, but he found some consolation in being the joint leading wicket-taker with Lord Tennyson’s team in India in 1937/38. It was on this trip that, stricken with dysentery in an up-country match, he continued his long run-up beyond both wickets, over the boundary and into the safety of the pavilion lavatory. 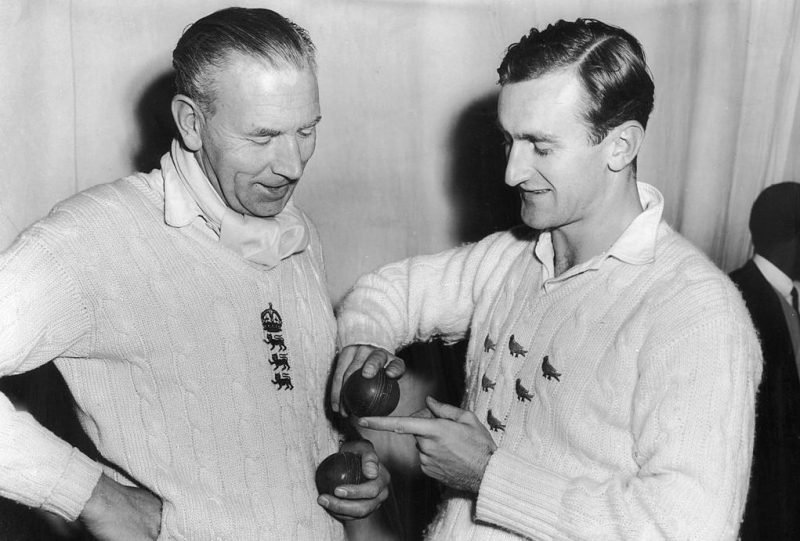 Ted Dexter (right) training with with Alf Gover at the latter’s Wandsworth Cricket School in London, circa 1955

For many years, Alf Gover was the proprietor of a legendary indoor cricket school in Wandsworth, south London, whither came for tuition not only the lowly but the mighty, including Tom Graveney, Ken Barrington, Viv Richards, Frank Tyson, Sunil Gavaskar, Andy Roberts and Brian Lara. It had been financed in 1928 by his future father-in-law, Bill Brooke, with Andy Sandham and Bert Strudwick as the active partners.

Gover married Marjorie Brooke in 1932, and one of their sons, John, later ran the cricket retail side of the school. Alf’s real interest began in 1938, and by 1954 he had obtained sole control of the premises, with its four low-slung nets. He was shrewd in his choice of fellow-tutors, employing coaches like Arthur Wellard, and he continued to bowl there until he was over 80. He finally retired in 1989, still kindly, smartly attired and upstanding. His coaching ensured that his fame was less dimmed in middle and older age than that of his peers, some of whom, without such a focus, faded from memory. At the last, none the less, it is as part of the Surrey scene of the 1930s that he will and should be remembered.

Gover, Alfred Richard, MBE, the Mr Chips of cricket teachers, died in south London on October 7, 2001, at the age of 93.