Alec Bedser, one of England’s greatest bowlers, died on April 4, 2010. His friend John Woodcock wrote this tribute in the 2011 Wisden Cricketers’ Almanack.

Alec Bedser was one of the great bowlers, and someone to whom commitment was the first commandment. That he remained wedded to cricket until his dying day, and got out and about until into his nineties, made him a national treasure, chunter though he would at an open-chested bowling action, the absence of a third man or for want of a pint of bitter.

Through having served six years in the Second World War, by the time his career started in earnest he already had something of the veteran about him. His bowling was essentially a product of the English game as it was played for the first two-thirds of the last century. Still being uncovered, the pitches encouraged lateral movement at medium-pace to an extent seldom found elsewhere, and that was Bedser’s stock-in-trade. 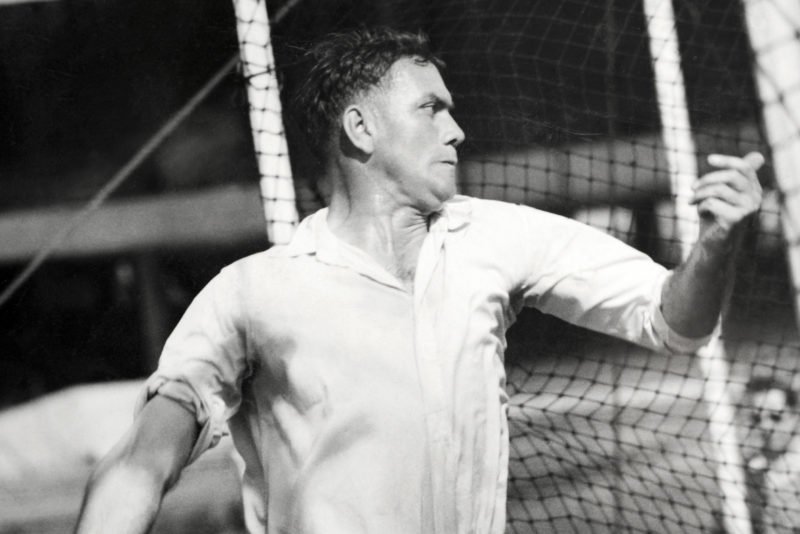 “Bedser was one of the great bowlers, someone to whom commitment was the first commandment”

He followed in the correspondingly imposing footsteps of Maurice Tate, of whom R. C. Robertson-Glasgow wrote, as he might have done of Bedser, that “he had many imitators but no equals”. They were both supreme in their day, and, as if to quell all argument, each had his triumphs in Australia as well as England, Bedser’s 30 wickets there in 1950-51 being heroic in the same way as Tate’s 38 had been in 1924-25, also in a losing cause.

Such is the emphasis placed now on fitness, agility and bowling speed that it is perfectly possible they would both be left on the rack today. More with regret than rancour, Bedser would say so himself. But to his contemporaries, he was the champion, and you can ask no more than that.

One could but marvel and despair at the frequency with which he beat the bat on the first morning of the second Test at Melbourne on that tour of 1950/51, a spell of bowling which prompted those who had seen or played against the legendary Sydney Barnes to compare the two. Neil Harvey, already a very fine player, was as utterly confounded as Warren Bardsley, Clem Hill and Victor Trumper must have been by Barnes on the same ground 39 years earlier.

He remained wedded to cricket until his dying day, and got out and about until into his nineties

Bedser’s chief pride and joy was his bowling action, the culmination of a methodical yet rhythmical run-up of no more than six full strides. On average he took two and a half minutes to bowl an over. He had the frame for the job, the heart to go with it, and big hands. The ball with which he bowled Don Bradman for nought in the fourth Test at Adelaide in February 1947, a fillip like no other, had a lot to do with the size of his hands.

Often referred to as the perfect leg-cutter, and by Bradman as being as good a ball as ever got him out, Bedser always insisted that he didn’t cut it but that he spun it, which he was able to do because his hands were so large. His natural movement in the air was into the right-handed batsman, and that, when followed by what amounted to a fast leg-break, was some combination. He spurned the outswinger, mainly in the interests of accuracy. 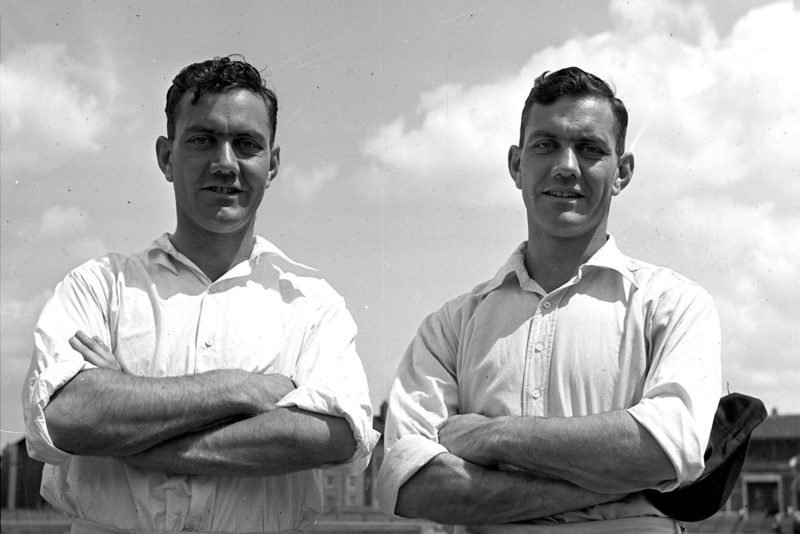 Alec Bedser (right) pictured with his twin brother Eric, who also played for Surrey and England

Bowling was Bedser’s abiding interest, the theory of it as much as the practice. No one ever went to him without coming away the wiser. This was particularly so during his days on the county circuit, and the younger players loved him for it. He enjoyed playing the part of the guru. When James Anderson was starting to make a name for himself, Bedser, by then in his mid-eighties, wrote him a long letter in his own hand with what he hoped would be helpful suggestions.

When he was managing the England side in Australia in 1974/75, I can see him now laying out a page of Melbourne’s Age, then a broadsheet, on a net pitch as he set about drilling Mike Hendrick in the adjustment he would need to make to his English length on Australia’s faster, bouncier pitches. And when I said to him one day that I had a great nephew who was showing a bit of form as a right-arm spinner, his message was typically brief and to the point: “Tell him to bowl over his left shoulder,” as Bedser himself had done so inveterately and for so long.

There was a native dignity about Alec – a gentle homespun humour, a candour, an incumbent melancholy and a liking for the old ways

Bedser finished playing in 1961, the end of his Test career precipitated, unhappily, by a bout of shingles on the 1954/55 tour to Australia, barely a year after his having taken a record 39 wickets in the Ashes series of 1953 in England.

As a manager and selector of England teams for 23 years after his retirement, he cared almost to a fault. Nothing was too much trouble to him, other than coming to terms with all the changing proprieties of a sportsman’s life.

Once, when paying his customary visit to the England dressing room after a day’s play at The Oval, either as chairman of selectors or manager of the side, he heard a strange whirring noise. “What’s that?” he asked Tony Greig, the England captain. “Bob Woolmer’s hair-dryer,” came the reply. “Hair-dryer,” said Alec, “what’s wrong with a bloody towel?”

As Woolmer had just made a hundred and England were playing Australia, Bedser needed to be careful not to seem to be ridiculing him – but, to the old-timer, hair-dryers were for women and always would be. Just as “strength and conditioning courses for bowlers”, to use the current term, were best spent not in the gymnasium but out in the middle, bowling, or even digging the garden. 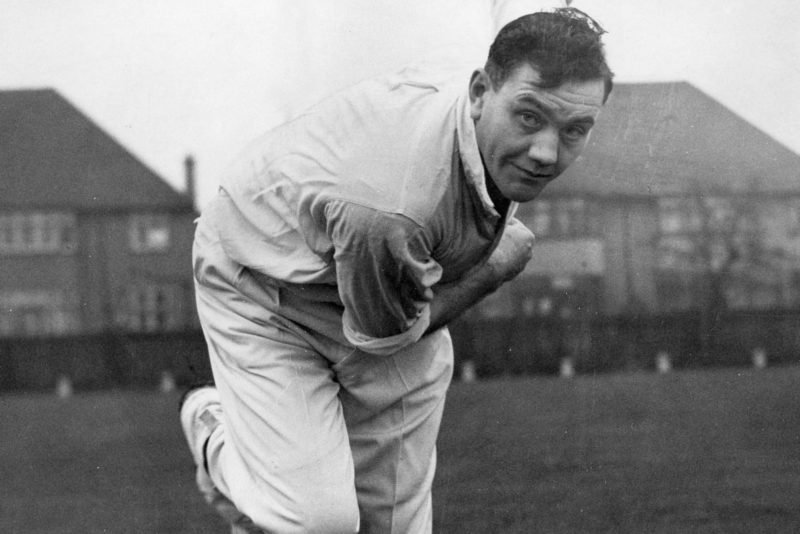 Bedser’s chief pride was his bowling action, the culmination of a methodical yet rhythmical run-up of no more than six full strides

Not even Sir Pelham Warner and Lord Hawke between them can have helped to pick more Test sides than Bedser, and he had a remarkable memory for all the whys and wherefores of the different eras. More than anything, selectors need genuine all-rounders to help them out, and for his last few years Bedser was fortunate in having Ian Botham round whom to build a side. The successful decisions to bring back Mike Brearley as captain in 1981 in place of Botham, and to plump for Ray Illingworth ahead of Colin Cowdrey to lead the side in Australia in 1970-71, were not quite as straightforward as they may seem now.

Bedser was not, I think, given to agonising over things, but he always wanted to see justice done. The irony was certainly not lost on him when, 36 years after the selectors, under Bedser’s chairmanship, had felt obliged to suspend Tom Graveney for three Test matches for “a serious breach of discipline”, the villain became president of MCC!

From the days when, as a member of the groundstaff at The Oval, he had to do what he was told by Mr Holmes and Mr Garland-Wells, until he was assured of a right royal reception at Lord’s and knighted by the Queen, Bedser’s career has nothing in cricket quite to match it. It would make a good film if twins of the right shape could be found to play Alec and his identical and inseparable brother, Eric, who predeceased him by four years. They would be seen getting away together from Dunkirk, and their mother would be heard to say “But that’s what he’s paid for, isn’t it?” when asked what she thought of Alec taking 11 wickets in his first Test match.

Alec must have taken after his mother. I wasn’t there to see him bowl Bradman at Adelaide in 1947, the most famous of his 236 Test wickets, but I saw most of the others and each one brought no more than a nod of satisfaction. The hugging and mauling which go on today, and that he would have so detested, had yet to come in. There was a native dignity about Alec, besides a becoming unselfconsciousness and gentle homespun humour, a candour, an incumbent melancholy and a liking for the old ways, which all went towards making him the institution he was – along with his indomitable bowling.