Alan Oakman was the last survivor of the England team who played in ‘Laker’s match’ at Old Trafford in 1956. As his Wisden obituary pointed out, he had a close-up view of the action.

Alan Oakman was at home in Hastings one July evening in 1956 when a policeman popped by with an urgent message from England’s chairman of selectors. Gubby Allen had enlisted the Sussex constabulary after discovering Oakman was not on the phone. Tom Graveney was injured, and Oakman was needed at Old Trafford for the Fourth Ashes Test. He gathered his kit, and drove north to take his place in cricket history.

Stationed in the leg trap, he had a close-up view as Jim Laker collected 19 for 90, the greatest figures in first-class history. He took five catches and, thanks to the television and newsreel commentaries, became forever linked with Laker’s achievement. “When Jim and I met up afterwards, he would always say: ‘Are you still living off those five catches?’” They were just as well: Oakman had been given only eight overs in Australia’s second innings, and made ten from No.7. His second Test was his last – there were no more visits from the Hastings police. He was the final survivor of the England team from Old Trafford. 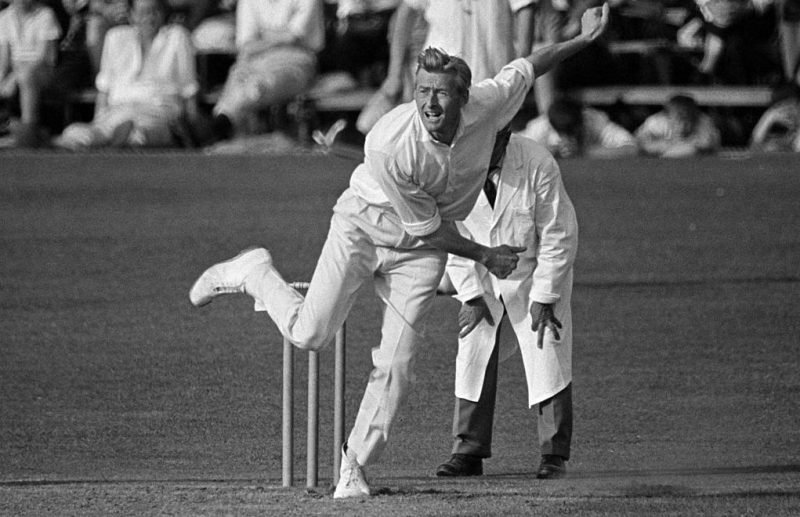 Alan Oakman bowling for Sussex, circa 1966. His teammate, Jim Parks, described his bowling as ‘interesting to keep to’

But Oakman was not the sort to dwell on his thwarted career. As an opening batsman and prolific off-spinner, he was a significant figure at Sussex: ninth on their all-time list of appearances, 11th for runs, 17th for wickets – and second for catches by a non-wicketkeeper. After leaving Hove, he coached Warwickshire, winning the Championship in 1972. The next quip was never far away: Keith Cook, then Warwickshire’s membership secretary, said Oakman could make you laugh while proof-reading the fixture list.

He had joined Sussex straight from school in 1947, initially as a bowler, and made his debut that summer, aged 17. His second wicket, on his second appearance, earned a “well bowled” from his victim, Denis Compton. But it was not until 1950 that Oakman had a run of games, and not until 1951 that he was established. The following season, he took 83 wickets at 27, including a hat-trick against Somerset at Hove. And after working assiduously on his batting, he passed 1,000 runs for the first time. Gradually, he moved up the order, and became a regular opener.

'There was this great, lanky chap strolling out to the middle, as unconcerned as though he was walking down a Sussex country lane.'

At 6ft 6in, with a mop of blond hair, he was hard to miss. “As a batsman he was steady,” said team-mate Jim Parks. “With his height, he had a long reach, which meant he was strong driving off the front foot.” His best year with the ball was 1954, when a late-summer purple patch took him to 99 wickets at 20, including a career-best seven for 39 against Glamorgan at Eastbourne. “He was interesting to keep to, because he really made it bounce on hard wickets, and he was quite a big spinner of the ball,” said Parks.

Early in 1956, Oakman underlined his potential by making 80 for MCC against a strong Australian attack at Lord’s. He was called up for the Third Test at Headingley and, batting at No. 3, was not overawed. After Colin Cowdrey was dismissed by Ron Archer in the fourth over, he was surprised to find the new boy passing him before he was halfway back to the pavilion. “There was this great, lanky chap strolling out to the middle, as unconcerned as though he was walking down a Sussex country lane.” But Oakman made just four in England’s only innings, and didn’t bowl. 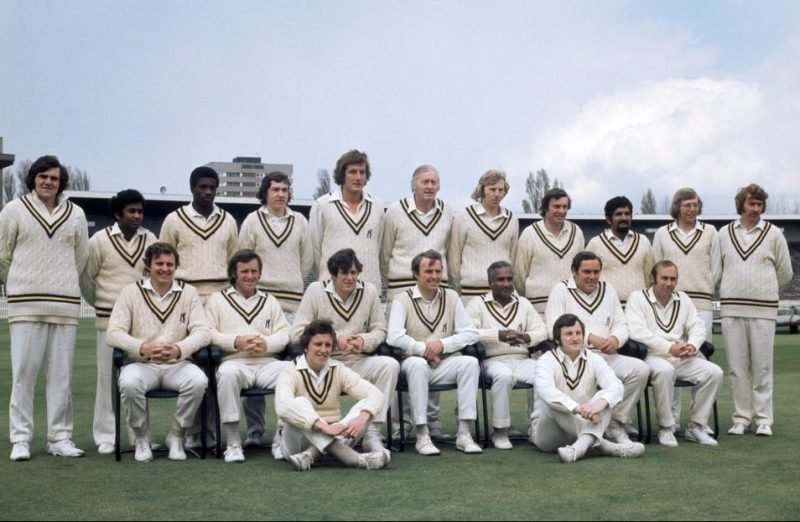 Alan Oakman (fifth from left in the back row), coach of Warwickshire, with the team in 1974

He was dropped for Old Trafford, only for Graveney’s finger injury to grant him another chance. Despite his reputation as a sharp close catcher, he started at mid-on. Accounts vary as to whether it was David Sheppard, concerned about his own reflexes, or Laker who suggested a switch. Either way, Oakman was soon standing perilously close at short square leg. “Jim was so accurate that you didn’t worry too much, particularly on that pitch,” Oakman recalled.

“I fielded closer than usual, and I knew I didn’t have much chance of being hit. Keith Miller said to me: ‘Oakie, that’s a dangerous position. If I middle it, they will have to carry you off.’ Three balls later he pushed forward and I caught him low by my ankle.” Miller was his second catch of the first innings, following Ken Mackay; in the second, he caught Colin McDonald, Mackay again, and Archer. His record of five catches off the same bowler has been surpassed only by Mahela Jayawardene’s six off Muttiah Muralitharan for Sri Lanka against Pakistan at Peshawar in 1999-2000.

Related Story: Quiz! Players with the most men’s ODI appearances since 2015

That winter, Oakman was chosen to tour South Africa, but did not play in the Tests, and suffered a serious back injury which meant he missed most of the 1957 season. He retired in 1968 after 497 first-class appearances for Sussex, spent one year on the first-class umpires list, and in 1972 took charge of the one-day international against Australia at Edgbaston, stepping in at the last minute, when Arthur Fagg was unwell. At the same ground in 1973, he walked out alongside Dickie Bird on the third morning of the Test against West Indies, after Fagg refused to take the field in protest at verbal abuse from Rohan Kanhai; Fagg appeared at the end of the first over.

Oakman became a much-loved figure at Warwickshire, especially as Second XI coach. “He was a great encourager,” said Bob Willis. “So many of the players he fostered helped us win the Sunday League in 1980. He instilled a positive attitude and ferocious fielding. Handling a Second XI was a difficult balancing act – not allowing the youngsters to be affected by the cynicism of the old pros who are out of the first team.”

In a eulogy at his funeral, John Claughton, one of his former players, said: “He created a team and a culture and a world in which we all felt we belonged. We loved playing for him, and one of the reasons was that he behaved like a dashing, slightly untrustworthy uncle taking his teenage nephews on an outing.”